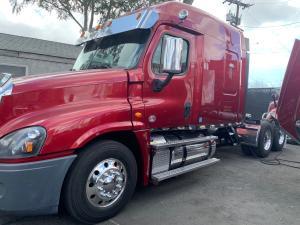 Switched to Local Driver/Home Daily Yankin Containers off the hi-line in the worlds sixth busiest Port of Long Beach, California...20s,40s,45s and reefers with all TWIC card and Hazmat endorsements.

Mocean Transport LLC founded in 2018-After 4 years and 4 months of making my bones I secured my own operating authority, then purchase a small fleet strictly for intermodal transportation in the Port of Long Beach, Califoni

Mocean Transport is a Long Beach, California, based drayage and container company specializing in dedicated capacity, solutions originating from the Port of LA/Long Beach. We cover short haul and long haul lanes all over California, Nevada and Arizona. Our land-bridge reach also extends out of rail ramps in the Greater Los Angeles metropolitan are at ICTF and BNSF rail yard locations..

Why would a local company cut the fuel line feed to the second tank? Is this legal? Asking for a friend...

Yeah I just made the decision... seen two swathes in the last two months that could’ve been avoided thanks for the heads up !

So I left OTR sometime ago for a glorious local gig yankin’ containers from the port.... mostly because I have a young son and wanted to be home daily. Truth be told the company doesn’t take care of their equipment won’t do the way fixes like gas gauges, replace broken emergency triangles, extinguishers and I just found out recently that they cut the fuel line to the second tank ...and the owners excise was and I quote “we are a local company....we don’t use the other tank” To my horror this is the first time I have heard this? For the veterans out there to a guy who has only been driving two years is this a thing ? Is cutting the fuel line to the second tank even legal?

I'm no expert, but I don't really see a "problem" with removing the second fuel tank. But with some of the other issues you mentioned, broken safety triangles and fire extinguishers, I think I'd be moving down the road.

Why would a local company cut the fuel line feed to the second tank? Is this legal? Asking for a friend...

So I left OTR sometime ago for a glorious local gig yankin’ containers from the port.... mostly because I have a young son and wanted to be home daily. Truth be told the company doesn’t take care of their equipment won’t do the way fixes like gas gauges, replace broken emergency triangles, extinguishers and I just found out recently that they cut the fuel line to the second tank ...and the owners excise was and I quote “we are a local company....we don’t use the other tank” To my horror this is the first time I have heard this? For the veterans out there to a guy who has only been driving two years is this a thing ? Is cutting the fuel line to the second tank even legal?

Does anyone happen to know about DTI/Bulk Tanker orientations? Is it a UA test or hair follicle test ? Anyone ever work here They just terminated the Compton terminal manager! Hepfil if anyone of you truckers have ever went thru their company orientation and actually worked there! Thanks !

As a new truck driver making his bones with a little less than six months OTR, and with only dedicated experienced above and beyond that what I found were drivers who were disoriented, disgruntled about the recruiting process.

What I found were many truck driving veterans (many of which had left and found their way back to OTR) and newbies who have been beatin up with lies from truck recruiters who were staffed by the very companies that not only hired them but screwed them after they were initially hired.

Why isn't there an app that streamlines our DACs, MVRs, employment history, resume and other personal information readily available to the world for a nominal fee, so that the 3.5 million drivers in North America can make seamless changes in companies whether we are wanting to team, go solo, drive tankers, heavy haul, cattle haul or go local with intermodal?

This would literally "kill the middleman" and get us through the mud of lying recruiters, dicey companies who run drivers unsafe and since truckers have insight to most companies---- our moles are already there ie. sorta like Yelp for truckers but an app both mobile and desktop ready that could service our needs that both trucking companies can tap into as well as the truckers themselves?

After graduating from Crowder Trucking School in Neosho, MO. I was bombarded with the who's hiring scenario almost daily and the forums (yours is fantastic by the way) that i joined to self educate myself are really the only mediums out there for everyone,

Truth is there really should be an app for this, I know that you said you have jobs available on your sight but there are so many companies with 300+ fleets that are not mentioned here....yet somewhere in your forum there is a lady or gent or team working for that very carrier! so the potential for us as drivers to log, document and file real time information...thus assisting in a seamless transition and bottom line the right choice for said driver.

A different view of team driving before going solo

Please out of respect for drivers, trainers, truckers everywhere and beyond please do not pass judgement i have been watching you troll different blogs, and I gotta say that God gave us two ears and one mouth so that we listen twice as much as we spek.

You are not an instructor......stop instructing,

Listen to the veterans, ask questions, craw before you walk, walk before you jog, jog before you use three points of contact to get into your vehicle, pre-trip before you hold a public forum or throw shade, buckle-up before you hit us proud truck drivers with safety advice yourself,

To ensure that you are the king of your own kingpin make sure there is not only not a gap between the apron and the platform but also one in your own judgement of others, like us who are damn few, yet proud bunch,

This is the beginning of the third week at Crowder College Trucking School, a five week program and I'm pretty stoked, pre-tripping, and taking the Goodman route though town.

Feels like the rookie blues, but we all gotta start somewhere right!

Parallel and offset parking with no alley-docking as of yet. Trip planning along with in cab and air break test still feels like new must learn components but it's being beat into our brains along with safety measures in and around the crossbars at the dos and don'ts at railroad crossings.

Downshifting is still a little trough and varies from truck to truck on all 10 to 13 speeds. I've talked to some veterans heavy in the game and they have informed me that it took them as long as 6 months to get comfortable with the shift while still missing gears today with the caveat being that of "recovery".

Class is fairly small with a start of 15 students and an end result of 13 total for the remains three weeks.

Instructors are a class act with easily over a 100 years experience between the whole lot of them.

They are frank, forward, professional and still want you to have fun in the process.

I highly recommend it if your changing careers---

How does everyone handle the low pay and contract issues with this company...need my CDL's but am hearing many bad things about the company but I need a steady job.

Thoughts? Any advice is welcome and much appreciated!

Cheers and Keep on Trucking!