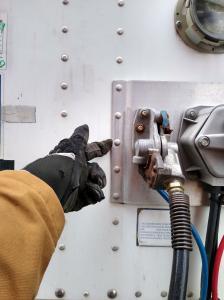 Have some class B experience under my belt, making the leap to get my class A now!!!

Upgrade from a class B to a class A

Hey TT. The tree service i work for informed me this week that they want me to upgrade my CDL from a B to an A so i van drive the log truck and haul our 10,000 lb+ equipment trailers. I live is michigan so what would be the best way to go about upgrading to my class A? Is school required or could I pass the test and get in my required training at our shop/mulch yard and pass the road test to get up to a class A? Thanks in advance!

If you're company has a Class A truck lying around if one of the guys there doesn't mind teaching you what you need to know, then you could just pay STAR to rent a truck and test there after they feel you're ready to test.

If you think you're trainer is bad then wait till you get around a security guard that is having bad day. That will make you tough up really QUICK.

I get being sensitive, and I get feeling that you are not getting enough explanation to fully understand, but even the nicest, most understanding instructor or trainer will sometimes give you a nice firm tone to let you know you're messing up.

I'm a bit sensitive myself, and some of the things my trainer said to me when I messed up I'd take to heart, I'd never express it, but I'd sure as hell would feel it. It gets even harder after training cause of a lot of these shippers, unloaders and what not will be super rude. These older guys are not lying when they say you need a thick skin.

A poo, I nearly forgot about this thread. But I'd figure an update is in order. So after having to do a 5 weeks instead of 4 weeks of training I was finally able to take my test, and as off 1/3/2020 I have officially obtained my class A CDL. The test was just as nerve racking as I thought it was, the 90 almost dude me in, but with two pull ups I was able to get right on the box. Road test was breeze, only got about 8 point which was pretty good for my trainers averages.

As of now though, I've been rolling with a trainer, one Tuesday I'll be entering my third week, and rolling into my final week. I've battled against the crazy traffic of Detroit, backed into many docks, including and enclosed dock(😣 that one was fun especially being new), and hit rural roads, as well as deal with some black ice early into my training I've done a lot but have Soo much more to learn as I work my way up.

Although I'll probably end up switching from the local division to either their regional, or OTR division around the spring time though. I'll try to check up on this thread again on the last day of my time with my trainer, and towards the end of my first month solo.

Other than that, I wouldn't have been able to achieve this if it wasn't for all the resources, and the help tips I've seen from lurking this forum.

Alright, so a little bit about myself before I get into the meat and potatoes of training. I saw a post from some other guy who went through them, and that helpped me with my decision to go, other than having a kid on the way, and not really being able to go OTR due to that. So if they are still there I hope I get to meet them and thank them.

Long time lurker, this site helpped me get my class B at my last job when I had to cram knowledge in my head a full two weeks before my test. Hadn't even drivin in a class B truck, or had time to practice basic backing maneuvers, but I passed on the first go, hopping that magic can happen for me while I'm training.

I already have my hazmat endorsement since I had to get for my other job, so all I really had to do was take the combination vehicle test and I was ready to roll. My date to come in was set Nov 25th, they even booked a hotel for since driving to and back from my city would burn up a lot.

Week 1 Day 1: So day one was signing a bunch of paperwork, and watching a ton of videos that had already watched at my old job. You guys are killing me with the J.J Keller videos, bit after few hours of that I got to go meet my trainer, and we'll he's a pretty swell dude a bit abrasive sometimes, but overall down to earth. I got to go through some pre-trip stuff, and got to familiarize myself with features of the truck didn't get to drive since that was just Orientation.

Week 1 Day 2: So my second day began, and I was told to be there by 7:30, pretty damn cold out, but it's winter time so what could I expect? Cool breezes and a nice warm sun, nah. My instructor showed me how to punch in, and some other stuff before we went back to the trailer to do some computer test before I went to sign my contract, so I could really get to learning. After the signing of my contract I was finally able to take a deep dive, and get started. We went in really deep with some driving off the bat, of course the instructor drove us bobtail up to the little yard they have a couple miles away so I could get a feel for the truck, with me having been driving a straight truck for a bit, driving the truck bobtail wasn't really too difficult to do. Well neither was driving it with a trailer, but I spent more time getting acquainted with how the truck felt with a trailer than I did without it. After a few laps around the yard, and getting comfortable we went out and drove in live traffic, nothing too hard it was quite the breeze, except there was some event going on and there was some guy in the road and it was on very tight turn, I kinda seized up, but made the turn pretty well. After that we dug into some backing and I got to do some straight line backing, was much tougher than I was excepting, but I was able to get the hang of it after a couple tries, was feeling very good about myself.

Either way after that we went back to the main yard,and I practiced pre-trip for the rest of the day, and then clocked out.

Week 1 Day 3: Last day of my first week due to Thanksgiving, didn't really get to do much driving that day on the account that the wind speed was about 20mph. No biggy for me, but seeing as this is a whole new best compared to the straight truck I drove, and got rocked by all sorts of wind speeds, it would end up be a j.j Keller course day, so really not much to say about it.

Week 2: So I'm gonna kinda streamline thought this week seeing as it was my first FULL time week of training, so I'll try to keep it to major details.

So pretty much punch in at about 7:30 every day, and did pre-trip for the first few hours of the day. It's pretty Cole out so I'd do it where I didn the incab first, followed by reading the visual aid for the pre-trip, and then going outside to do the actual pre-trip. Boy was I freezing. Got to do some more driving and got to go meet the the lady who's going to be testing me at the third party company they use to test out their DTP guys. She's very nice, and very talkative, definitely alot more than the guy took my class B with. We stayed and watched some guys do their offset and some other back manuvers before we drove back to the main terminal. The next day after that we got deep into some backing and I got to do the straight back, and also did some offset backing. Needles to say it was pretty tough at first with him in the passenger seat, but later on in the week I was in the truck myself and doing it. Sadly my setup is a bit sloppy on both, and I come out on an angle, nothing to bad straight line backing is easy just have to catch it, and then back it on through, but the offset is something else. I'll be at an angle at the start. I'll hit all my marks, and have down to the T, but because of me being at an angle at the start I usually have to do a pull up just to get it to go in. Hopping that since Monday is going to be when we doing a full day of backing that I will get my setup good, so that we I can just straightline back it in once I'm close enough, but other that the week went by pretty fast and smooth.

Well, that concludes my first two weeks of training for now. Tomorrow is my third week, and it felt as if things have been really flying on by. I'm very confident in my ability to do this, so I'll will push on with as much determination as I can. Until next Friday, KEEP ON TRUCKIN.

P.S. I'm already about to reach the character limit so any additional info will be added in my next post.