A New Era For The Knights Of The Road

A New Era For The Knights Of The Road 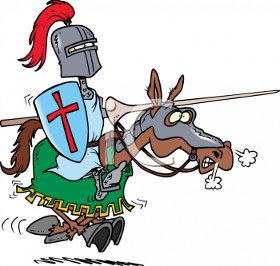 In the past, truckers were known as "Knights of the Road". They used to have a reputation for helping people whose cars became disabled and had to pull their vehicles to the side of the road. People always expected a trucker to help them when they were in distress on the highway, and their big rigs were seen like the heroic mounts of the always-helpful truckers. Those days are long forgotten, though, and over time the truckers and their rigs have lost their knightly reputation. Truckers are no longer depicted in a positive light and the situation looks like it may be getting worse for a number of reasons, including our own (lack of) pride and personal discipline, attitude, driving skills, and factors outside of our control including the media, more dangers on the highway, and recent waves of terrorism. Is there anything we can do to improve our reputations? Oh indeed there is plenty we can do.

Back in the day, it was common courtesy to pull over and help a stranded motorist. Nowadays, there are a whole list of reasons why this is a bad idea. For one, if your truck is sitting on the shoulder of the highway and gets hit by a passing vehicle, you could very well be the one held accountable, your company could become the target of a lawsuit, and you could possibly lose your job. It's dangerous to passing traffic and it's risky to the truck driver to be parked on the shoulder of a highway.

On top of that, we've all heard of criminal schemes where someone will pose as a stranded motorist as a setup to rob or kill people who stop to help. One of Trucking Truth's bloggers and OTR driver TruckerMike had this to say:

"As far as simply helping motorists on the highway, this is an area that saddens me as a truck driver. It is extremely unfortunate that we never know who people are and what their intentions are. I'd love to give people rides. I'd love to pull over and help a stranded motorist. But you just never know. These days, with cell phones, it's better to simply call the highway patrol if you see a stranded motorists. Back in the day before we had cell phones, it was different. But now, help is only a call away." - TruckerMike

Indeed it's far safer and more prudent nowadays to call 911 to help the stranded motorist and let the proper authorities handle the situation. So if you want to help what appears to be a stranded motorist, a simple call to 911 is the modern way to be a "Knight Of The Road".

The Threat Of Terrorism

In recent years, a series of warnings and bans related to the trucking industry have arisen as a direct consequence of terrorism. One recent policy banned truck drivers from operating in the immediate vicinity of the White House. This has turned the former honorable warriors and their steeds into frightful, dangerous monsters. Terrorist have been known to build bombs and hide them in trucks until they are transported to their destination and detonated. This frightful presence of trucks has not been ignored by groups inside the trucking industry, and their members are struggling to improve the way truckers and their vehicles are seen. Interestingly enough, by helping with the war against terrorism, the celebrated Knights of the Road may soon rise again.

Groups are organizing truckers to keep an eye on tunnels, bridges, and other transportation infrastructure, as well as to provide a first line of defense against any attempt of hijacking vehicles and other acts of terrorism. The trucking industry has already implemented anti-terrorism action plans in several parts of the country to train drivers in procedures regarding observation and communication. Fortunately these programs from time to time appear in the news and press releases, thus improving the image of the trucking industry. So by calling in any suspicious activity we may consequently see the reputation of truckers as Knights of the Road once again, this time as defenders against terrorism.

TruckingTruth's founder Brett Aquila, a driver for 15 years, added this:

"It always amazed and disappointed me to realize just how many people hate, and I mean hate truck drivers. I must have heard that a thousand times over the years, especially from dock workers, 'I hate truck drivers'. Whenever I asked why, the answers generally boiled down to a lack of respect for the drivers that were either wearing filthy clothes, were morbidly obese, smelled like they've been living in a dumpster, had a horrible attitude, or sometimes all of the above.

"It's time that drivers started taking more pride in themselves and started acting more professional. You've heard the adage 'You will attract more flies with honey than with vinegar', well it's true. Being kind and professional will get you loaded or unloaded faster than getting angry and threatening people. Driving safely, dressing respectfully, staying in reasonably good shape, looking and smelling clean, and smiling and joking as much as possible will go a long, long way towards being treated with more respect and getting back our 'Knights of the Road' reputation. There are some things that are out of our control, but until we start showing a little pride, self-respect, and positive attitude, we can't expect the general public to show us much in the way of respect either." - Brett Aquila

Getting Out There And Doing It

So there's a nice little starter plan that can help restore our image of "Knights of the Road". Get out there and do your part - drive safely and with consideration, make a call to help a distressed motorist, report any suspicious activity, look and smell clean, and have a great attitude. If drivers will begin doing these things, our reputation will begin to be restored to where it once was - "Knights Of The Road".

Truck driver appreciation week has come and gone and we've created some reasons why truck driving is so difficult and should be appreciated.

Controlling costs in trucking is critical to the success of trucking companies, and drivers should be doing their part to help - for their own sake.