Are Drivers Too Expensive?

Are Drivers Too Expensive? 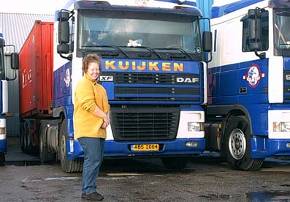 Let me first introduce myself. My name is Angelique ... AngeliqueBS on some discussion forums - which, by the way, BS does not stand for BullShit in this case. I live in the Netherlands near Amsterdam. I was named after my both grandma´s: Bertha, but Bettina was much nicer my mother luckily thought ... and Sofie ... written on my birth certificate as Sophia what does sound a lot nicer, so my mum thought. So that´s what the BS thing stands for ... in my case. Since 1995 I work as a truck driver and have had many jobs. The Grass was always greener somewhere else so I thought. In some cases it was, other cases ... don´t ask me about it. I think trucking whereever on this globe is a special branche. And a lot is wrong in this industry, we all know it. It is something special ... not good in many ways but it seems to be the way it is. So in the US you have good companies to work for who pay you every mile or hour you have worked. We Dutch drivers are always paid by the hour. To pay a company-driver on miles (kilometers) or even by freight or by weight of freight is illegal in The Netherlands. Or what you'll have is bad employers who don´t pay all the work you did for them. The trucking industry always is in bad weather by the way. So there is no money to pay the drivers what they should earn. So we are paid about 20% less than we should earn, at least that is what the union says. They compared truck drivers with other jobs and bus (people-freight) drivers who seem to earn more an hour than we do. The big problem is that Europe has grown ...and other countries came into the EU. Such as Poland, Tjechie, Bulgarije, Letland (former part of Russia) and so on. In those countries people earn a lot less than in Western Europe. They can haul freight for a lot less money than can we. So a lot of Western Companies now hire ex-Eastern European drivers to drive their trucks around Europe. You see also more and more trucks from these countries driving around in Europe, and less Dutch and other Western Trucks! We are loosing our poll position in the transporting industry. Holland (Netherlands) is not anymore number 1 in European transport .. now Poland is. And they say WE Western European drivers are too expensive! Is about 10 to 11 Euro´s too expensive??? (before tax) I really do not think so. (that's $13.32 - $14.65 US dollars) And of course here the cost of living are more expensive than in the new EU countries. I do not have a crystal ball to see into the future .. but feel the future for a Western European International driver are BAD. That´s why last december 2008 I went national and haul car-fuels which is hazmat and more specialized. My job is not on the line ... and not that easy ... But if you drive internationally .. the chance is rather big you will loose your job to an Eastern European driver because they cost less.

It´s all about money. Greetings from Holland, Angelique

I Want Out Of Trucking As A Driver

Truck driving is not an easy career, and I got into it because I needed to make a better living. Now it's gotten old, and I'm looking for a way out.

My 33rd Anniversary In Transportation

After 33 years as a woman in the transportation industry it's been amazing to look back at the journey and how far women truck drivers have come.

Truck drivers in Europe now must pay to have additional schooling in order to maintain their status as truck drivers. Will this be coming to the U.S.?

Working My Way Back Into The Trucking Industry

I got out of the trucking industry back in 2009. Almost two years later I'm ready to get back in but I'm facing a few hurdles along the way.

Sleep apnea is a big topic in the trucking industry, but is it justified? Or is it a money-making scheme for the insurance companies and medical industry?

Why Drivers Are Paid By The Mile

Truck drivers are normally paid by the mile. How did it get this way, and would hourly pay be better? Here's the story, and some thoughts on the matter.