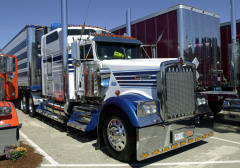 The beginning and the end of the second week truly made me question whether I wanted to be a truck driver. I left on Sunday evening to make a delivery in Greenville, South Carolina. I was driving on I-85 at 10pm, about 20 miles east of Carnesville, Georgia when I felt a huge BANG on the left side of my trailer. It was a surreal experience as I looked in my mirror to see an automobile falling away, at a 45 degree angle, into the distance as its headlights blinked away into lifelessness.

The thoughts that enter your mind during a time of shock are often ridiculous. When I lived in New York, I recall going into a skid in my Chevy Nova on an icy winter morning. As my car was sliding toward a log fence, I remember thinking, just before the moment of potential impact, "I wonder if my insurance covers this?"

After the car slammed into my trailer on I-85, I had two thoughts: the first was simply, "Holy Crap!" The second was, "Maybe no one noticed." I was so shaken up that nowhere on the side of the road looked like a safe place to stop, so I rolled into the next truck stop. When I got out to look at my trailer, I saw that the landing gear was bent, a mud flap was torn off, the landing gear crank handle was bent, and there were a couple of pieces of the car that had hit me lodged in the trailer—yes, someone would notice!

I knew I had to call the authorities, but first, I walked into the truck stop in an effort to calm myself to the point where I'd stop shaking. I should have stopped immediately as soon as the accident happened, but I was in such a state of disarray that I had made a poor decision. I finally calmed myself and resolved to do the right thing. I went back to the truck and called the police and the company home office. After waiting for over an hour for two officers to arrive, they eventually instructed me to return to the scene of the accident.

When I arrived back at the scene, no one was there. I wondered whether I was in the right place until I saw some broken glass alongside the road. I called the police again and finally got in contact with the investigating officer. He told me that the investigation was over, and he didn't need to see me unless I wanted to see him. I politely informed him that I did not. The home office seemed satisfied when I relayed this to them, and I never heard anything more of the matter.

I learned two things from this misadventure: first, that being safe out here requires being careful and being lucky and, second, that I needed to keep my head screwed on straight in a time of crisis. I had made the wrong initial decision, but I had gotten lucky—next time, I might not.

Even though there was nothing I could have done to prevent what happened, I hoped that no one was injured. I never found out what happened behind me to cause the accident because the officer didn't tell me, and I didn't want to risk getting his dander up by asking pesky questions. I returned to the truck stop and removed the two pieces of red fiberglass from my trailer. I didn't know what kind of car had struck me; the only thing I knew for certain was… it was red.

After saying goodbye to my trainer, it was time to set out on my first solo run as a truck driver, and what a humbling adventure it turned out to be!

Truck drivers have tough days, and oftentimes tough weeks - especially that first year. This was yet another tough lesson learned early in my career.