Getting Exercise As A Truck Driver

What New Truck Drivers Need To Know About Exercising And Staying Fit On The Road:

The benefits of regular exercise are nearly endless. Getting exercise and getting or staying fit helps both your mind and body, and will allow you to perform your duties at a much higher level.

Truck drivers are obviously more susceptible to weight problems and other health issues that result from a lifestyle that requires sitting in one place for extended periods of time. You should always couple your exercise routine with a proper diet.

Regular exercise helps combat weight control and certain conditions and diseases like heart disease, high blood pressure, and "bad" cholesterol. Studies show that the risk of "all-cause" death is 30% lower in adults who perform at least some regular, physical activity.

Any vigorous physical activity is beneficial to your longevity, both as a driver and as a human being. Generally, if it raises your heart rate and makes you sweat, it's exercise. As always, check with your doctor before starting any type of fitness program.

Generally, for the average over-the-road (OTR) driver, you will be better off coming up with ways to get exercise on your own, rather than try to find a gym or fitness center.

Probably the easiest and simplest type of exercise that you can engage in on the road. You got two legs? Use them.

Fun Fact: Walking Around Your Truck 32 Times Equals About 1 Mile 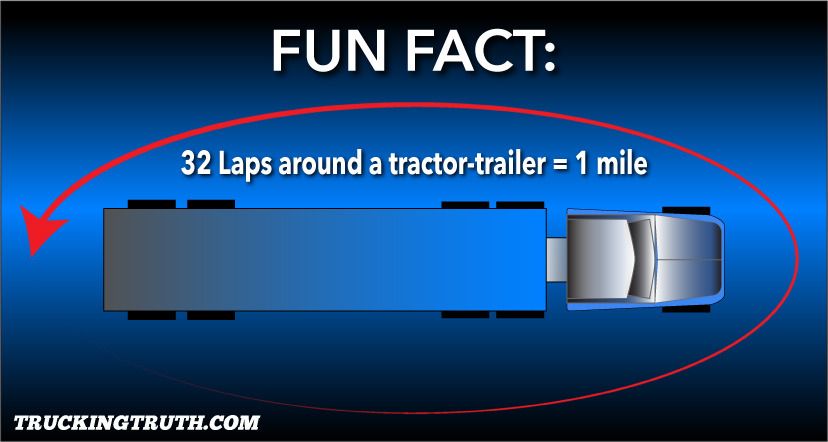 The Health Benefits Of Walking:

Besides walking (or running) laps around your truck, the sheer size of many truck stop and terminal facilities gives you plenty of room to get a long walk in, without having to leave the premises.

If you are walking/running/exploring unfamiliar areas, as always, use regular caution and common sense. Try to stay in well-lit, and well-marked paths, keep your head on a swivel, etc. At this point, a good majority of drivers will be carrying a phone with a GPS built in, so finding your way has never been easier.

Bodyweight Training & Other Exercise Outside Of The Truck:

For those interested in more of a strength-training approach to fitness, the tried-and-true method of push-ups, pull-ups, squats, and lunges can be performed with enough variations and levels of difficulty that you will literally never run out of milestones to conquer.

There are many different programs and apps available for bodyweight training, and most exercises involve some form of pushing, pulling, or squatting, most of which can be adapted to whatever equipment is available. Namely your truck and the area surrounding it.

Working out as a truck driver on the road doesn't need to be expensive. The Healthy Trucker brings you a set of exercises we've specifically designed for truck drivers using minimal equipment. The movements are tailored for truck drivers and target multiple muscle groups at once for efficiency, so you don't have to spend as much time working out.

Bringing Bicycles On The Roa:

There are also many drivers who bring a bicycle along with them on the road, either a full sized version that they carry strapped to the back of the truck: 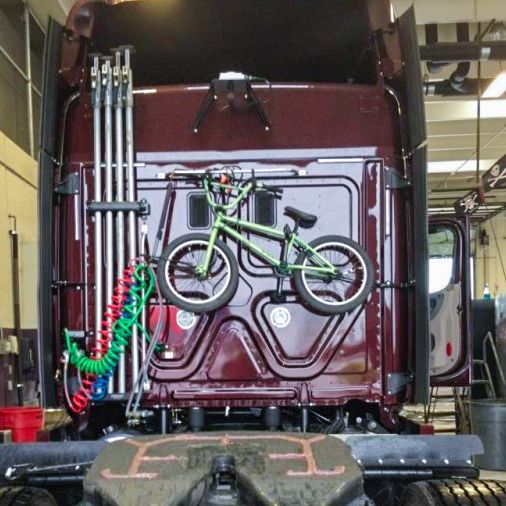 Or a fold-up bicycle, which can be folded and stored inside the truck itself:

Folding Bikes for Your Truck

An ambitious driver will be able to find a spot to ride anywhere they travel. Many truck stops will be located in the vicinity of a designated bike path, or at least an area where you can ride safely. If there is enough room in the cab, you could even get an inexpensive bicycle trainer stand and ride inside the truck:

Obviously, the small dimensions of the typical cab limit what kinds of things you can take on the road. There are some smaller items that will help you get exercise in the event that you can't, or don't want to, leave the comfort of your truck.

How To: 8 Basic Kettlebell Exercises | Kettlebell Workout for Truck Drivers

In reality, the schedule of a truck driver is so busy and erratic that finding and using a gym, especially in the first year when most of your time will be spent driving or sleeping, is usually not really feasible for the average OTR driver.

There is really no end to the benefits of regular physical exercise, for both your mind and body. Increased energy, reduced risk for disease, better mental function and mood, and weight loss are just a few of the major benefits of physical activity.

New studies also show, for those who just cannot get regular exercise Monday through Friday, that people who only exercised on weekends, but still managed to get the 150 minutes of moderate exercise, or 75 minutes of vigorous exercise recommended by the World Health Organization (WHO), reduced their risk of early death by 30%

How Does Exercise Affect The Mind & Body?:

The Top 10 Benefits of Regular Exercise