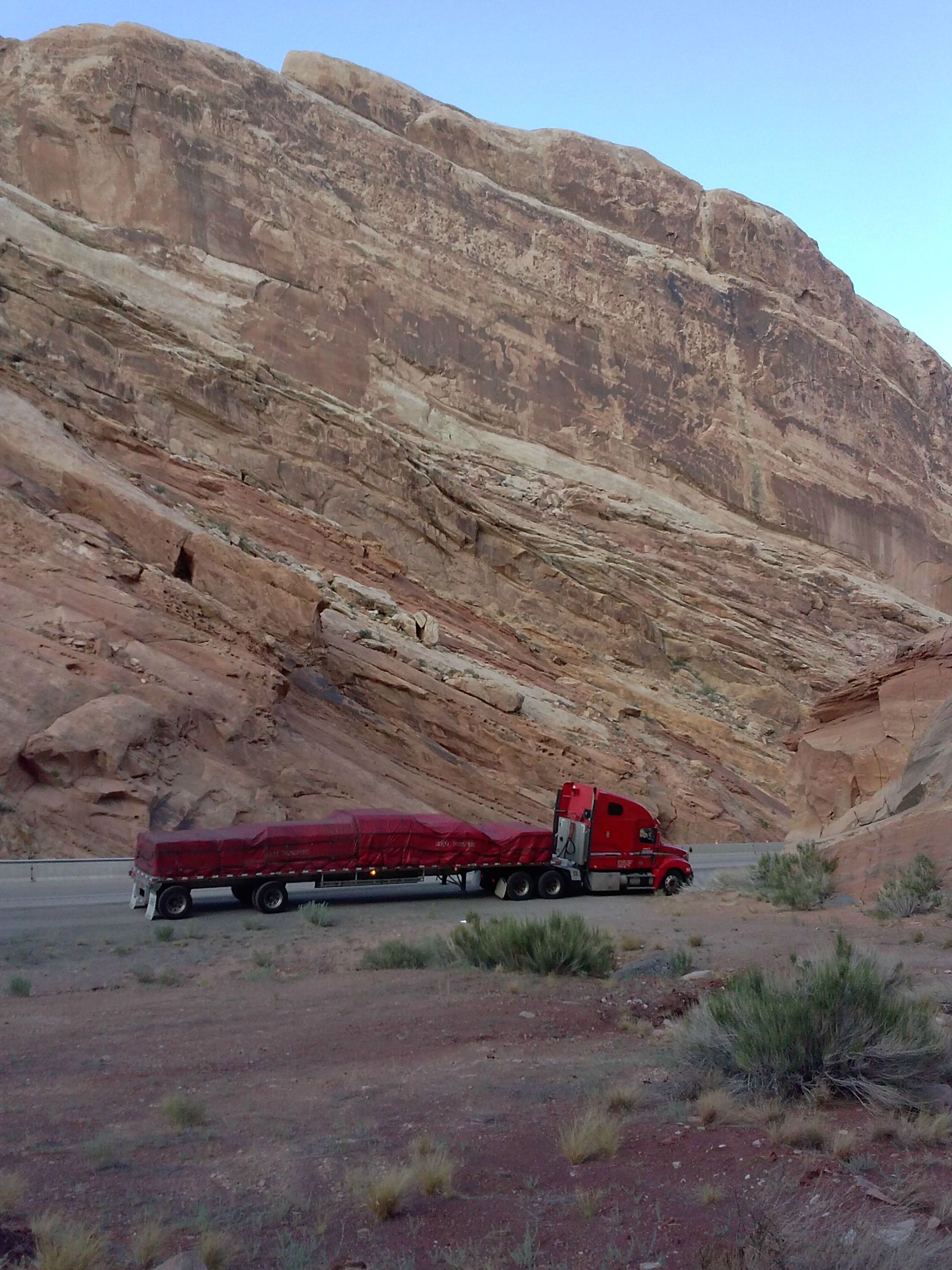 Currently not driving but considering getting back into it. This forum seems significantly friendlier and more welcoming than other forums.

Outside of the truck, I'm into music production, playing musical instruments, writing, programming and computers & technology, and I'm very much into boxing and stand up comedy. I also love dogs and I think it'd be cool to have one in a truck with me.

I am in orientation. I went through the hassle of yet another physical, despite already having a two year clearance. Drug test(s) all of that. All of the hours sitting in the classroom listening to the presenters talk.

I was supposed to head out with a trainer today. However, evidently, during the hair follicle test, not enough hair was collected from me, and the lab sent back something saying we needed to do it again. "This have never happened before" Gee, lucky me.. The thing of it is, I was told we'd have the results "hopefully by Tuesday".

I was hoping they'd let me stay in the hotel. This was not the case. I had to take the train back home (I live over an hour away) and then a bus. Then a second bus. The second bus was on a detour so I walked an extra mile or two past the detour's end to catch my second bus, carrying all this luggage.

I am beyond frustrated.. My financial situation is dire, to say the least and this setback to "hopefully Tuesday" I absolutely cannot afford. I was debating between two carriers.. I even considered saying screw it and calling the other carrier and starting orientationf or them Monday, but the last thing I want to do is go through all of the headaches of peeing in a cup and shaving off my hair for someone and doing all of the paperwork all over again. I guess things like this are, unfortunately, to be expefted in this industry.

Getting back in the truck!

After quite the hiatus, I'm getting back into truck driving and I'm pretty excited. Tomorrow is my third day of orientation and I should be out after that. So far everything has been great and everyone has been very friendly and helpful. Staying in a nice hotel room by myself isn't bad either. Looking forward to hitting the road and making some paychecks!

How do you keep cool without APU in places where you can't idle?

I may start doing western regional. I've heard California has some ridiculous idling laws. The carrier I'll be with does not have APUs. So how are drivers expected to stay cool in that case? Is there a trick I'm unaware of, or whenever you're in California do you have to just crack the window and tough it out?

I'm considering two carriers. I'd like your opinions on how they sound.

I definitely appreciate the feedback. You're correct about a lot of things. Both seem relatively similar in terms of hometime, benefits, etc.

I have mixed feelings about getting back over the road. Initially, it was just a means to improve income. My girlfriend had just moved out and I wasn't getting by making $10.50 an hour. However, as I was reading into it and reading forums and drivers' stories I got more interested in the job itself. During my OTR training, I loved all that I had learned, including driving a stick for the first time in my life. Learning all about the engine and its parts, not to mention it felt pretty bad ass getting in and out of a big rig. Having already lived in a vehicle and lived minimally, I didn't mind, and actually quite enjoyed sleeping in the sleeper at truck stops and seeing new places and new states every day. I came to enjoy the job. The worst part about it was internal ****. Anxiety was on a high level due to not being used to it. Downshifting to come off the highway, grinding gears, steep ass inclines, backing, BACKING, ugh.. All stuff I could get used to. I think I freaked myself out a little too much.

Anyhow, you're right in a sense that I was kind of looking at it as another option, but it's an option that I miss that's always lingering in the back of my mind. A huge part of me misses it quite a bit. The freedom of not having to deal with people all day, (I'm seriously incapable of working with customers and a ton of coworkers all day non-stop), having my own living space in the truck, the satisfaction when I do a good backing, or when I shift smoothly without grinding, lol. And making a decent living.. Most drivers consider $1000 a week to be **** pay, but I consider $600-$800 a week to be living WELL. It seems the worst part for most drivers is being away from family but I live 2,000 miles away from family and go a few years at a time without seeing them so that's nothing new.

The bus ride and the year contract were just two factors I was considering when making a decision. If I had to bus to Texas to get on with that carrier, it wouldn't be the end of the world but if I found another carrier that was comparable where that wasn't required, that's far more appealing. My apprehension regarding the one year contract, I am just wary of contracts in general. I've read too many horror stories on the forums how a carrier will treat you like crap, knowing they 'own' you with all that money hanging over your head. Just another thing that I was considering.

I mean, I don't intend on making it a 20+ year career, but I could definitely see myself doing it for a few years, set aside money and start my business (which a few other drivers kind of have the same thing in mind). Once I calmed down and got used to things I'm sure I'd enjoy it just fine. I have more good memories when I was over the road than bad, I'd say.

Anyhow thanks again for the reply! This one was a bit scattered I know, haha.

I'm considering two carriers. I'd like your opinions on how they sound.

I got my CDL last year (2013) but have been out of a truck for the majority of the time since, as I returned home after my OTR training to find a local job so I can finish my degree. That didn't pan out as expected so I've been looking at getting back in a truck. I've been looking at two companies. I've looked at KLLM/FFE which would be an LTL position out of my city and get home weekly. .35/mi, plus $30 a stop. 6 month contract. The only drawback is I'm really not too keen on taking another greyhound or flying to Texas to do the refresher there and stay in a dorm with a roommate again and spend 10 days not getting paid. I've heard mixed things about this company, as one would expect with any company I suppose.

A couple of questions about refresher courses and orientation.

Thanks old school! Western Express I've seen their ads all over Craigslist I'll have to give them a call. I'll also look into Central as well. Thanks for the tips and the welcome sir.

A couple of questions about refresher courses and orientation.

Thanks in advance for reading my post. I haven't driven since August and I'm looking to get back on the road. I applied with May Trucking and spoke with a recruiter, and was told I would need to take a refresher course. I absolutely do not have the money to go through a refresher at the moment..

My first question is: Do you know off-hand of any companies that will not require me to take a refresher course and just get back into training?

Also, do you know which companiees do their orientations out of Salt Lake City, or Utah in general? The only one I'm aware of is CR England and honestly I'd rather go work at Walmart than get mixed up with them. I'd rather not take yet another greyhound trip across the country if I don't have to.

Please keep in mind I have a clean driving record, no DUI, no criminal background, and relatively decent employment history.

Any insight is greatly appreciated. Thank you.

HELP ME OVER COME MY Disappointment

That sounds bizarre that Roehl won't take you out of Arizona, seeing as they have a terminal in Phoenix... But Knight could be great for you. They have a training facility in Phoenix too I believe, and that way you wouldn't have to take a long Greyhound ride across the country to get started up again. Good luck man.

Also, TMC is supposed to be good and I will tell you from first-hand experience Roehl would be a great option too. Good luck!

Whats a Rookie to bring

Hey Brett,could you make a detailed list of what us rookies are to bring ,say our first five weeks OTR ing.That would be great you know with a trainer,shower caddy flip flops for shower right down to clothing?technology what we need for that type stuff all the goodys

I don't know if it's been recommended already, but crocs make excellent shower shoes OTR. With a towel they dry off very easily. It's a great investment for a few bucks.

I got started with Prime last year. I went through their orientation and did some of their PSD program, and decided to go home and go to a local CDL school. You're welcome to ask any questions you may have and I'll help with what I can.