Taken from another site..

"In areas where there are anti-idling laws, CPAP use in all weather conditions would not be possible if an APU or IdleAire was not available. However: the exact language of anti-idling laws varies from location to location. Some have language that would allow idling for powering a CPAP and some do not. Sleep Apnea is a "disability" as defined in the Americans with Disabilities Act (ADA). The ADA requires "reasonable accommodations" for persons with disabilities."

Yeah, My issue isn't with the Sleep Study or having to use the machine. It's that the information isn't readily available.

(RANT) Honestly, the average person doesn't know it's an issue (in the CDL world) until it's mentioned, or they happen to stumble into a thread that say's it could be. There are literally hundreds of obvious questions to be asked by a person who's wanting to enter this field, but how many think to ask about their BMI being an issue? Why would they? There's so much to take in and so much excitement of a new career to be had, The last thing on one's mind is...Yup, one's BMI. It's all about $$$, miles, which company to go with, Apu's, bonuses, benefits etc... Seriously, you'd think it would be listed somewhere, like maybe under the minimal qualifications section of their website. That way people wouldn't get caught off guard during the process of qualifying for a truck driving job. I dunno... (END RANT) Please don't think I'm dogging the industry. I'm just pointing out something that I feel could be handled better.

I've done lots of reading on the subject before going to the TDS this past Monday, because I did stumbled onto a thread about it. I have yet to read anything stating it was a deal breaker at any of the companies I'm looking at. In fact, what I read was, a number of stories of people who were at School, and that's where they were hit with the BMI factor. Yup, most had no idea it was coming.

So, at that potentially humiliating point in their lives,

due to their BMI, the School would send them to have the sleep study done, after which they're told they need to buy a machine for the low low price of...$$$ As mentioned above, I have read where the Company would pay for the test and front you the $ for the machine, then deduct a fee weekly from your check till it was paid for. So, there is that option, with some companies.

So why is it potentially humiliating? Well, for one, You're in a room with a bunch of strangers and you're informed that you need a sleep study because of your BMI. Not quite the best of situations... Why is that a problem? Well, Sleep Apnea is often looked upon as being a preventable Disability that affects Fat people. When in fact, it affects thin people too. And yes, it's considered a disability.

My Long azz point is... Maybe some of this could be avoided (in a perfect world) if, potential CDL applicants knew of the BMI guidelines before hand. That way they'd at least have options.

I'm a little confused. Recently there have been people on this site that are overweight and have passed their physical without a sleep test, also I have read posts that said that some companies will do a sleep test and pay for it if you go through their school.

That's where I was coming from. I thought if the company wanted me to take the test, due to my BMI, they'd cover the test and I'd be responsible for paying for the machine.

Headed to Prime at the end of the month!

Welcome, and Best of Luck to ya!!!

Here's the thing... There was a question on the application at the School asking if I ever had sleep apnea. I marked YES. The recruiter at the truck driving School informed me that I'd need to have a sleep study done, at my expense, before they'd allow me into their School. Anyone else have this happen?

I've read and read lots of stuff prior to my visit to their School and hadn't come across this. 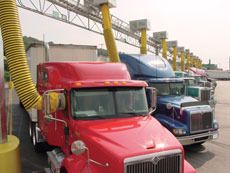 Yeah I hear you Brett. I guess my concern was/is I live in Florida, the land of Wake-n-Bake, and didn't want to melt.

Btw, does anyone know what those things are at rest stops on I-4, that the semi-trucks park next to? They look like a 4' box with what looked like a 4' long hose with a 4" diameter . I figured the hose was too big in diameter for it to be a vacuum of sort.

When we left my wife asked me what I thought they were and honestly, I noticed them but didn't give them much thought.

Ready for orientation at US Xpress!!

Congrats Travis and best of luck to ya!!!

Both. Some prefer you to have a partner, but from what I've read, they'll almost all pair you up if ya don't. Most, if not all have a system (a form w/a few basic questions ,) in place to 'match' you up with some people. Then you can contact them via phone, email etc and chit chat.

Or maybe you'll meet someone at School who's looking to go Teams just like you, and viola, you have a partner.

Funny, I was told at a trucking Co. not to apply anymore. That I should let them do it.

Keep this in mind when you're talking to your recruiter, about team driving...

I asked recruiters a lot of questions at this one company:

For this Company: 1st) Normally a team runs about 17+ days before getting a few days off. This is a fine and dandy if y'all live close to one another.

BUT, If you and your teammate live in different States or live too far apart, you'll be required to rotate home time. In other words, y'all will be on a 34+ day rotation before YOU or your teammate get to go home.

2nd) If your teammate wants to go on vacation but you don't, you'll need to get a hotel rm. close to his/her house (at the company's expense,) and wait till they're ready to go back on the road. Then keep in mind...Who'll be the one driving when it's time to go back to work.

Again, you're only getting paid as a team driver, which is at the split rate. And you're only getting 1/2 the miles cuz they're sick and not driving. Now at some point, the company would have someone grab your load and take it the rest of the way if need be, to make a deadline. But now what do you do?

REMEMBER, not ALL companies may be this way... But now you know that there's at least one that is. Obviously, if you're married or otherwise related to your teammate, there probably won't be an issue. Also, some of these issues can be prevented by living close to your teammate, but apparently that's not always the case.

My take on it:

Private School: The letters let you know that in fact, there is a job or are jobs available for you once you're finished, with School & Training. Although, They're not a guarantee that you will be hired by them. Cuz: You have to pass EVERYTHING, (IE.) all Background checks, Physicals, Tests, Training etc... And still, it's Not a Guarantee. Although they'll more than likely hire you.

Company Paid Training/School: Guarantee you a job at their Co. once you've passed everything. So there's no need for pre-hire letters.

SO they are removing the APUs and replacing them with a system where the engine stays off? How could you run an inverter if they do this without draining the battery?

I spoke with the recruiter again.

I asked if the system would start the truck, with regards to the comfort levels w/in the cab? The recruiter said it'll kick on at a certain temp.

When I asked what that temp might be? The recruiter didn't know off the top of his/her head but, said it wouldn't allow you to Freeze or Roast.

I just asked a recruiter about APU'S in their trucks and was told that they're doing away with them. The recruiter stated that they're too costly. Say's they're going to an Optimized Idling system that'll automatically start the truck when needed. What I failed to ask was, if the driver's comfort level fell into the "when needed" category.

One of the many tings I like about WERNER...

Welcome to Werner Enterprises. One of the many benefits you will enjoy as a professional driver includes tuition reimbursement. Our general guidelines are listed below.

There is a $7,500 limit on Tuition Reimbursement."

Got my 1st prehire letter... Hope I didn't just blow it!

Btw, She sent an email answering all of my questions.

Maybe someone from Florida will have to answer this?? I dunno.

When you go out of Florida for School, what's the process for obtaining a CDL. Does the Company (School) Transfer or help to transfer your License to their State in order to get your CDL in that State? Are there tests one has to take in order to get an out of State Class E license?

When I get back home (FL,) what's the process for getting my license (Class E) and my class-A Cdl switched to Florida? Will I have to test for either, the Class-E or A-Cdl?