Started with Swift as OTR. It's a fine company. Drove a yard goat at a distribution center for them for a few months too. Now I drive local food grade tanker for a different company. 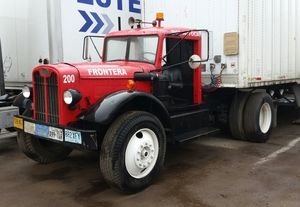 Kudos to you for taking the load. That would be a terrible reason to turn down a load. Also, remember to keep your window down while backing.

Me too. Excellent staff and fine program. Try talking directly to a Swift recruiter if you're interested in learning more.

Survey: Your biggest worries and most important questions

When I came here my biggest questions were,

1. Will it pay enough, soon enough to meet my budget requirements?

2. If I arrive at school with my head on straight is it going to be possible for me?

3. If I'm successful, what opportunities become available to me later?

Of course, I know the answers now but those were my main concerns.

My employer hires out of schools sometimes. We are Northwest only and it's local work. Not sure where you are.

Searching for the mystery company

...college reimbursement that "benefit" the company. What would that be, and that is an honest question?

For example, if an employee was interested in taking some management or leadership courses a company might offer tuition reimbursement to offset the cost. The gain for the company is that the employee could be a potential candidate for promotion.

On an interstate in an urban area, if you're passing through and not exiting, stay out of the right lane. Leave that for the commuters that are entering and exiting.

3 pound hammer. No carpenter hammer, but a pry bar that can pull nails from the trailer floor. 2 pair of Visegrips. These should open wide enough for the trailer tandem pins. Bolt cutters with at least a 24" handle. A push broom. There's a thread on here somewhere that has a very comprehensive list.

Can I be held personally liable?

If the cruise isn't turning off when it's supposed to that a pretty big deal. I can overlook a lot of things but I need the tractor to stop when I tell it to. I wouldn't use cruise control until it's fixed. Hmmm, I've heard that posting pictures here is tricky. I haven't tried it in a very long time. Turns out when I followed the instructions it worked on the first try. Go figure.

Advice please - started solo and second time this is happening.

JJ, It sounds to me like most of your concern is related to driving without proper rest. When you're OTR you can never have what civilians call "proper rest". When you have to shift from day driving to night driving as the loads vary, don't be afraid to take an extra short break. Pulling off to catch a 20 minute nap sometimes does wonders to refresh you. You won't be earning during that time but you won't be driving off the road either. After a couple months you'll get used to it and it won't bother you. When I had to drive an "off" shift I would wake, shower, and have a small coffee with some honey in it. That's as close as I get to an energy drink. Be patient and stay safe.

Maybe dump truck or cement truck. You'll have long hours during the construction season but might be laid off in winter. With your lower income needs, it might fit.

I should add that there's a lot of close quarter maneuvering involved so it really isn't the greatest for new drivers.

Maybe dump truck or cement truck. You'll have long hours during the construction season but might be laid off in winter. With your lower income needs, it might fit.

I did several loads there when I was with Swift. We used the Walmart multi zone reefers. Follow their policies for multiple stop loads. The had a veteran walk me through the process, it was pretty straightforward. Fuel, park and shower at the Swift building in Los Lunas. I was running to El Paso every trip but I think they serve a big area. Maybe Gladhand did the same gig I think.

The photo and opportunity that took almost 7 years to achieve!

Congrats and nice pic. Where are you though? I didn't think that was legal in California.

If you're at the T/A on I5 I could swing by and say hi for a few minutes. I pass there frequently.

I did a favor for a planner, 4 miles from terminal to customer and try to deliver a late load. The customer rejected it any forced a reschedule. The planner knew I tried and hooked me up with about a week of work that sent me away from California and ended with me picking up a brand new trailer from the factory.

Another load was 70 miles of dead-head to pick up a load at the terminal and deliver it 11 miles away. I dropped the trailer and bobtailed back. When I finished I went in to talk to the planner, I was trying to get Northwest for home time. He said there were about 20 drivers waiting for loads but since I was the one that had just done the short haul, I got the west bound load that was sitting in the yard. I was only there long enough for a shower and those terminal rats are probably still griping about no freight!

All pretty good guesses, for those who suggested that it was riding to low they are correct I noticed on my walk around that it was really low on the right side. Normally I can fit my whole fist vertically between the tire and the box, on this one I could barely fit a finger.

Why was the trailer frame cut? That part above the tire isn't optional. That entire piece and all the rivets are important. It needs to be intact, not carved up with a smoke wrench. Although they did do a nice job of it.

All of our 28 ft pups come from the factory like that.

Well, I guess I learned something today, Thank You.

Some other details of local milk hauling;

We are required to chain up when necessary. Parking and waiting out the weather isn't an option. My company pays hourly though so that takes some sting out of it.

We use different log book rules than when I was OTR. The 11, 14 and 70 clocks are the same but we use the local option that lets us do 12 hours with no 30 minute break and up to one 16 hour shift per week. It took me awhile to get used to it but since most days are the same it doesn't take a lot of study.

A typical week for me is five days starting at 0300 and returning to the yard about 1430. Then three days off. Lather, rinse and repeat. Last year's gross pay was about $60k.

I can add my two cents about the milk hauling. What I do is almost entirely farm pick up of raw milk.

Our trucks are purpose built for this. We have a power-take-off pump and a 30' hose for loading. The trailers are doubles and are built to comply with the bridge laws and carry the maximum legal weight, 105,500 lbs. There is no adjusting of fifth wheels or axles, just fill the front trailer and put 28,500 or so in the rear trailer. There are charts and gauges at every farm to show us how much weight we are picking up. It is possible to overload the rear trailer. The milk can't simply be put back in the farm tank either. It has to be pumped into another trailer. This would take hours to arrange and might have the driver looking for a job at the end of it. I did some math wrong and put an extra 8000 lbs on once. I dodged the scales, made the delivery and apologized/explained myself to my boss before he heard about it from anyone else.

At the farm, the driver is responsible for several things that are minor but closely monitored by the state agricultural inspectors; nothing that can't be learned in a week of training. We have to pick up at the farm within a narrow time frame. The milk tanks have to be washed (usually daily) and that means they need to be emptied. Since they can't turn off the cow, we have to empty the storage tank to make room. Because we have double trailers, we can do a u-turn in a very small space, less than our overall length (about 80'). The farmers know this and expect us to pretty much do it the same way every time. It was a strange feeling the first time I looked out the passenger window at my own tail lights. However, that's the only way it can be done; as long as I'm not making any new ruts in the mud I'm fine.

At the creameries it's a similar situation. Each is unique as to their own procedures but those procedures rarely change. So what I did last year at Creamery X is the same thing I'll do next week and next year at Creamery X. Just as at the farm, there is a narrow time frame for delivery. Most plants will have us unloaded within an hour. If we are washing the tanks that's another hour.

With two trailers, the surge isn't as bad as a long single trailer. When loaded to 105,000 lbs the front trailer is full (no surge) and the rear trailer is about 2/3 full. So while it is sloshing around, the full front trailer dampens the effect quite a bit.

Something I haven't seen mentioned is transmissions. We have mostly 10 speeds. I think that because of the surge we could never have automatics as they would be constantly shifting back and forth. I'm not sure about this though. Does anyone with a smooth bore tank have an automatic? I know that baffled fuel tankers can use automatics.

Why was the trailer frame cut? That part above the tire isn't optional. That entire piece and all the rivets are important. It needs to be intact, not carved up with a smoke wrench. Although they did do a nice job of it.