No healthy boost when it comes to energy drinks. I do love me some Red Bull though.

At a previous company I worked at, the reefers had presets that they would like them to be set on per instructions on the shipper or receiver side. Do the reefers have that, or do you just set the temperature?

They may have it, I'm not sure. I just used my knowledge from previous reefer experience with Walmart to precool the trailer. They ended up wanting the trailer at 34 so I was good.

Got up bright and early, did the usual morning stuff, pre trip, and then hit the road. Good wide open day of driving interstate roads. Hit some snow, but it wasn't sticking. DM called to let me know the reroute was a good idea, another driver took Swift's route and ended up shutting down.

Basic day of driving really, made it to Loves in Pueblo, Colorado to take my break. Got called by my dm informing me of my next load going to San Jose, California. Going to sleep at the final on Friday that way I will have just about a full clock when I go to pick up the load going to San Jose and at least make it to Evanston, WY by the end of that shift.

First day went alright. Had to deliver a second part of a load to Shamrock Foods up the road. Took 2 hrs for them to unload me. Wasted another do hours dealing with claims because there was damaged freight from a prior stop that was not reported to claims. Wasted time just to be told to throw it.

After that I made my way back down the road to get a washout. Knew I was picking up dairy from shamrocks farms so I set the reefer to 32 just like Walmart has it, so I could precool the trailer. Got to Shamrock farms and was loaded within a hr.

Had to go back down the to weigh it at the busy loves in Tolleson, thankfully it was legal.

I was routed to go up to Grand Junction and then take 70 to Denver, but seeing the possibility for snow, I got re routed through New Mexico up i25.

Finished my first day with making it to the TA in Holbrook, AZ.

It's a beauty! What are the features in this state of the art Truck?

Well a few things. Swift upped the inverter so we can run a microwave, also it comes with a fridge, TV mount, and an added plus that the front chair swivels so you can sit in it and watch TV or whatever. Truck has an isx15 Cummins engine I believe. Awesome sounding engine. Truck has 12 miles so I'm the first to basically sleep in it and to take it on a decent sized run. Will see how it does.

I love the new blue, noticed they are also getting gray trucks that actually say Swift Refrigerated. First good size load is 795 miles, will do my best to document this experience to help others.

I am a total rookie with reefer in terms of picking up and delivering the otr way and not the Walmart way. Looking forward to the experience. Gonna look like a total rookie as I get used to driving the international.

Got my new girl. Ready to take her on the road. Covering a local load and then going to Denver. Hoping the unload and load don't take too long. We will see. 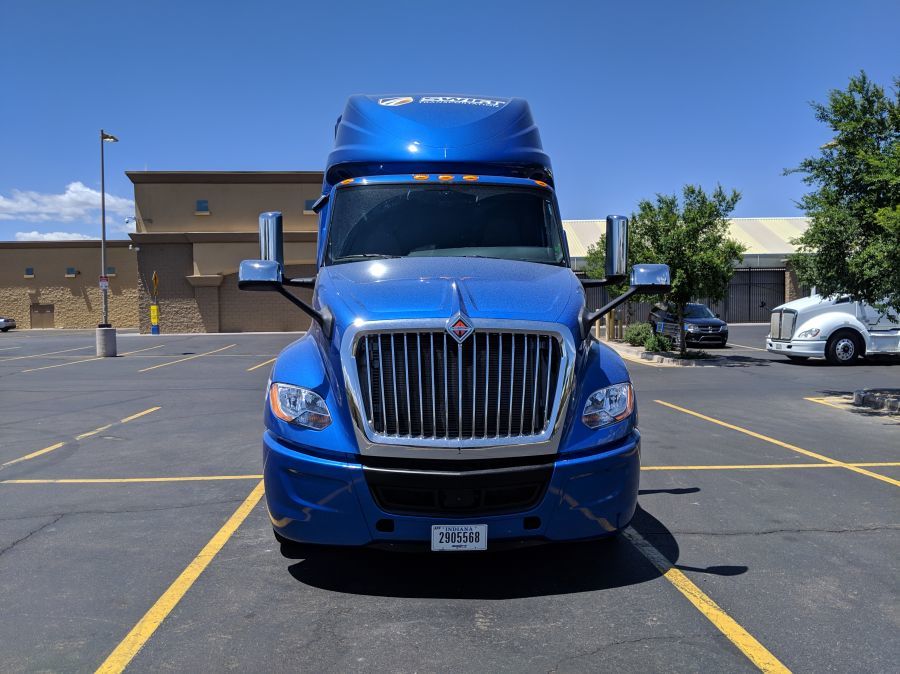 Awesome man, me personally, I like hunting down my 70 and bleeding it out, and eventually having to reset. I'll see how things go this coming week if I can do that.

The single-bunk one I had once had plenty of cabinet storage. Do you know what type you’ll be getting?

Double Bunk, I am assuming anyways, top bunk is for storage, no way to get me to train haha.

Flying into Phoenix tomorrow to pick up a 2020 International LT. Been wanting to drive one of those trucks and got one. Used to Freightliner so I know it will take a little bit to get used to the buttons and what not. Hopefully Ill have a load sometime tomorrow and be cruising down the road with a reefer on my back.

Depending on how far back the company requires a DUI, you will more than likely need to let them know about it. Better to say that you did, than say that you didnt. Even if it was 15 years ago.

Gladhand... I've always been under the assumption that refrigerated drivers sit a lot... Any chance you would keep a weekly/biweekly log and see rather that holds true in comparison to dry van?

Again I don't know that it's just what I had assumed.

Will do, I think there may be advantage to running reefer freight due to less reefer drivers at Swift. Doing dry van at Swift you can hit good miles, just wanting to see how reefer will be. Will keep yall updated.

Just a quick number crunch using my ranking numbers comes out to an average of 579 and change. My year miles on the portal right now are 144,378 on 249 dispatched loads. It's a little misleading because it includes a lot of 1 to 50 mile runs I've done to help out.

Thanks for that Big T, now I just gotta wait these few days out. Hope i am in a truck and running by Tuesday. We will see.

I'll look through my book and get you an actual answer, but yes they tend to be longer than dry van.

It cracks me up sometimes when I go to a dry terminal and they have the "no deadhead" signs because on reefer I've deadheaded 500 miles to pick up a meat load.

Appreciate it. Really hoping I have a good experience on the cold box side.

Hey Big T, was wondering the average length of haul you see on reefer. Rochelle's terminal leader told me they tend to be a bit longer. I am sure there are short loads too. Hoping refrigerated ends up being something that works well for me.

Congratulations on the new gig. Refer is different to say the least.

I like it better than doing dry van. But the waiting with refer to get loaded or unloaded can also be a pain.

Definitely not looking forward to the unload/load times. Are the lengths of haul fairly long? It is the main reason why I wanted to do reefer. Its nice to drive a little more and be at customers less. Hopefully I will run into you somewhere on the road (figuratively speaking).

Hey time does fly! I might be passing you, if I can get empty here in Phoenix.

Not necessarily exciting for some but I want to catch the Rockies in Denver at coors field and go to Suntrust Park in Atlanta. It is a bucket list of mine to visit every MLB ballpark.

Editor's Note: We have an excellent review of Swift's Paid CDL Training Program so check that out.

I'm going to be hauling a reefer for Swift Refrigerated and I'll share my experiences here.

Went back to Walmart dedicated after the situation with my brother. Now that things have settled I am headed back to the road. Thought this time around I would try hauling different freight to get a new experience on the road. Will be out of the Rochelle, IL terminal. They are getting a new dm so they aren't going to start me until Monday. Assuming Ill run a dry load out of Albuquerque to a place where I can get a reefer.

Crazy to think I hit 3 years of driving a few weeks back. Time really flies. Hoping to stay out this time and do some things that I have been wanting to do this summer. Be safe everyone!

I see them all the time parked for the night. They are the loudest group against e logs.

Ok, I guess I just haven't run across any. I thought it might be that it was a noise issue with cattle bellowing all night. But as you point out, there is a noise issue: against e logs. Lol

You couldn't leave cattle in the trailer like that over night. Big reason why they don't have to take a 30 minute break and also why they tend to drive faster. All about getting that cattle out of the trailer asap.

Doesn't it have a button in the cab? Our 2018 Kenworth daycab has one. It's under a red cover button that you lift up, then there is a little lever you lift up. Releases it Everytime, noticed it was tough to pull when doing it manually.

Which brings up a question. A few times my release handle won’t pull out. I have to get back in the truck and do the back and forth thing until it frees up. Why does that happen?

Pressure on the fifth wheel. Got to back into it to relieve the pressure.

Driving Jobs other than OTR

It's possible, best bet to avoid really tough situations would be regional work getting you home weekly. All I got to say is avoid dollar store accounts. If there is a will there is a way.

If you can backup to anything and everything ect.. go for it.. seem most ward away from local stuff because newbies suck at backing up... im in school and got bored... i made myself an old serpentine back test using 8 cones instead of 3... like i said i was bored lol

Backing is easy when it's cones. Wait till you got to blindside back into a business on a busy street with cars on both side of the road. Don't get too overconfident that will lead to accidents.