Profile For Kip Brown (aka Six) 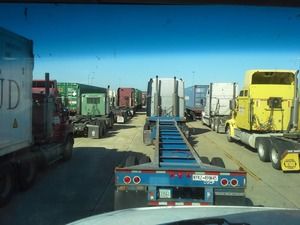 Comments By Kip Brown (aka Six)

USXpress and Werner only do **** test.

Time to get rolling..

Well I'm on my way back to Werner to try out some team driving. They have a $7500 bonus for teams that you split. Extra money never hurts. Not sure when I'll be back on here but everyone stay safe out there!

So I was given a driver portal log in from Werner to read through pre-orientation information, forms to fill out, benefits, etc. Also gives you the company polices, handbook, etc.

They have a list of immediate terminable offenses and one was a NO U turn policy? Can someone give me some insight on this? I don't recall reading anything that says its illegal for 18 wheelers to make this maneuver unless there is signage stating it.

Is this just considered a dangerous/ safety issue? I know you can't just whip a u turn anywhere.

I drive for Werner and it's true. If you get caught doing a U-turn you're done. They are pretty strict with safety. You also can't park on the side of the road or anywhere besides a truck stop, rest area, or terminal. Makes it a pain when you're running out of time on the clock and you can't find a spot to park..

Normally yes. But in Illinois you can't transfer you have to re-take all tests.

Is it true that if I go to an out of state school for Company Sponsored training that I can't transfer the permit over all because I live in Illinois.

I have my CDL in Ohio but live in Chicago now. Most states you can transfer but Illinois you have to re-take everything, written test, maneuvers, and driving test. You know Illinois, I'm sure it's about money.

Welcome back... BTW someone stole the deck off your trailer....

Maybe you already caught it on your post trip...

Maybe it's late but you lost me.. lol

Not even good enough to be the gum on your boots

A lot of it is nerves too. If you learn to relax it will come to you. It will eventually just click and you'll be fine. Soon you'll be thinking this shifting stuff is easy and fun. 6th gear is always you save your ass gear.

Got my CDL A, Now where?

I know what happens in most cases like this. If your trainer needs to drop you off for any reason they usually route you to a terminal and put you up in a hotel until a new trainer is available, which should take a week or less. That just doesn't sound right that they would send you home and not get you right on another truck ASAP.

That is the same place. You can only go in the one way, and they don't want you to u-turn. I actually saw a cop come in and catch a guy that had turned left in there while I was waiting to bobtail out. It's over by the Home Depot distribution center. The GPS had me out in the middle of nowhere, saying the empty field was my destination. And, it's a long walk to get the restroom key and back if you need it lol.

I run over to that area quite a bit sometimes.

Union Pacific Global 4.. yeah only one way in and I came from the other direction.. you can't turn around anywhere. It's by BNSF Logistics..

Great examples. I like to stick to a routine and never deviate from it. The easiest way to make mistakes is when you're in a hurry or to tired. I always double check everything with a walk around once I'm ready to roll.

Nice to see you post Kip! I've just started posting again recently. Can't believe it's only been a year since we started. Feels like much longer lol.

It sure does feel longer. I'm sure this winter will feel a lot longer..

I know a pre hire isn't a guarantee and I read the article on here stating that, do they do a second interview when your at orientation and then make a decision like most other jobs or is it really an actual orientation and they then verify everything I have told them when I applied? I was fully truthful on the applications and my background check should be fully clear. Thanks!

You will get the pre-hire job as long as you pass their drug screen, physical, and background check. I had my DOT card and drug screen and all but a lot of companies make you take it over when you get to orientation. They just can't guarantee anything until all that is cleared.

It was Union Pacific in Joliet, IL off of 55. I passed it once and you could only turn right into the terminal. There was nowhere to turn around so I had to get back on 55N and turn around at the next exit and head back. Once you find it once it's okay but the first time was a real pain.

I haven't been here in a long time. It's been a rough and exciting time. I ended up driving for a time with US Xpress on the Dollar General account but hated it. I got a better deal and route from Werner and loving it. It took some time getting used to the new lifestyle but once you taste it, it's addictive. When I'm home for a few days I get anxious to get rolling again. I was unfortunately suspended from Werner pending a court case from my divorce. During that "break" I drove for a small company in the Chicago land area. I drove day cab and containers from Union Pacific terminal in Joliet, IL to Indianapolis. They then started routing me into downtown Chicago, which sucked big time. Now I'm back in Ohio and waiting to be cleared to come back to Werner in a week! I'll be driving a regional routed from Chicago land to east coast and back and home on weekends.. or so they say.. lol

Going solo was pretty stressful. First day my Rand McNally routed me onto a back road that ended up being closed. I still don't know how I got that rig turned around. Then heading to Union Pacific terminal in Joliet, IL, and my gps was way off due to lots of construction in that area. Once I finally made it and picked up my trailer, the tail light was missing completely, of course. I had to yank one from a nearby trailer so I could get rolling. I had no time to get it repaired. Next day I had to drop the empty in a container re-distribution yard in downtown Chicago at 1am. Once I finally found it, no one was there, just an empty dirt lot, so I couldn't leave it and had to go back home.

My relationship got ruined in the process. Starting a new relationship with this kind of job takes a special kind of woman and I guess she wasn't it.

I hope all is doing well and I'll be on the road soon!

Union Pacific in Joliet, IL.. and the wait begins! Their family is in NASCAR. Their trucking company is based on the automotive industry but doesn't do anything with NASCAR except one of the sons drives the 12 car.

Is it that big of a deal? Was I pretty lucky getting this gig?

I feel extremely lucky and plan to work my butt off! Soon to move to Mokena, IL near Chicago and start my new life with an awesome woman work hard and move up in the company and love life again.

#JustForFun: Where did your avatar name come from?

Military.. my nickname was SixKiller and eventually just started calling me Six for short and it stuck all these years.

Well, I was set to start with US Xpress Wednesday but got an offer I couldn't refuse. I'll be driving for Hornish Brothers, family of Sam Hornish Jr. of NASCAR. I'm getting a dedicated route from Defiance, OH to Buffalo NY, Buffalo to Ft. Wayne IN. I'll be home 3 days every weekend! Small tight knit company of 100 tractors and about 300 trailers, old school Kenworths. They usually don't hire rookies for the dedicated routes but my driving instructor from school knows them and recommended me. I start Tuesday the 4th. I'm so excited! I'll keep you updated.

I passed my driving test today