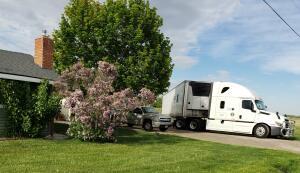 Within the first year I believe you’re screwed by most mega’s because they can’t hire you because of insurance. I could be wrong.

But for real don’t hit nothing else. Try your best to think before you act. Watch bone head truckers and see how truckers every week have accidents in the most insane ways and learn.

Your second option is owner operator but you’re likely not fit to take up your own with no proven experience.

I’m definitely saving to own my truck outright these companies have to many rules for me. Luckily with what the gig I landed recently I’ll have my truck paid off in three years to avoid these carriers who will ding you for minor accidents.

You can say a driver is basically non-hire-able but everyone deserves to have a fair shot at getting better. You didn’t hit anyone or injure anyone. It’s amazing how mega’s will do everything to stop a rookie from even improving. There is countless stories on here and truck report of drivers who had three accidents or more only to land a job through luck and never had a accident again.

But these mega’s will literally make that most will give up by their standards. But I’ll say this OP no more accidents man. You gotta nail it down if you land a new gig.

Even tho you've been on the road just over a year, you still have a LOT to learn.

You are wrong about the megas. Most of them are self-insured, so incidents are covered by them. Kearsey had a number of accidents and she is still with Prime. Also, your comment about "mega’s will do everything to stop a rookie from even improving", is just plain bunk. So, they invest all that money in trainees just to keep them from becoming drivers?? Are you for real?? That's just the stupidest comment I've heard. You need to get more experience out here!

The 2d option of being an OO is not an option for him at all. He still has more learning to do. IF he could get insurance, it would be insanely high.

You are wrong again. He WAS given 2 chances and then he had a 3d accident. What we don't know is his attitude with Safety at Wilson. While it is good here on TT, we don't have their side of the story. Something happened to cause Wilson to cut their losses and let him go.

But these mega’s will literally make that most will give up by their standards. ...this makes no sense.

Yes, they have flatbed...a couple years ago they were dedicated routes. They have a few hoppers and bull racks out of the Cedar Rapids account. They also have a few reefers.

Anyone else use a Garmin

First time using a Garmen, had more problems with it in 3 weeks then I ever had with a qualcomm.

Which model do you have?

Get on the road!

Long weekends? Who has those? XD

I went to a dairy goat show on Sunday in Boise and am still off til tomorrow when I pick up my cheese load and head to Greensboro NC.

Trying to get back into truck driving.

You will have to go thru a refresher at the very least.

Go thru our Study Materials

Then, use our One and Done app to apply to companies.

Others will be along and will give you more info. I took a 22 yr hiatus from the road while taking care of my Traumatic Brain Injured husband. I went to a school, paying for it myself. NOT the best way to go. Company sponsored is far better.

Holler if you have more questions.

1099s are for owner ops/lease ops. If you go that route, you are responsible for different expenses. A company driver can only be a W2 employee. So, these companies are trying to pull a fast one. Steer clear of them.

And also some of the people in this thread lol good lord what is happening around here.

What do you mean? There's nothing wrong with any of us.

I-15 just south of Tremont, UT 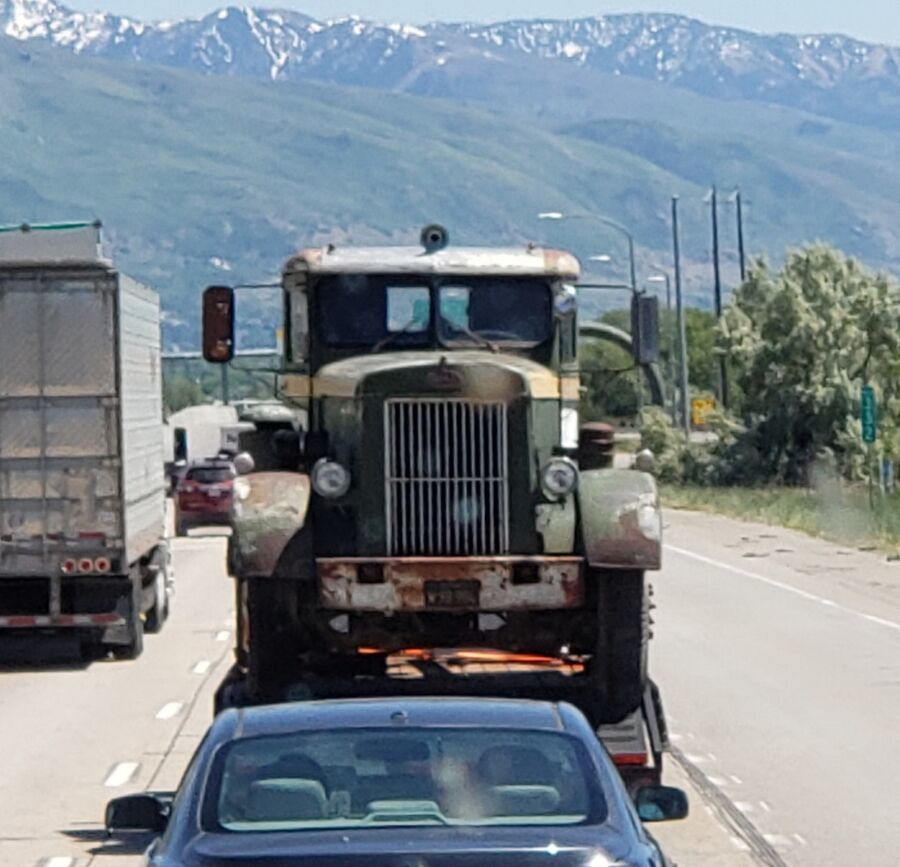 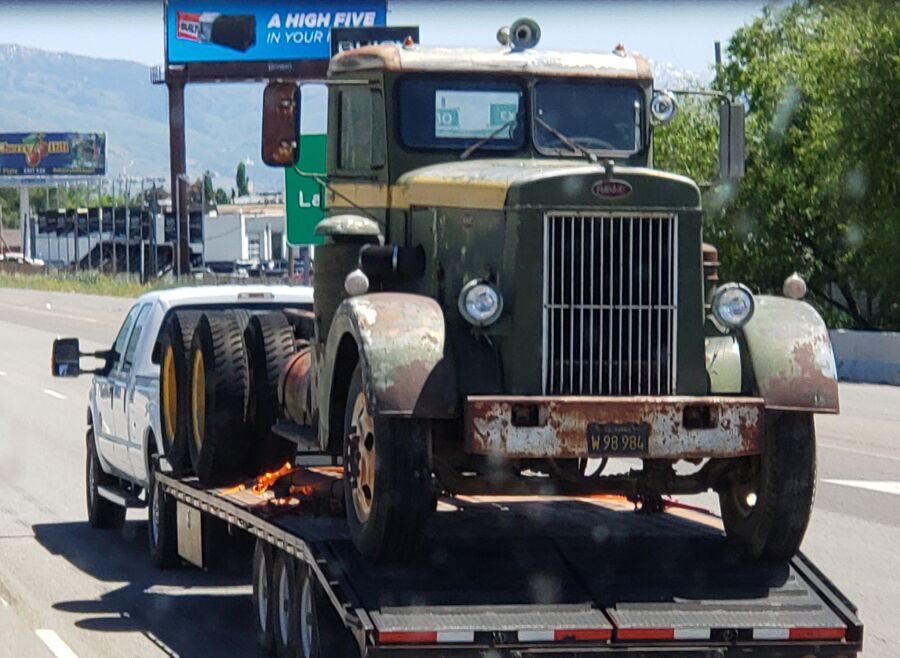 Ms. Laura .. I hope Tammy is doing well in and with her choices, and stops by here more often.

I'll help when & how I can, but it's kinda out of my wheelhouse.

Hope you work this out, Tammy!

Never heard from her.

Drive for owner/op of small sub

Do company driver for Prime for one year, then consider those other options.

While I would hope LOs would be vetted better at Prime than other companies, leasing is still NOT the way to go and you could end up on the short end of the stick like I was with a leasor to the company I'm with now...being owed $1800.00+ in wages.

There WERE a few workers with the spotlights...even at 1100…

No, many States do road construction at night...probably because of less traffic.

I just stopped in Boonville MO to wash my windshield and see you are just outside of KCMO. Do you get down that way very often?? I'll be going thru there about 0030.

My surgery in March 2021 was no issue at all. Passed my drug test. At 53 after cancer diagnosis, contemplating on retiring now. Life is short.

I am so sorry to hear that!! Yes, life is short. If, after 5 yrs you are still cancer free and want to work, think about driving then. Lots of us started in our 60s.

Best wishes to you.

1. Too tired and it's usually about 1-2 a.m. when I park, so can be really dark when I park. Usually less trucks in a truck stop during the day, easier to see and be seen when backing out.

2. Closer to grass/dirt for Monty 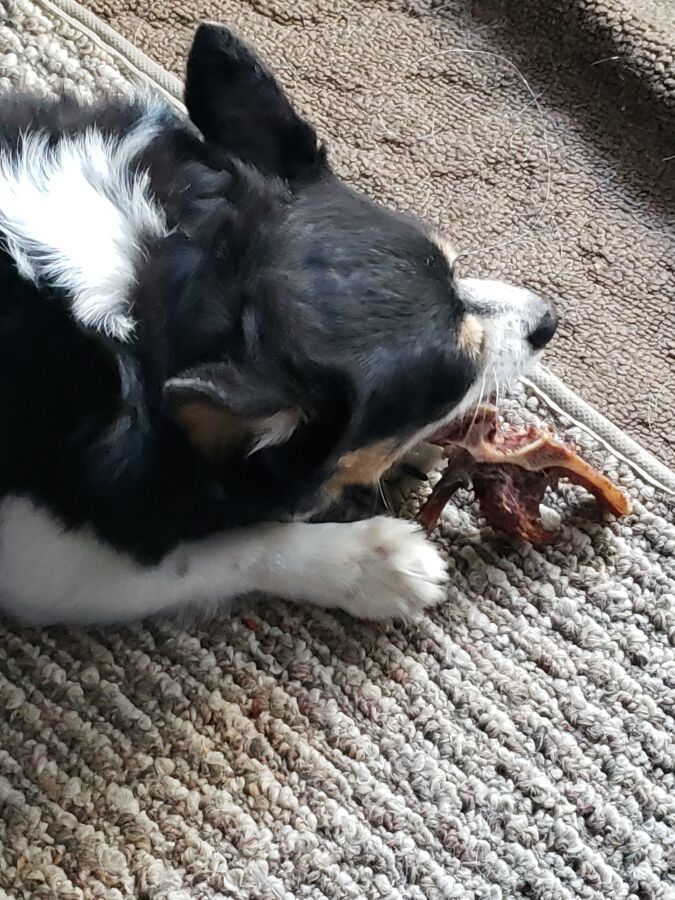 Monty eating a T-bone from his favorite friend 😁

3. I run a reefer on continuous usually. Lets other have a quieter night.

Got this text message from WYODOT on Friday:

Can a drop lot be completely empty?

I'm just hazarding a guess, but I would say that Roehl no longer uses that lot. An empty lot doesn't concern me near as much as the locked gates do.

Call the office and ask them. 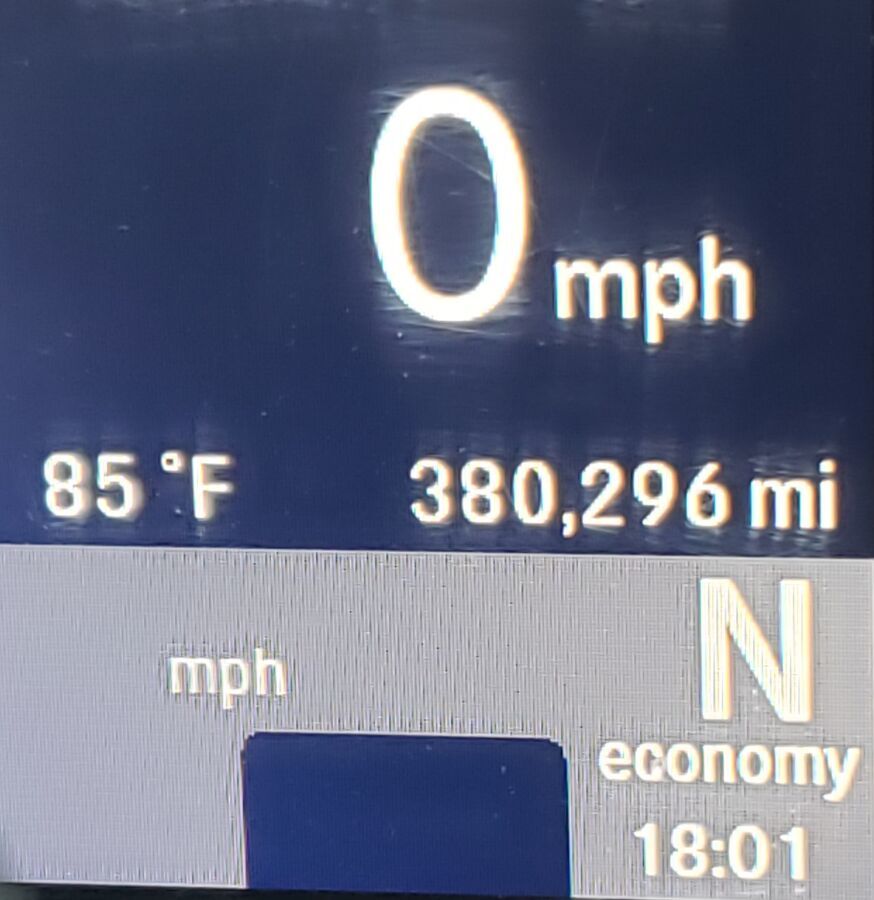 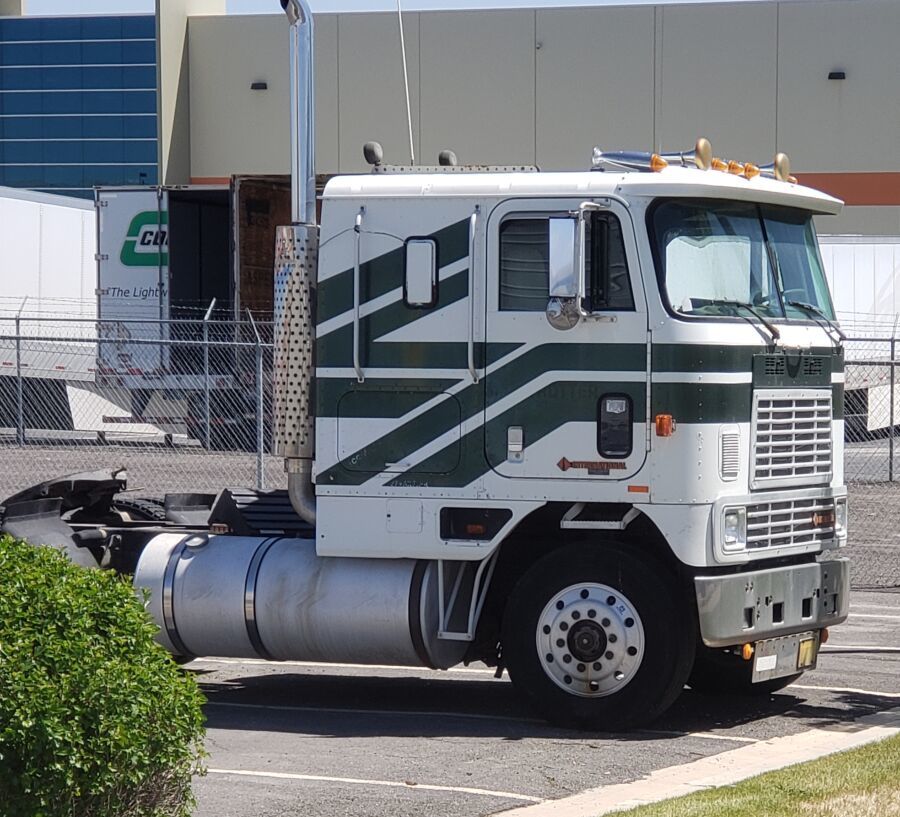 They've been around for quite a while. I've seen 3 & 4 axles on Wilson's trucks up in the Pacific Northwest previous to when I started 7 years ago.

I64 near Leavenworth IN: 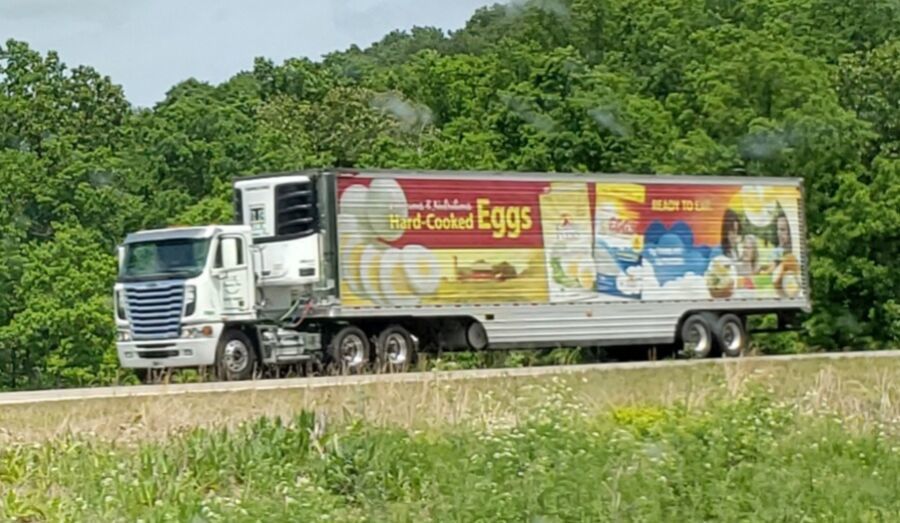 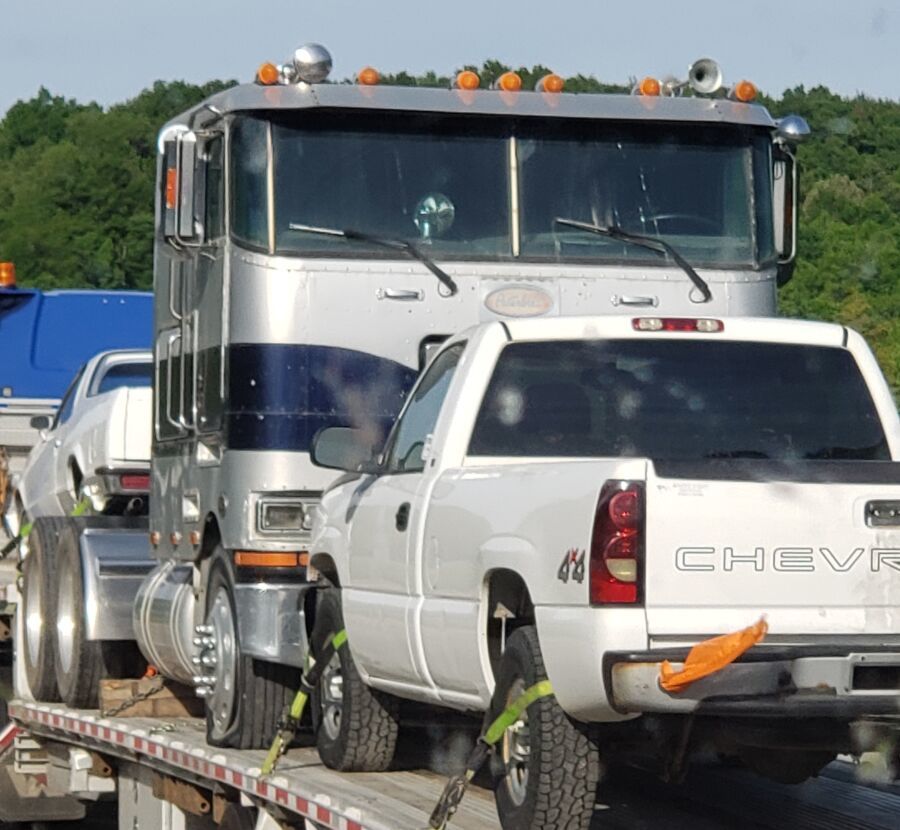