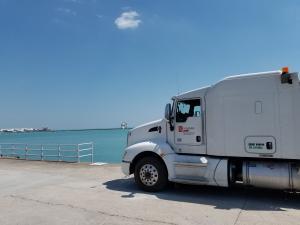 I've been driving for going on ten years and spent the last three driving open deck/ flatbed. I have a squeaky clean driving record and I've been seriously looking into buying my own rig and leasing on with my current company. I've hit roadblock after roadblock. I've had dealers and drivers alike tell me that unless I've banked somewhere near $50,000 for a down payment and backup cash and a stellar credit rating, it's not possible.

Is there a path for me to become an OO? I've been told that the startups are the hardest, but if I could establish some business credit, doors would open. I have mediocre credit and not much cash to back me up. $50 large seems impossible to me. Is there another path?

Thanks for any advice you can offer!

I've been driving about 8 years and have switched over to flatbed in the last 3 years. I got a little training on securement and tarping, but most of it I learned the hard way. In hopes of helping the newer guys and getting advice from the vets on what I'm doing I'm starting to make some videos on these matters.

Would anyone be interested in having a look at it and telling me what you think?

I was thinking of starting a YouTube channel where I filmed while I was driving - can set cameras to run on motion of the truck so safety is not a concern. But I was thinking I might talk politics as well as religion/ philosophy and lace it with driving tips for our 4-wheeling friends. I know I would love to have an interesting video or something to send to people where they would maybe have a chance of listening to how to drive with us big rigs on the road while being entertained with politics/ religion.

I still consider myself a "greenhorn" driver (going on only seven years), but I'm squeaky clean - no accidents no tickets - so there's at least some credibility there.....and I definitely have thoughts on politics and religion.....that's all I listen to all day!

Thinking about dumping my corporate job

I left the corporate world (restaurants) for trucking and it was the best decision I ever made. I started with Swift. Despite what some might tell you, they are a good company with which to start. Their training is six weeks, that's long but not too long (some are six months). Keep in mind that you're probably going to take a pay cut for the first year or two, then stuff will take off.

I could not recommend to you more that you go with a flatbed outfit like TMC. That was the one mistake I made moving into the industry. Flatbed and heavy haul are where the drivers are making up middle income salaries and are home weekends at least. I've got buddies who are approaching six figures. I've been running flatbed almost a year now and my income has gone up by about a third.

Yes, it's as hard as it looks. You earn every penny. But I'm in great physical shape and I feel good - more productive now in my 40s than I was in my late 20s. If you wanna make that move that's the advice I'd give.

I hear a lot of drivers worried that we're a dying breed because the self-drivers are going to take us over. I hear this all over the news, but when I've really looked into it, it doesn't look like their making real progress in getting 18 wheelers anywhere near the ability to self-drive. Uber has spike their auto truck program. I ultimately think the whole thing is going to turn into a glorified cruise control.

What's y'alls thoughts on this?