Ringo was an imposing, grizzly bear of a man with a beard like Dan Haggerty and, despite his thinning hair; he continued to grow graying, shoulder-length locks. He looked a bit like an oversized caricature of Hank Williams Jr. Ringo's resounding baritone voice left the impression that it might have shattered a wine glass or two in its time.

Heading Out For The First Time 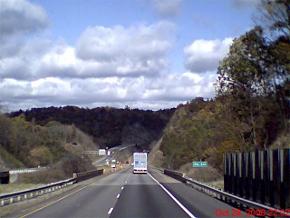 When he arrived to pick me up in the red, white and blue Mack, I loaded my gear into the truck in anxious anticipation of my first week on the road. As I began to settle in, I observed, in horror, only one sleeper berth. Having recently seen the movie "Brokeback Mountain", my perineum instinctively tightened. Ringo sensed my panic, and released a powerful belly laugh in amusement.

"The company's gonna give us a condo next week", he explained between chuckles. "We're stuck with this flat top this week so, we'll just have to do the best we can. You can have the sleeper the first couple of nights 'till you get settled."

I heaved a sigh of relief and Ringo continued to chortle for the next few miles.

Ringo had recently returned to the company after having spent the past year driving for a private owner. I was his first trainee. This would be a new experience for both of us.

Over the next six weeks, we traversed the southeast together and Ringo displayed a patience and understanding that belied his, sometimes, brash personality. Ringo could be described as many things, but boring is not among them. He regaled me with road stories and death-defying tales from his youth during our six weeks together. I never knew, with certainty, how much truth these tales contained but, oftentimes, an allegorical truth is just as enlightening as a literal one. Ringo was, without question, a bard of the open road. He also had a habit of bringing interrogative closure to many of his observations with the query, "You know what I mean?" I didn't give it much thought to begin with but, after a time, I began to wonder if Ringo were channeling the ghost of the late Jim Varney. To his credit, however, he did find time to provide me with training between yarns.

Since we were running southeast regional , we would get to go home on weekends. I would soon discover, however, that the company's idea of a "weekend" was often displayed by getting the driver home late on Friday evening and then, dispatching him on a load that required him to leave early on Sunday morning. The "trucker's weekend" was not something I'd been prepared for.