The first couple of weeks on the road were hard, because my body was not conditioned to this pace, this type of work, or these long hours. I lost most of the feeling in the tips of my fingers, and I had aches in places where I would have sworn I didn't have muscles. My former sedentary job was a world away as I wrestled with 130-pound tarps, threw straps, climbed atop towering loads, and stretched bungee cords to secure the tarps. Sometimes, this had to be done in cold, wet, or muddy conditions, but gradually my body began to adapt to the rigors of its new duties. My "road toughness" would not approach the level of Ringo's during the six weeks I rode with him, but I would eventually get it to a level that I would not have thought impossible. 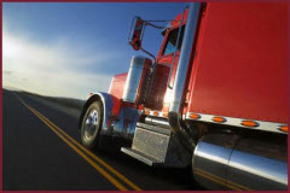 Heading Down The Mountains

Ringo also introduced me to some places on the map that make a new driver sweat. One such place was the Green River Gorge on I-40 in North Carolina. I had already heard some horror stories pertaining to "The Gorge," and I have since seen the aftermath of a rollover while driving through it. I came to realize, however, that The Gorge is nothing to fear so long as it is approached with respect and common sense. Accidents happen there because, quite simply, some drivers just go through it too fast.

I was nonetheless a bit tense the first time I descended Monteagle in Tennessee. I would later view Monteagle as little more than a bump in the road after traveling through the Rockies, but I attempt to never have a cavalier attitude toward descending a mountain in a big truck. I have never forgotten the words of Boom Boom in trucking school concerning this:

The Smell Of Hot Truck Brakes

We were taught to use a proper combination of using a lower gear, tapping the brakes, and the utilization of Jake brakes to minimize air brake usage but, if you are hauling a 40,000-pound load on a 6% or 7% downgrade, trust me, you'll have to use the brakes some.

I have smelled the acrid odor of smoking brakes more than once while descending a mountain, and each time I was praying that the smell wasn't emanating from my truck. This is an olfactory experience that every driver fears. I rarely speak for others, but I feel secure in saying that any driver will admit he'd rather smell a Taco Bell "chalupa fart" than to smell his own brakes smoking while descending a mountain.

Looking Back On Ringo

Ringo and I would sometimes enjoy one another's company, and at other times merely endure it. Overall, Ringo was a good trainer. He provided me with the basic tools I needed to fly solo, and he often gave encouragement when I struggled with my confidence. We remained friends for a time after my training, and later circumstances would require me to ask some favors from him, to which he eagerly complied. I still think highly of Ringo and wish nothing but the best for him and his family.

Finally, the six weeks of training had drawn to their conclusion and it was time for me to be assigned my own truck. I'd be picking up my truck at the company terminal in Mobile, Alabama. To say that I had an inauspicious beginning would be to redefine the word "inauspicious."

Nothing could be more exciting than climbing behind the wheel of a rig for your first run ever as a professional driver! Here's how it went for me.