I've been working retail far too long and am looking for change. I've got a few friends in the trucking industry and they've been telling me to go for it.

I've been doing quite a bit of research both on the industry and companies to work for. Currently in the "gather as much information as possible" stage before I commit. 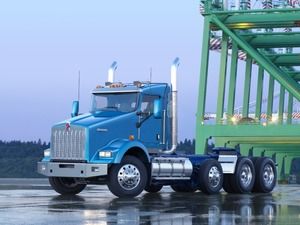 The way I understand it is that us Illinois folks get our commercial permit here in Illinois, then attend Roehls training. After that, you come back to Illinois to take the road test and get your actual CDL. Illinois is a weird state like that.

We have a video game!

I've been playing Euro Truck Sim2 for quite awhile and can't wait for ATS to come out. There are quite a few truck mods out there for ETS though and I'm currently using a Kenworth that looks almost exactly the one in the picture (with a fully functional steerable lift axle for those tight euro city roads). 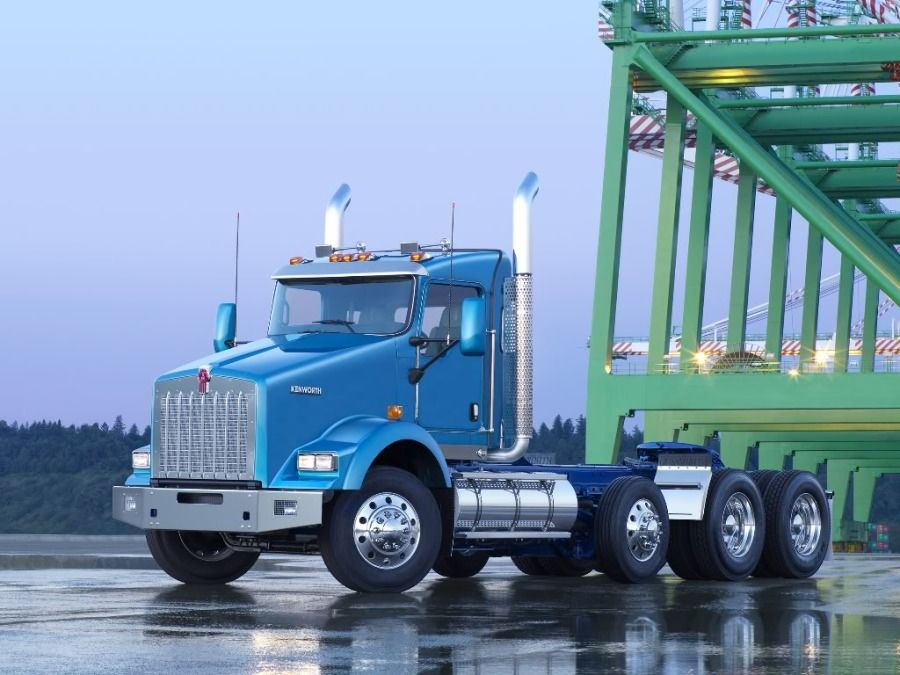 A Good Reason For Doing Your Pre-Trip Inspection

Since I've started working as a service writer in an auto tire shop, I've seen some weird stuff come out of tires. Keys, large bolts, small pieces of plastic that punctured just the right spot.

The most interesting one so far was one of those cheap E-cigarettes. I was rather amazed that it punctured it.

I almost forgot. Millis is putting in new LG tvs with dish network in all tractors. Free. 👍👍👍👍

Thanks for the input Photogirl! I appreciate it. You made quite the switch, Photography to Truck driving huh?

Good to have some input on Millis though. They have a terminal/yard not too far from me. That's one of the reasons I've been considering them.

I can't speak too much as to the usefulness of them personally but there are cell signal boosters out there made for trucks. I know they can run $300 and up. I've known a few people who've said they work good though. Just a thought.

I hadn't yet talked to a recruiter for the fact that I was waiting until I got my physical. I didn't think a company would cover the costs. I appreciate the information. I will get on it now

My recruiter is Stephanie Armstrong and she will get back to you asap. I think there is a drop down box when you complete your application.

Thanks for the info Tim. I really appreciate it. One way or another, I'll get my path straightened out. I apologize if I seem disorganized about the process. I guess I put too much thought into it.

Must be the hat!

Here I am at work these days: 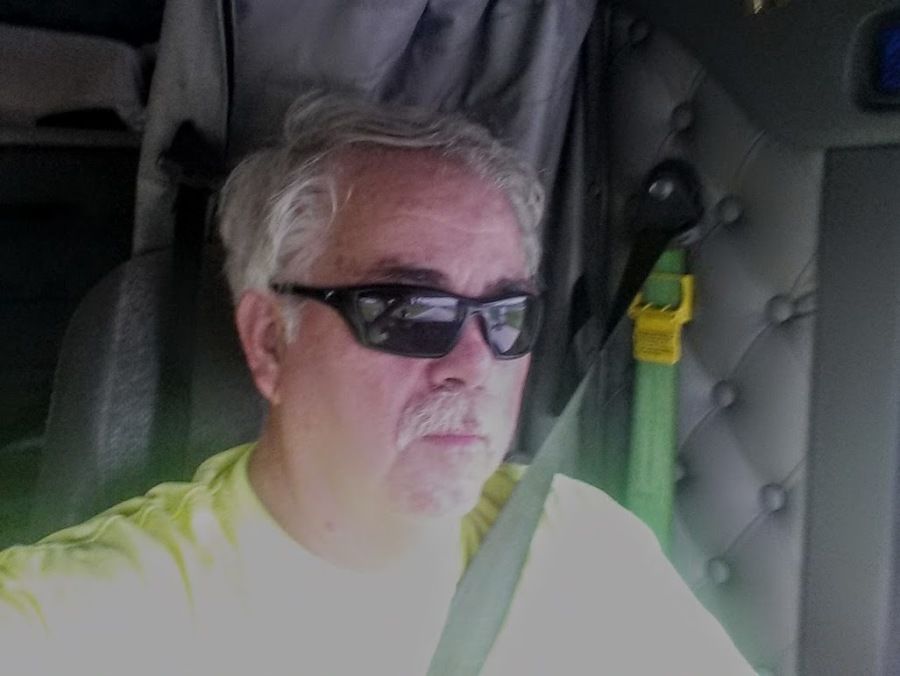 You aren't wearing the hat though! Haha! Put the hat on and knocks off quite a few years

I hadn't yet talked to a recruiter for the fact that I was waiting until I got my physical. I didn't think a company would cover the costs. I appreciate the information. I will get on it now

I've never noticed the graphics before on Prime trucks. Is that a recent thing?

Absolutely no reason to pay for this out of your own pocket. Roehl sends you to take the physical and they cover the cost.

The way I understood it is that I had to have my medical to get my CPL. The physical here is only $80 through my Docs office. My concern is that I have a few possible medical issues (The main one being the all-dreaded Sleep Apnea) that I want to make sure gets taken care of before hand. I don't want to waste the companies time going up there only to be sent home for medical reasons.

Thanks for all the info Gary! The job I'm working now doesn't afford too much free time or extra money so it looks like I'll be waiting a bit longer to get started. Anxious to get going but don't have the money for my physical or permit yet.

Never have been a fan of the color red but that is a whole new level. Very nice! Truly looks to be the color of my favorite Michigan cherries

Women can drive a truck, too. - Allie Knight

I've been watching her videos for about a month now. I'm addicted! Lol.

As Magoo said, her attitude towards her profession and life are part of what makes her so enjoyable!

I've been trying to get my wife to come to CDL school with me and I keep sharing Allie's videos with her. Not sure if its working or not

I've read some posts on other websites that have said that Millis drivers have low miles each week.

1) They wouldn't make any money

2) They wouldn't have any drivers

You can't compete in the arena of hauling freight if you're not hauling much freight. Now every major company will have a certain percentage of drivers that aren't getting good miles. Why? Because they haven't earned them. They are some combination of lazy, unreliable, or unprofessional. And somehow these same people have a gift for running their mouths everywhere they go and playing the blame game. Nothing is ever their fault of course so they go around bad-mouthing their company every chance they get.

Millis is an excellent company. They're hauling the same basic freight on the same roads using the same fuel under the same laws as everyone else. They're big, successful, and they've been around a long time. They'll have the miles available if you prove to them you can handle it. They wouldn't be where they're at today if that wasn't the case.

I fell into the trap that I had been avoiding up until that point. I know better than to believe all the negativity. That's one of the things I love about the TT, the fairness. Until I came here, I read so many negative things about quite a few major carriers that it was rather discouraging. Now I do my research but take everything with grain of salt. I've actually managed to steer a few people your way too! Trucking Truth is a great place!

Hi Joel! I've heard West Michigan CDL is one of the better private schools out there. I may be moving back to MI soon and that's one of the schools I've been considering along with a few company sponsored options. Let us know how it is!

Also, I've been looking into both Roehl and Super Service and they both seem like great companies. It helps that SS has a terminal in GR.

Me too matt every conversation i have with the wife always has roehl in it,she say's that is where i should go,mills or/even maverick are a close 2nd/3rd lets see what the others have to say

Haha same here Ken! Every time my wife and I have talked, Roehl is the place to go.

I've read some posts on other websites that have said that Millis drivers have low miles each week. Granted those posts are a year old but its something to think about. I know they're a smaller company but I don't want to be sitting around and not driving.

I've been really only considering one company sponsored training program (Roehl Transport) for awhile because its the program that seemed to be the best choice for me.

I just started looking into Millis Transfer's school (MTI) now. I was wondering if anyone has any experience with their school and/or works for them currently. I've read the information for MT on the TT but nothing beats "inside info".

A month of trucking with Daniel B.

Bump for anyone wanting a good read!

Thank you sir for the a great view into the life of a driver! As a guy considering a career, it's very helpful to have as much insight as possible. Between the High Road Training Program, both your posts and the other experienced drivers posts, The TT is a great place! I'm so glad I found this place.

Just heard back from my recruiter at Roehl and it's what I wanted to hear.

That makes sense but its a bummer that we wouldn't be taking the road test in the same trucks we train in. Glad we got that cleared up though! Thank you!

I'm taking my CDL permit test tomorrow and was told I need to prove my residency. They ask for the usual proof of residency, mail from government agencies, utilities, etc. with your name and address printed on the forms.

If I understand it correctly on the Michigan Secretary of State website, I can use utility bills and such in a relatives name as long as the relationship can be confirmed. That should be easy as its my dad & mom. I'm only a few hours away from where they are so it shouldn't be too hard to run up there for a few days and establish residency.