Tractor trailer drives up on car hauler during wreck

Just went through there the other day, I was wondering what the black spot on the road was from.

As much as I would like to give swift a chance they don't allow pets :(

That'd be the oldest drivers that want them

Most drivers i talk to throw a serious frown at the first mention of an automatic transmission.

Stubborn drivers who refuse to try new things... those are the same one who are mad about being forced to use elogs within the next 2 years... it's new so they don't like it...

I had to do paper logs for class (every day we used a paper log book and counted class time as on duty not driving, breaks as off duty, and had to do recaps and 34 resets)... I got pretty good at it but still would prefer an e log... it's quicker and you don't make mistakes that can cost you over $200 each... if you make a mistake in an e log... well you got bigger problems to worry about haha.

I hate seeing people say "if you can't drive a manual you're not a real trucker"... what does the tranny type have to do with being a trucker? lets look at what a trucker is... he/she is someone who drives a commercial truck to deliver various goods to various locations. that's what a trucker is. there are 2 types who prefer autos, those who can't drive manual cause it really isn't that easy to learn imo and then those who feel it's safer and more economical. with manual you gotta take your hands off the wheel to shift... auto you don't... safety... auto saves on fuel... manual... not so much... economical.

Truth be told at the moment i'm in the middle, I can't drive a manual (cause I have not learned yet, I have spent maybe 10 min trying to drive a truck so far and while I understand the concept of dbl clutch and the shift pattern of a 10 speed putting it into play is different) but I also would prefer an automatic cause it's safer, easier and better on fuel.

Why do you have to take your "hands" off the wheel? I only use one hand to shift. Most of the time your only driving with one hand anyway. I will never drive an automatic unless there are no other options.

Idk but I'm 6'3 260 pounds and those tarps gave me a hell of a workout yesterday. I don't think I really know how to properly handle them though. I trained on dry van not flatbed.

So I post that and then have the most demanding and challenging day of my 3 months into this career by far. By a very long shot. I ask why they call it suicide and my response is " Shotgun please!"

I love pulling flatbed but I am not a fan of tarps or Home Depot ladder loads out of Romeoville, IL. Stay away from home depots...beware!

Mark it up to part of the dues you have to deal with in training or call safety. My trainer was similarly an idiot. In the exact same scenario he refused to prepare properly, wanted to sit on the side of 90 during last years week long buffalo snow in, and the only reason we ended up moving to a truck stop is because the police made us turn around and leave before it got really bad. I've mentioned here several times that upon reaching the truck stop he refused to go in for the whole week and would **** right on the ground underneath the trailer with paper towels. Not all trainers should be trainers, it's something you can either just deal with or call safety/training about. It's actually quite funny that someone who refuses to put on chains, which is normally something done out of personal safety limitations, didn't prepare to sit. If he's going to sit for a week he should do it at a store/truck stop. That being said in hindsight, it worked out for me, but i should have called safety. Had we stayed where we were which was on 90 directly in the worst path south east of erie the snow would have been above the truck windows by the end of the day.

He was shutting under the trailor? Wtf!

Should I go with an OTR Trainer???

That's a real mountain you went down man! Used to live in Asheville. That one is 9 percent grade I think. I've drove it in car but not yet a semi.

I've been OTR for six weeks and am looking forward to making some real money for a change... Phox I lived in Asheville, NC for about ten years, beautiful place. Arden too be more specific (south Asheville) about ten minutes from downtown.

The Dangers of Semi-Trucks

Is this by Joliet? I'm at the flying j in la salle right now and I'm going there in the morning. I better be on my p's and q's I guess.

What to do/expect in a jacknife situation?

The school I attended didn't really say much about this topic and the company I hired on with doesn't have much of a training period...like 3 days to be exact. I've been driving alone for over 5 weeks now and just thought I should know something about this if/when the situation arises.

Just a funny trucking picture to brighten your day

Hahah this one's true all the time. 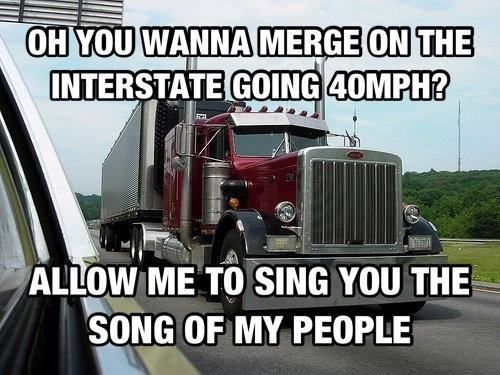 I'm 6'3 and 280 and my Freightliner Cascadia is pretty comfortable.