I'm proud to announce I became a certified Class A CDL driver 1 year ago today! Out of 40 students in my class (we keep in touch via a Facebook group) fewer than 10 of us made it through our Rookie year.

A lot of my colleagues had winter incidents. Jack-knifes, black ice skids, following to closely, fender-benders at truck stops when they were tired from driving all day & didn't GOAL just 1 time. Some just missed their families to much.

I'm not saying I'm perfect... I cracked another drivers headlight at a truck stop once (early morning, May 19th @ a Flying J in Oklahoma...I'll never forget). I was straight-line backing into a hole to take a shower after driving all night. Another driver (on my blind-side) was starting their day...decided to pull out of the hole next to me while I was adjusting my angle. Took just a second & I failed to notice them pulling forward as I was backing in. I GOAL'ed... but it was too late. The plastic shield covering their headlamp was in pieces all over the ground.

But I took my lumps, learned from my mistake & moved forward. I'm mighty proud to have made it this far & not a day goes by I take this for granted. It can all end in a split second!

Just last week I was coming over a bridge in Terre Haute, IN on I-70 & traffic was at full-stop on the other side of the bridge. I had +40k in the box and thank god I didn't panic. I threw my Jake on high & applied steady pressure to the service brake, coming to full stop about 6 feet from the bumper of a Honda Civic.

3/4 folks in my class didn't make it this far. I'm proud to change my status from "Rookie solo driver" to "Experienced driver" today...but I've got a lot more to learn.

Stay safe friends & KEEP THE SHINY SIDE UP! ☝

Super Flatbedders Could I Get Some Advice

TMC has some nice looking trucks! I've a buddy who went to school with me that recently went flatbed. (Gypsum Express).

The first thing he told me he noticed was the turning ratio. Apparently the trailer doesn't respond to your input as quickly/sharply as a van.

Wish I could give you more. Best of luck! 👍

...and I finally know how to correctly pronounce you're last name. 😁

Podcasts are all I listen to while driving! Woo-hoo! 👍

This program single handedly prepared me for my tests & expectations in the industry. I was ranked top in my class thanks to the High-Road program. 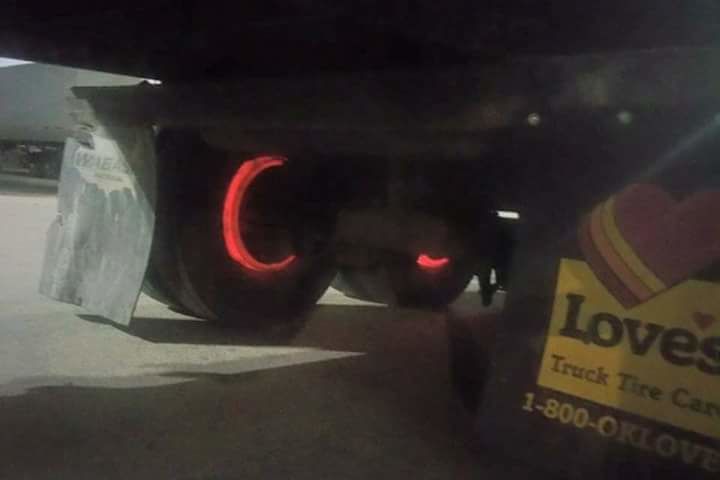 "One ring to rule them all!"

As a student driver, I'm glad you posted this picture. Just how easy is it too do this?

If you're not in the proper gear before heading down a steep grade... a lot easier than you would imagine. You've got 2 relatively small pieces of metal slowing down (up to) 80k pounds of weight...that's before calculating (speed x weight=force).

While I was descending Donners Pass, I was in 8th gear & using the Jake brake...I didn't have any issues. I think I touched the service brakes less than a half dozen times total (only during turns). There are multiple "mandatory" brake inspection stops for trucks to pull off along the way & it's better to use these than the escape ramps...if you catch my drift.

My run confines me to the relatively flat mid-west...although I did run Donner's Pass while OTR. There was snow on the ground in summer...I'd hate to run that route in winter!

I've unfortunately never had the privilege of running Donner's pass and probably never will now that I'm on a regional gig. That's crazy though. Which terminal are you out of?

They used to pass me around like a bottle of cheap booze. 😂

My run confines me to the relatively flat mid-west...although I did run Donner's Pass while OTR. There was snow on the ground in summer...I'd hate to run that route in winter!

Thanks Charlie, I've never heard of Vick's. I'll give that a shot. I noticed it's got menthol in it though, and that usually seems to help me.

How's it going btw man?? We've missed you around here! You still doing your shuttle run?

I pop on now & again...usually just reading. It's (finally) getting cold...so I'm growing out my "trucker beard". Did no-shave November & decided no stopping! Gonna try to do a "yeard" (beard for a year). 😁

I could see a humidifier causing trouble. If not mold...you don't want moisture in your instrument panels.

Try Vick's. If your not down with rubbing it on your chest...I've gotten a dust-mask & smeared the inside with it. You retain the humidity you breath out & the Vick's helps congestion.

Leaving trailer at the truck stop

Some truck stops expressly prohibit this...there will be signs.

1) Get permission (in writting if possible) 2) Kingpin lock!

You don't want to explain to dispatch why you lost a trailer.

They say a Pictures worth a thousand words. This one's more like a thousand bucks.

I want this LifeStyle!!

Welcome Jon! I wanted to be a Trucker when I was young too. Unfortunately...Patrick wasn't around to give me the solid advice he just gave you. I had a pretty awesome ride, was in automechanics class & we all decked out cars out to impress the ladies.

Cops aren't as impressed with fast cars as high school girls are.

Swift pays $10 an hour for all of your driving hours while training and training is basically 4 to 6 weeks. I'm not sure what Schneider's training pay is but their training is only a couple of weeks long.

This isn't necessarily true...Swift pays your home terminals minimum wage while on-duty not driving & an additional $2 while driving.

Anybody left a higher paying job in corporate America for trucking? How did it work out for you?

I managed an IMAX movie theatre & left for Trucking. It was a fun job...but I always wanted to be a Trucker.

I don't regret it one bit.

How to handle a blowout

Never lost a steer. That being said, when I've lost a trailer tire, 2/3 times I didn't even know... until another driver informed me on the radio

Importing pictures from my phone to my TT profile

Keep the shiny side up! 👍

Any updates for pam drug test

My brother-in-law just went out with his PAM mentor tonight. UA test (and LOTS of them). Don't think after your 1st test you're home free. You'll be tested every week in school & twice again during orientation/before going out with a mentor.