Profile For Cornelius A. 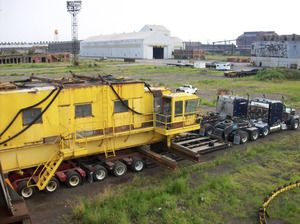 Comments By Cornelius A.

Even though we don't get to keep it our company still has to pay for it lol... 38000 pounds of rejected smoked hams in New Jersey for one of my clients ... great , he didn't tell me what he did with it

Last night one of my guys on his way to deliver a load in Indianapolis lost control of his truck and plowed straight into the forest triggering a hear attack and he passed away. Please if you are driving through Ina Illinois, honk and say a prayer for Bill and his family. thank you

It is a more and more common scam, they will take a picture of your license plate than proceeded to come up to you to take your picture. What they will do is go to the local police and file a police report , armed with that , they will go see a lawyer that will contact the company and try to collect money...we see more and more truckers falling victims of such claims in insurance .... as for the box in sudden brakes that Brett was talking about.... well that did not end well for one guy in Pennsylvania (luckily they were eye witnesses that confirmed the drivers story). So when these guys do that , their lawyers send a letter to the companies requesting they turn in their limits of liability which is by law $1,000,000.00 in the hope that it my get lost in the mail. If it is not receive by the court within 30 days they win by default.

I need some advice. Here is the situation. Last night about 11:15 l pulled off I-40 in Nashville heading for the TA to meet my brother (also a trucker). My trainer was in the back sleeping (as usual), traffic is a nightmare as a football game has just ended and it's raining. I get off the ramp and work my way over to the left lane to turn. While waiting on the light, a pedestrian walks up from behind and says I've hit him and takes a picture. I'm confused and tell him to follow me in to the truck stop (1/2 block on the left) so we can file a police report, at which he runs back to his car and drives off. I called safety and let them know what happened, but now I'm concerned. Wha should I do now? What should I have done differently?

School bus companies contracts with school districts are were all the board members make their money. There is a lot of bribing and political play going on in that world... and the company owners are the biggest corner cutters that exist in the transportation world... if trucking people thought they were the ones then they should rethink that again. I always like sitting down with this older gentleman in our office that specializes in school buses insurance (since 1974) and boy some of the stories he tells me about the school bus industry will make Al Capone look like a saint.

I think I understand why he was fuming , it was a pre loaded cargo and shipper gave his driver BOL indicating that the temp had been set at 28 degrees but when the driver went to deliver the temp in the ham was 44 degrees... I ALSO KINDA BLAME THE DRIVER HE SHOULD HAVE DOUBLE CHECKED

If the ham is required to maintain a specific temperature in transport (specified on the BOL), and that didn't occur, the receiver can and should reject it. If your client doesn't understand the basic premise of that, than perhaps his company should get out of the perishables business.

Refer to the link provided to Matt.

And ow do you transfer from profile to tread

Congratulations...I left Cuba today and I’m up in Kentucky now with a load shingles. Lowes DC tomorrow in Brownsville TN. Ok I took some photos....now how do we go about loading them now a days?

Hey Parrot, just got my permit and made my "enrollment" appointment with Sage in Indy. I will be in the November class, and if everything goes well finishing right around Christmas and heading to Cuba for orientation soon after that.

But the guy claiming his detention pay sat for 19 hrs if a company charges $60.00 per hr for not having their truck running with the 1st 2 hrs being free that means the company gets 17x60 =$1020.00 the companies I work with pay their drivers $20/hr detention pay so this guy is claiming 17x20= $340.00 which is not chunk change... I just gave you that one example just to show that detention gets paid to trucking companies because you suggested that it doesn't get paid and you omit the fact that I said that this company is 90% drop and hook. Just looked in my files and found a company that has 21 trucks including some reefers that had last year $ 75,000.00 in the detention pay (dem reefers) now redo your math.

That was for the year first 2 hrs are free then $60.00/hr there after. And for a company that mainly drop and hook those are a lot of hours

Ok you didn't say over what period of time. Geez, man. Come on.

What percentage of the company's yearly revenues come from detention pay?

Brett I respectfully disagree... I ask companies for their gross receipts every time and detention pay ALWAYS figures on it. I have never seen a company's financial report that does not future detention pay

If shippers and receivers were actually paying the money they owe for detention do you think they would be holding trucks for many hours at a time? Heck no. It's nearly impossible to get the companies to actually pay the detention time.

Brett I respectfully disagree... I ask companies for their gross receipts every time and detention pay ALWAYS figures on it. I have never seen a company's financial report that does not future detention pay

If shippers and receivers were actually paying the money they owe for detention do you think they would be holding trucks for many hours at a time? Heck no. It's nearly impossible to get the companies to actually pay the detention time.

Abrasions on steer sidewall--how bad is it?

I am not a trucker but I have seen a lot of OOS for less than that ..... thank God you followed Brett's advice

Personally I wouldn't do it. I wouldn't drive on a compromised steer tire for 1,500 miles knowing that if that thing blows it could be catastrophic. Companies will do anything to save a buck when it's not their life on the line. Like I said, it might last 50,000 miles or it might blow without warning as soon as you get up to highway speed.

Not to mention, I would think DOT would shut you down on the spot. I don't think you can have chunks taken out of the sidewall of a tire and drive it legally. Marks are one thing, but you have gouges taken out of the rubber. I'm not sure that would pass inspection.

That's one of those risk/reward decisions that just doesn't make sense. The risk is entirely too high. A steer tire blowout can be catastrophic. A drive tire or trailer tire is no big deal. You can lose one of those and not even realize it. Heck, you could drive with several of them flat and not realize it. But that steer tire is critical.

Don Wolding is a nice gentleman .... spoke with him earlier this week

And I will be the lone voice for Wolding. Did I mention our trucks are blue, lol.

Sometimes It Just All Works Out

2 legendary trucking professors having dinner together... thanks guys i have learned a lot from you thus enabling me to accurately give valuable advice to my indepent truckers

Jill I am not a trucker but I have read thousands of posts on this site and I know for sure that the guys here show the utmost respect for the family. Think about this.... he is asking you to get reed of the dog because he is jealous of the fact that the dog is keeping you company .... really? he should be worried about the safety of people out there when riding in this 80k# rig

Back on the road and updates