Common Sense and Situational Awareness will provide you an answer... it's totally unacceptable and flat-out dangerous to purposely park a truck in the middle of a public thoroughfare. Would you do that with your personal vehicle?

Checking the load? I'll defer to Chris and JuiceBox because they are flatbedders.

Ballpark it. You will learn what loads you need to babysit and which ones you dont.

For example.. rolled roofing I will stop at or before 150 miles and get the bar out fully prepared to tighten straps.

Eye to the sky coils I may stop a bit after 150 and check the straps by hand fully expecting them to still be tight.

Load check/tire check usually consists of a visual inspection with hands on strap or chain. It takes a minute and usually coincides with a bathroom break and fuel stop. It works for me but I'm sure others do it their own way.

A little backstory, sorry for typos as I’m on mobile. My last company where I was a yard dog, asked me to do a random drug test. I had just gotten off a deferred probation for a misdemeanor possession charge. The company knew of my probation and as soon as I finished they tested me. I passed the random test, then my supervisor (who I have had issues with my entire employment) told me two days after taking the random that I needed to take another random test. I told him that wasn’t right because “I took one two days prior. How is this random?” My supervisor said the other test didn’t matter and that I needed to take one that instant. I hesitated because he liked to “pick” on me and I thought he was being unfair and abusing his position. I wanted my plant supervisor to confirm this “random test” Within 5 minutes of him asking me to take another random, he told me to leave and not come back. Because me not agreeing instantly was a refusal. Now my question is, will this hurt me if I go to orientation and do disclose the situation. Is this considered a refused drug test? I completed probation and had to do a drug offender class and take a urine test every month. I’m afraid my bad relationship with my supervisor will come back to stop me from pursuing trucking.

You can be tested for drug test anytime the company wants. They are the ones putting an investment on you not once not twice but as many times as they want. For them to make a second back to back test on you, they wanted full clear indication and assurance that you are clean.... there are those hippies out there that do drugs the minute that they think they passed the first drug test...or they could have used someone else' pee/hair or even blood to pass their first time.

I passed all of my tests today and got my CDL!!! I'm in line at the DMV right now.

Orientation with C.R. England is tomorrow at 6am. I probably leave with my trainer on Friday.

I can't say enough about the trainers and training program at C.R. England in Fontana. They saw that I was working hard, but struggling with backing, and got me the help I needed.

I'm not sure when I'll have time to finish my diary, but I will finish it as soon as I can.

A huge thank you to Brett, Old School and everyone else here for your encouragement, advice and support. You are all a big part of why I was able to do this.

Congrats. Im looking forward to reading your diary and/or experience what went well and wrong with the classes, but I want to ask what was the difficulty rating (in your own opinion) of obtaining CDL from 1 to 10. (1 being the easiest ever to 10 being absurdly hard)

Common sense is one of the most important attributes a truck driver can have, in the top three, arguably number 1.

Combine that premise with situational awareness and I think you can answer your question.

Give it your best shot. What do you think? Operative word in the question is "think". Go for it...

True, but coming from a non trucker viewpoint and seeing all the guidelines that truckers have to do and follow the laws and recently reading Brett's interesting trucking biography, im curious to know.

So if you are in the middle of the highway and its been 150miles or 3 hours, if there is no shoulder parking on the road where you are at, can you just stop in the middle of the road and start checking your cargo there? I was curious because wouldn't you get a violation ticket from a cop if the last time you checked the cargo went more than 3 hours or 150 miles ago? Can you do that?

Service Failure if Truck broke down?

Lets say if you were hauling a load and you are about 100 miles away from destination and somehow your Truck broke down (transmission, engine block, axle broke etc, any) and you call dispatch, and your load is due that day in 1 hour, are you screwed and your driving record ruined, laughed at, humiliated, fired and companies never want to do anything with you ever again because something out of your control happened? Service Failure?

For starters, if you are 100 miles from the final, and supposed to deliver in an hour, well. hmmmmmmm

I have 100% on time delivery score, and I have been late 4 times. How? Communication. Stuff happens, accidents, breakdowns, longer than usual dock times, etc. But as long as you communicate with your dispatcher, things can be worked out. The "latest" I I have been is 45min, due to an accident on I90.

You can be the best trip planner in the world, and stuff still happens to throw a curve ball. Improvise, Adapt, Overcome... And Communication.

So they won't add a Service Failure on your driving record then, is that what you mean? But would you get paid for that load even though if they sent another driver out? Im assuming that the receiver is expecting that load that day but it could be delayed for an entire day due to unforeseen circumstances ? Whats the average time limit do they normally give truckers to deliver the goods "on time" usually?

It may depend on the state or city guidelines, but I think in general, if the road isn't posted it's ok. However I wouldn't make a point of using them. Most will have signs that will say no through trucks, or local deliveries only. Whatever you do don't follow your GPS blindly. Western Express does this regularly at abroad near my companies warehouse. Instead of making the first right on Rumery Rd like you see in the picture, they take the second right onto Skillings. Which is residential and well posted for no trucks. But because it's technically the shorter route the GPS takes them that way. There's a telephone pole on that corner the city has to replace multiple times a year. Don't be that guy lol 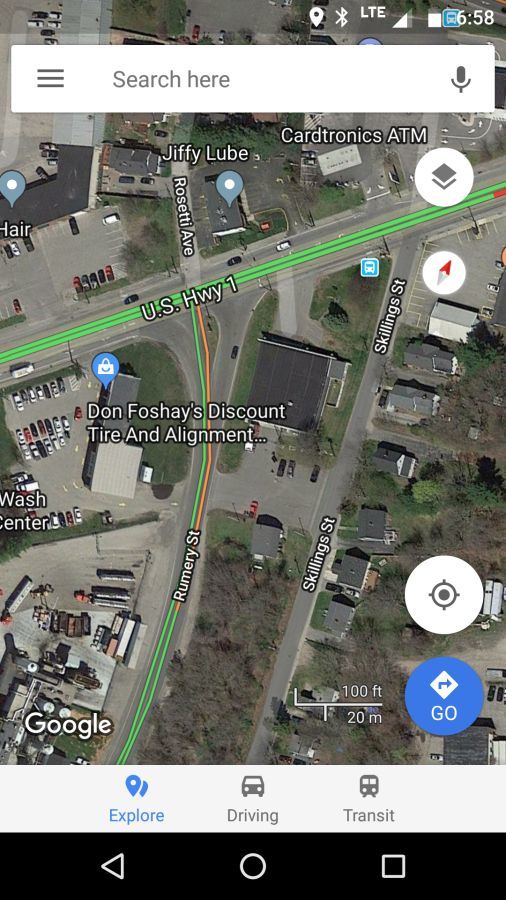 Service Failure if Truck broke down?

Lets say if you were hauling a load and you are about 100 miles away from destination and somehow your Truck broke down (transmission, engine block, axle broke etc, any) and you call dispatch, and your load is due that day in 1 hour, are you screwed and your driving record ruined, laughed at, humiliated, fired and companies never want to do anything with you ever again because something out of your control happened? Service Failure?

Welcome aboard Eri, I hope you don't mind us giving you a hard time - it's all in fun!

But seriously, going to all automatic transmissions will not flood the industry with new drivers. This is a very challenging endeavor, and shifting gears will be the least of a millennial's concerns. If you're interested in a driving career you've come to the right place.

Join in our conversations and read some of our materials - you will learn a lot by hanging around with us.

Exactly! Fill up the "shortage of drivers" by advertising automatics! That works. Trucking still gets a lousy reputation of some weirdo stomping his foot on the pedals constantly like some drunk marching band member. Although it would be strange if the clutch breaks in half or you cramp up. Automatics just seems more reasonable and with the times/current events than stick. Its not like you jump start your rig by having someone push it from behind.

Wrong. 9 out of 10 truckers I talk too all still drive sticks and when I mention aboutautomatics they always say "their company" wont/dont have them.

Hello Eri, where have you been? Did you just wake up from some other dimension?

Most drivers now days are driving trucks with automatic transmissions.

What do you do if you end up in a residential area? Will police ticket you and does that add marks to your driving record?

Since you constantly hear "driver shortages" for new truck drivers then why dont these companies start offering automatics instead of stick? The older generation of truck drivers are retiring and this would be the perfect time for companies to transition within the next 5 years into all automatics. New jobs would open up for technicians for repairs and maintenance and stopping and going for new drivers would be more focused on. If they are trying to intice younger/new drivers, then a smart move would be to get rid of all the manual stick shifts. Its an easy write off for the companies and easier for you. (for the new drivers) Driving stick must also be a waste of fuel. For uphill or downhill with full load they can install simple switch for grade slopes, still auto.