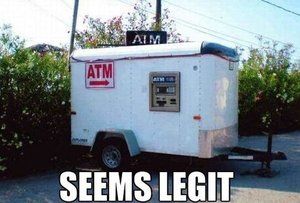 Also, just because the recruiter says you dont need it at Roehl doesnt mean you wont use it. By having it, you may get HAZMAT loads that others cant with no endorsement. Usually those loads have extra pay associated with them for HAZMAT.

Even though they dont require it, they may still have HAZMAT loads. It makes you that much more valuable to them if you can take loads others cant.

The Pilot off the Atlanta, GA. 285 bypass is to be avoided. It is the one located on Bouldercrest Rd. It's in a rough part of town, and parking is free, so you can imagine what type of activity you can expect.

This story was also documented on A&E's First 48 series if you have access to it on demand. Its season 12 episode 15.

Which direction are you traveling on Sea Harbor Rd ? Say the top of the photo is North. I would approach it in two different ways depending on direction of travel. Also, I assume the truck next to the planter is either leaving or backing into a door and wont be there while Im backing into the door ?

Members experience with best companies to start your career with

Wow ODFL is still around? Last I saw there equipment was run down and looked like they were going the way of CF. Basically meaning, union putting them out of business..... Don't know if they're union, but always suspected they were

Wow you are really ill informed. ODFL is one of the fastest growing companies in the business. Top of the line equipment and wages. But hey, never let facts get in your way right ?

Forced to Lease a truck??

What do companies mean by 'Home time'?

I understand your need to be home as much as possible, just dont forget the more time at home the less you make. Not trying to add more stress to your decision, just making sure you take it into account.

First year OTR pay at 35k would be hard to do with that much home time. Cut that number in half. Also those fleets will most likely require you to slip seat, meaning you would share the truck with other drivers.

While you are home, someone else is on the road with the truck so personalizing it wont be practical. You may not even be in the same truck each trip.

I would like to say I know I'm still a rookie when it comes to trucker know how and what not and it's really not my place at this time to even be able to remotely judge the driver, yeah calling him an idiot was probably a bit much, more of a heat of the moment kind of thing.

I don't know if my teacher today has more info then I did or if he was making assumptions but he told us (whole class) that the trucker was speeding and did not make the sharp turn on the freeway (look at a google street view of that part of i-10 and you'll see what I'm talking about) right and his tires hit the wall which caused a chain reaction of that then his trailer and so fourth. He also said "while I don't know this, he was probably also distracted too, messing with phone or burning his balls with a cig cherry or something" those were his words...

you never can rely on the news nowa days so I honestly have no idea what happened at this point except that a truck was flipped, trailer was hanging off the upper level, crushed a sign, and this morning you would not have know that sign was crushed. not sure if they replaced it already or just removed it cause I could not tell where it happened at on my way to school this morning.

To give an example of the unreliability of the news... recently had a hostage situation nearby one of our college campus'. news said they got everyone out safe, left, got a arrest warrant, came back and arrested him... that's not what I heard from hostage negotiation unit and swat team at my citizens police acadamey. they ended up shooting and killing him and never left to get a warrant... you don't need an arrest warrant when someone is holding someone hostage... that's like saying you gotta get a warrant before you can arrest a bank robber -.- news is just so dang inaccurate it's unbelievable. once upon a time they actually investigated the stuff they reported on and gave good useful info... now.. they just get some info from any source and don't even check to see if it's true or not then put it up on tv. anything to get those ratings and sell ad space.

So what have we learned here ? Dont be so quick to jump to conclusions and judge others ? When you get out there you will see how quickly things can go wrong. Until you get your feet wet, ease up man.

Since we are making snap judgements about strangers with little information to go on ........ Looks like a new class of infallible super truckers will be graduating soon SMH.

Are unions good or bad ? If this history was taught in America, the pitchforks would be at the gate.

A Peoples History of the United States 1492 to Present

OK so what's the deal with Prime lease?

And I wouldn't be sitting in a hotel room(I wish), I have to sleep in the sleeper berth at the truck stop.

Where do you think you will be sleeping OTR ?

No offense, but, you wont have much luck getting a job at Walmart or a fast food place with your lack of verifiable employment since high school and being terminated from 2 jobs that can verify your employment.

Im not saying you are a shady person because I dont know you. However, on paper, you will be looked at as exactly that. Remember, you will be asking someone to trust you with hundreds of thousands of dollars worth of goods and equipment. Based on what you have said, thats not very realistic to ask.

I mean why do you think they pay that much ? Because they want to ? Why do you think you are starting at .50 a mile with no experience instead of the .32 or .34 thats common with OTR companies ?

DSH, Why do you think FedEx is going to pay you $21 an hour to ride around on a forklift instead of $14 ?

Im shocked it took this long for politics to enter this discussion. Now we just need religion to weigh in and we can call it a day.

My intent was just to point out the best way to make a decision isnt from opinions on an internet forum. Decide whats most important to YOU and find out who can best meet your needs.

This is a great forum full of great information and it points you in the right direction. You are the one who must figure out whats most important and where to find it.

Best of luck to you

$4 sounds like alot until you consider the cost of insurance and what ever the retirement contribution is at Conway. For example, at Knight I paid $536 a month for health insurance coverage for me and my wife and kids. Thats a $6500 dollar a year raise I got going to YRC as its 100 % paid by them.

Im saying I knew all about the 15% when I signed up. Its part of the contract that was voted on an accepted by the union. They could have refused and lost their jobs.

The contract runs through 2019, again I knew that when I signed up. My guess is the pension will go away and a 401k type plan will be part of the contract negotiation in the next contract or YRC may make an offer so good the union gets voted out altogether.

So because my buddy at FedEx Freight doesnt like it there after 20 years I should come here and tell everyone its a terrible place to work and I recommend they stay away from them ? Who am I to say ?

I have heard that OD is a great place to work for about 10 years and once you reach the top of the scale they will look for a reason to get rid of you. Im sure thats complete BS from disgruntled former drivers but who am I to say ? I dont work there and I have no clue if its true or not and quite frankly it doesnt concern me. Thats why I keep my mouth shut and my opinions to myself unless I have first hand knowledge.