From Littleville I went to Jackson, Tennessee to load steel beams. The huge girders being ferried around by giant magnets appeared quite intimidating so, I was glad that I got to stay in the truck the whole time. Afterwards, having never tarped steel beams before, I wasn't quite sure how to attack the problem. Fortunately, another company driver out of Savannah spotted my dilemma and was good enough to assist me.

Getting A Helping Hand 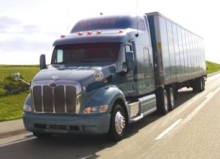 I've heard many of the old-timers complain that trucking is not a fellowship as it once was. I'm sure that is true but, in my own experience, I've found that most drivers are willing to help one another out if the situation calls for it. On the other hand, I have encountered the "every man for himself" attitude as well. However, the majority of drivers are honest, hardworking men and women who are willing to lend a hand.

After the steel was tarped, I was worn out. I was asleep before my head hit the pillow. I would be taking this load to Jacksonville, Florida tomorrow.

Aside from having to wait for over two hours to be unloaded, Jacksonville went well. From there, I'd be going to Georgia Pacific in Savannah to pick up a load of drywall. This one would test my mettle because, not only would I have to back into a tiny dock with my still-limited backing skills, it was pouring down rain and the entire yard was a huge mud pit. By the time I had secured my load in this veritable pigpen, I probably looked like a creature that had emerged from Scape Ore Swamp in South Carolina. As I sloshed back to the cab covered in mud, for a brief instant, I missed my comfortable TV job. I was covered in mud and muck, my feet were wet, and I had sprouted a world-class blister on my right hand. One of the bungee cords had popped off and snapped me in the forehead so, I was wearing an impressive knot as well. As the rain continued to pound down, to my utter astonishment, I began to feel invigorated—even euphoric! I couldn't wrap my mind around it but, for the first time in years, I felt… real.

I returned to the terminal for a much-needed shower. The muck and grime of the day's labor washed away and, along with it, any inclination of returning to my former life. This was still extremely hard on me, but I realized that I was embracing the challenge. Knowing that, the blisters and bumps, along with my weary frame, didn't hurt so much anymore.

My final delivery of the first week went to Alexandria, Alabama. My driver manager tried to give me another run after that, but I told him I was exhausted after my first week and needed to go home. Uncharacteristically, he didn't put up much of a fight and, three hours later, I was back in Scottsboro having completed my first week. The second week, however, would once again cause me to question whether I had made the right decision in becoming a trucker.