Stereotypes and Trucking: A Match Made in the Cab

Stereotypes and Trucking: A Match Made in the Cab

There are good stereotypes, and not so good ones. Stereotypes are part of the human experience. In social psychology, we've determined that children can start to marginalize by the time they are two years old. By the time they are five years old, they fully know how to stereotype groups, and know how to discriminate based on those stereotypes. Stereotypes among and against groups tend to change over time. For example, at one time everyone said FORD stood for "Found On the Road Dead". Now Ford outsells Chevy. Trucking stereotypes are unique because it has had the same set of basic stereotypes since the 1940s, and to a large part that's because of our own behavior as drivers.

Trucker Stereotypes Have Been Around A Long Time 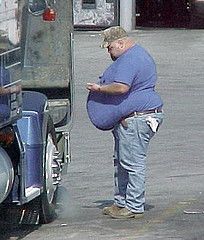 While Ford Motors has changed its corporate behavior and designs to improve its stereotyped image, many truck drivers have not. The very first trucking movie ever made was "They Drive By Night" in 1940, starring Humphrey Bogart. In it, Bogart plays a rough & tumble truck driver who gets into a lot of skirmishes in roadhouse diners, and argues with his boss over lost pay, breakdowns, and bad dispatches. Even the trailer says things like "They're on a race with danger", and "The High Geared Saga of Reckless Men...who find romance by the side of the road". Sound familiar? Again, this film is from 1940. What's changed?

As a Human Resource Manager in trucking, it's always been my policy to treat drivers as consummate professionals. The job is tough! As a former driver, I also know that there are a lot of bad apples out there. Drivers who try to dip their trailers into the other lane on purpose. Drivers who show up to customers without bathing for days or weeks. Drivers who are so obese that they can't get into the trailer to set a load bar. Drivers who find romance on the side of the road. Drivers who threaten their dispatchers (and others they don't like). All of these behaviors and more set the standard for stereotyping. The reason the general public sets the bar on this behavior for stereotyping is for one simple reason: it's simply not tolerated in mainstream jobs or society. Walk into any other industry or job, and using sexual innuendo will get you instantly fired. Making a threat toward your supervisor may land you in jail. Yet in trucking it's a mainstay.

Trucking Companies Can Do Their Part

In part as well, the industry itself has perpetuated the stereotype of truckers because most companies simply fail at enforcing any Human Resource standard. The fear is the "driver shortage." At the same time, we all know on a management level that the "driver shortage" is a misnomer - it's false. Most companies are simply unwilling to apply a Human Resource standard because it's too much trouble. As a Human Resource Manager, I treated my drivers as professionals because I demanded that they behave as professionals; not better than everyone else, but at least along the same lines that other industries would tolerate. If Ford, Microsoft, DuPont, Dunlop Tire, or any other industry wouldn't tolerate a behavior, then neither would I. While I was concerned about customers, driver safety, and service, I was also concerned about something else - good, professional drivers being marginalized and discriminated against because of the behaviors of others.

Stereotypes, good or bad, always lead to marginalization and discrimination of the "out-group." That's the nature of the social psychology of stereotypes. How many high school guidance counselors promote truck driving? How many drivers (or their family members) have felt ashamed when asked what they did for a living? How many car drivers are showing respect for the truck while on the road? How many times have we all seen the sign "No Trucks Allowed"? This is all because of the stereotype formed from behaviors that others see in drivers.

If any out-group wants to not be the out-group (i.e. marginalized and discriminated against), they have to do what Ford Motors did - change their image. Dressing appropriately for customers and the public. Showering every day (if you have time to fuel, you have time for a shower), using language that's appropriate, making sure that you're taking care of your health, and otherwise presenting yourself to the public (including management at the terminal) as a professional.

If you feel like screaming obscenities to your dispatcher , send an email to yourself with what you want to scream. I've done this, and it works! I always parked in the far back of a truck stop so that I'd purposely have farther to walk. It was good for exercise. If I was full from a meal, I'd walk around the truck stop at least once before getting back in the truck. It was rare for me not to fuel every day, so after fueling, I'd park and shower. When ever I showed up at a customer, I was always wearing clean clothes and a button-down shirt. I always showed up at least an hour early for an appointment. Whenever I was at my home terminal , I always stopped in to dispatch to say "hi" to my dispatcher , and was always customer service oriented when talking to him on the phone. I treated my dispatcher as a "customer" - the way I wanted to be treated.

How Rising Above The Stereotypes Will Help Your Career

My result was not just busting a stereotype in the public, but busting stereotypes within companies themselves. I've had many dispatchers tell me that I was not what they expected in a driver: safe, courteous, professional, and dependable. The side result was that I always got the better loads. By the end of my time as a driver, I was averaging 3200 miles per week consistently, and made great quality friends and business contacts.

For newer drivers, you're going to have older, more "seasoned" and less professional drivers who are going to suck you in to becoming the stereotype. It is possible to resist this. The trucking stereotype has been around since 1940. It's not going away soon. However, where will it begin?