The Need For Communication

The Need For Communication

As a former truck driver and current Sociologist, I was thinking about the 1980 movie "Blue Lagoon" with Brooke Shields and Christopher Atkins, in which two children are marooned on a desert island. The movie had its controversies in 1980, but spoke volumes about a fact that Sociologists and Anthropologists have always known: that communication; talking to other people, is a purely social function of our societies. Language is Cultural. 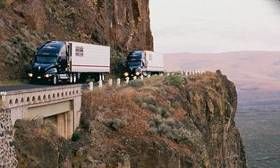 In the movie, two children communicate as children do. As they get older, with no social reference or control, their communication is not only stunted, it diminishes. Without society; without someone to talk to, there simply is no need to talk. Recent studies in Autism by psychologists also confirm the "social theory" of language. People with Autism have a deficiency in the brain that controls their "social reference" (the Amygdala area of the brain). The result is that almost all people with Autism have either a communication deficiency, or do not have the ability to talk at all. People with Autism have all of the emotions and desires of life that "normal" people do, but have absolutely no way to express their feelings in a way that the rest of society can understand.

Truck drivers as a whole tend to also have communication problems. Some research from the University of Michigan's Labor Studies Department seems to suggest that the social isolation of drivers diminishes their ability to effectively communicate. How many drivers have screamed at their dispatchers? How many drivers screamed at other drivers on the radio? How many drivers have "acted" with their trucks instead of expressing how they feel with words? These forms of communication are part of the trucking "culture," but they do not fit well in the rest of our society and are not easily understood by the majority of people in American culture. Imagine trying to speak Italian to an American. What would be the result? The result would be almost the same as it is with the "Trucking Language" being spoken to the rest of the world: miscommunication. Language is Cultural.

But Does Anyone Understand Truckers?

Most truckers, at least at some point in their lives, were able to effectively communicate with their social environment. The skill was lost in translation when moving to the driver's seat. If drivers can remove themselves from the Trucking culture and put themselves into the shoes of someone in the mainstream, communication could be better. Dispatchers can also do their part to learn more about the foreign culture that they are dealing with, and learn the correlation between social isolation and communication. In other words, communicating with another human being is a two way street. Going to Italy and screaming at the hotel clerk in Milan isn't going to get anyone a room at the Inn.

Keep In Touch With The Outside World

As a Sociologist, former driver, and Human Resource Manager for trucking, I always encouraged drivers avoid socially isolating themselves from the rest of the world. Engage the world outside of trucking. I encouraged people to call a family member or a friend outside of trucking every day. I also encouraged drivers to read or listen to the news. Keeping in touch with National and World affairs establishes a social connection with the greater world at large. Benjamin Franklin said that the purpose of Journalism was to engage the collective conscience of society. If a person reads the newspaper, and feels any emotion over an article, then they have become a part of that collective conscience.

Whether stranded on a deserted island, or stuck behind the wheel for a month, thinking about the way we communicate, or fail to communicate within our culture helps us to communicate better with everyone, and connects us as a society.