Rites of Passage on the Highway

Rites of Passage on the Highway

A "Rite Of Passage", as defined by Wikipedia, is a ritual event that marks a person's progress from one status to another. Ever since man crawled out of caves on his knuckles, there has been a "rite of passage" in the community. Rites of passage, going back to the tribal days of man's existence, have largely been religious in nature. In trucking, as in many areas of life, there is also a rite of passage - several of them, actually. Rites of Passage didn't disappear. They've transformed. 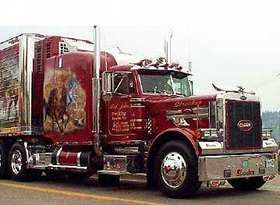 In 1893, a French sociologist named Emile Durkheim published a book called "The Division of Labor in Society," which in part posed that, because rites of passage from our "tribal" days were no longer being practiced, that we as a society were experiencing a loss of norms, values, and a cultural loss (in French, he described it as "Anomie"). Durkheim posed that as individuals in a modern world, we were no longer socially connected to our communities.

While Durkheim may have missed the mark on a few levels, he was on to something, especially as it relates to today's trucking culture. Rites of passage are everywhere in our society. First Communions for Catholics and Bar Mitzvah for Jewish people are a couple of religious examples. In the military, there is the transition between enlisted and the NCO Corp, for example. In the factory, there is the transition to Shop Foreman. For Walmart, the transition from hourly employee to salaried employee is a rite of passage. A rite of passage always marks some transition in life in the eyes of the community.

In almost all cases of rites of passage however, the actual rite has to be earned. You don't get the promotion unless you've earned it. You don't make First Communion unless you put some work into it. The Military pilot doesn't get the new airplane unless he/she has proven themselves a capable pilot.

A society is simply a group of people gathered together with a common interest. While truckers may believe that they are "not the same," and certainly there is a unique culture in trucking, the fact is that every society has a basic framework - rites of passage being one of them. It takes a concerted effort to destroy the basic framework of a group, and such groups really do end up with no values, no norms, and no culture.

While many truckers, especially those that are new to the industry, may believe that they deserve brand new trucks, the best loads, and special favors, the fact remains that they have to prove themselves first - something every industry (society) does. When you finally do receive the new truck, or start to get the better loads, you know you have "come of age" and received a rite of passage that lets the rest of the community know that you've proven yourself. In that, there is no greater pride.