Today feels like a new beginning. I've never been afraid to try new things. I've never turned away from a challenge or a new path. But I also never thought I would find myself living in a semi truck with my truck driving husband, going over-the-road for twelve weeks at a time. What would possess me to do such a thing? I'm glad you asked. Maybe telling you about it will make it clearer in my head. Maybe I can share the adventure with you. Maybe, one day, you will be faced with a similar decision and this account will help you make the right choice for you. 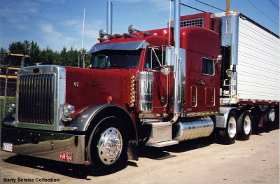 My husband, Dee, is a twenty-four year veteran truck driver. Before that, he served in the Navy for eight years. That is when I first met him. We were both married to other people at the time. We were friends for a while until transfers happened and we lost track of one another. We never thought to see one another again until twenty-six years later, when we reconnected on Facebook.

After our reunion via the internet, we spent three and a half years getting to know each other and becoming great friends. We had so much in common, we found it to be eerie sometimes. We began to finish each other's thoughts and think of the same songs. He kept telling me that we belonged together. I kept telling him he was wrong. I finally flew out to see him for a few days, to prove to him that we made great friends but that was it. A few days later, I flew home in a state of utter confusion. You see, the man I thought was destined to be my good friend became the man I loved, just that fast. He was the one who did the proving.

When you reach your forties, you have a lot more experience to go by. You know what you want, and you don't need loads of time to know it. And so, Dee and I decided that summer that we wanted to get married, and by the end of August we were standing in my mother's back yard, enjoying a beautiful Hawaiian style wedding ceremony with forty of my closest friends.

We had already agreed to move to Arkansas, he from Oregon, and me from Illinois, to start a new life together. But he wanted to give up truck driving. He wanted to come home to me every night, and I did not want him to be apart from me as truck driving would part us. So Dee went to work locally and I searched for work. The local agencies told me I was overqualified for anything here, so I had to expand my search to a bigger city. Pretty quickly, Dee and I realized that things were not going in a direction we were happy with. He began to seek a local truck driving job, one that would allow him to come home every night. I sent my resume to the city, knowing that I was looking forward to a long daily commute. No, this was not what we envisioned at all, and neither of us was happy about it. Then, Dee got a return call from a recruiter he had phoned.

Although we thought the ad was regarding a local job, it turns out that he was recruiting for a regional driver. Dee told him that he didn't want that because he was newly married and wanted to come home to his wife every night. But then the recruiter countered with those fateful words "you can take your wife on the road with you." And so, Dee brought that information to me.

I think there was some hope in him. He didn't really believe I would be receptive to the idea, but he was a truck driver, and that was what he knew. So when I said to him "well, let's talk about this. Why don't we consider it?" he was floored. In a matter of three hours we went from an uncertain future to an over-the-road couple. And I could tell this made him happy. He felt a calm, a certainty, that he had not had in a while. He was content. I could see it in his posture and in his face. That made me happy.

And So The Adventure Begins

We began to plan our big adventure immediately. I had to do a lot of planning for our household in order to go trucking with my husband. All the bills had to be delivered to me via email. The paper needed to be cancelled. The cable, for which we have a contract, had to be reduced to the smallest available package. Arrangements had to be made for someone to keep an eye on things. We knew we had to fulfill the balance of our lease and so we decided to keep this as our home base for a while. Some decisions, like whether to keep a household or put everything in storage, can be made later.

Living in the small space of a semi truck sleeping cabin is not at all like living in a normal living space. I began to consider the limitations, and to ask my husband a lot of questions. I read as much as I could online. I learned a lot, and I knew that there were some things I could not plan for until I saw the truck that was assigned to Dee. I found out about inverters, cooking in a sleeper cabin, showering at truck stops, and what seasoned truckers recommended you take with you. Because that is what I do. I plan. I organize. And I go crazy when I don't know what is next.

I dropped my husband off at orientation today. He will stay at the hotel for either three or four nights. We could not find out which it was for sure. There is a process, and each person is in charge of just his or her something. In this case, the guy in charge of orientation does not know which truck we will get. But he tells us that Dee will talk to his manager Wednesday and can ask all the questions then. Meanwhile, I sit and wait. And I plan. Because that is what I do. And as things progress, I will gladly share my experiences with you.