The Placement Of Cargo

The placement of the cargo in the trailer will have a tremendous impact on the distribution of weight across your axles. Properly loading the cargo will get your axle weights pretty close initially so that a minor adjustment may be all that's needed to get your axle weights legal. Improperly loading the cargo could place too much weight to the front or rear of the trailer, preventing you from being able to balance the weight across the axles properly.

Let's take a look at some factors involved in properly loading cargo. 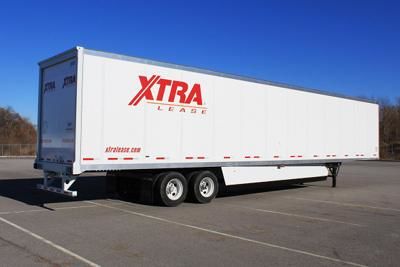 Everyone is familiar with the concept of using a lever. Using a lever on an object allows you to exert more force upon the object than the amount of force you're actually exerting against the lever itself. In other words, you might rig a lever that can lift a 250 pound boulder but requires only 50 pounds of force against the lever itself. When loading cargo into a 53 foot trailer, leverage can come into play.

This is another reason that when you're estimating a load's center of gravity, you'd rather load the freight with the center of gravity a little closer to the nose than the rear. If there is room enough to do so, you can always move some of the cargo to the very back of the trailer to help balance the weights properly when sliding the tandems all the way forward won't do it.

What will be the ultimate limitation that prevents you from putting the trailer tandems as far to the rear of the trailer as possible?

If unsure of the exact location of the center of gravity of your cargo, you'd rather have the load a little closer to the front than to the rear. You can slide the trailer tandems forward as far as you would like to compensate for too much weight on the nose of the trailer, but the kingpin to trailer tandem length limitations will prevent you from going too far back with your trailer tandems.

A lot of times you'll be loading mixed cargo which will make it quite difficult to determine the exact center of gravity of the load. So when you're making your best guess, try to make sure it's a little forward of the center point between the drive axles and trailer tandems. That will give you the best chance of being able to adjust the trailer tandems so that the load will be legal.
Prev
Next
Ideally, where would you like the cargo's center of gravity located?

You'll want to have the cargo loaded into the trailer so that the center of gravity is centered between your drive axles and your trailer tandems.

Because the trailer pivots up and down at the kingpin above the drive axles, the floor of the trailer acts as a lever pushing down against the trailer tandems when freight is loaded into the overhang portion of the trailer. The further back you load the freight into the overhang portion of the trailer, the more leverage it creates. The net effect of this leverage is that you're putting more weight on the trailer tandems than the cargo itself weighs, and you will actually take a little bit of weight off the drive axles at the same time.
Prev
Finish
Please select an option
[1,3,3,3,2,1,4]
7
Page 113:
Positioning The Trailer Tandems
Page 114
Page 115:
Fuel Weight Distribution