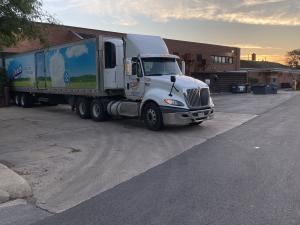 How many of you quit trucking?

Any podcast or audiobook recommendations for those long drives?

Joe Rogan experience is always interesting. He interviews people from all walks of life.

The Last Podcast on The Left is a true crime podcast. It has elements of gruesome crime stories but also comedy to lighten up the gory details.

Casefile is another true crime podcast but it is very dark and gruesome.

Want to be a car hauler with little or no experience

Are you by chance located around Chicagoland?

Generally speaking you’ll fit underneath a bridge marked 13’ 6”. But I highly recommend turning on the flashers and taking it nice and slow just to be safe. I have also fit under a 13’5”. Again creeping underneath slowly as possible. I had prior knowledge from another driver that I would fit under this bridge though. Otherwise I’m not exactly sure if I would have tried to make it or not.

I have had a lot of good luck in this career. You also get out of this career what you put into it and I have worked very hard to make it to this point. Thank you all for the kind words.

Thank you Old School! Nothing like seeing the ole 13’6” bridge sign. Or even better the unmarked ones...

You get used to it. I’m out in the suburbs nowadays. I enjoy the challenging backing maneuvers. Keeps the job interesting. What I will never like the is anxiety of low bridges everywhere.

Just wanted to share an honest self review of my driving career so far. It's had a lot of ups and downs. The self reflection has helped me and maybe could help others.

My career basically started here. Ive always been fascinated by trucks so i decided getting a CDL was a career path i wanted to venture into. That's when I found this wonderful site. I spent months studying,researching and preparing myself for CDL school and my first driving job. I started (private) school in October of 2015. Spending all the time studying on this site put me way ahead and i was feeling confident as ever in the classroom side of schooling. I still remember my first time driving the truck in the yard practicing straight backs. It felt somewhat natural to me and in 5 short weeks i obtained my CDL on my first attempt taking the test at the DMV. I was riding high at this point! I was already set up to attend Roehl orientation the following week and was feeling good about life. I went to Roehl's Appleton terminal and a week later was out with a trainer. I hit the trainer jackpot. He was 3 time driver of the year and more importantly a great human being. He taught me so much. To this day i still think of him and the knowledge he instilled in me. I thrived with him and 2 and a half weeks later was assigned my very own Pro-Star in mid December 2015.

The first week solo was tough, but i made it through without any real problems and quickly became one of my dispatchers go-to drivers (averaging 2400-3000 miles per week). I was good at every aspect of the job except for one of the most important parts. The lifestyle. I wasn't mentally prepared for the living in the truck aspect and it slowly burnt me out. My attitude was negative and I let it get the best of me. Fast forward to June 2016. After a string of terrible consignees and hours upon hours on docks, I quit. Still one of my biggest regrets in my 29 years on this planet. I have no one to blame but myself. Roehl was a great company to me. I had only 9,000 miles left before my obligated 75,000! I was so stupid! I was able to save up a decent amount of money working with them and paid my way out of the contract ($4800). At this point i had no back up plan.

I got home feeling like such a loser, but was also relieved that I didn't have to live in the truck anymore. So I decided to go onto craigslist and man did i get lucky. A family owned distribution company had just picked up a big contract and needed drivers. I lived 15 mins away from their yard. I immeidiatly called them and was hired on the following day after short interview. This job was a different world of truck driving compared to Roehl. I got lucky again with a good trainer and learned how to drive and deliver in Chicago. Fast forward to today and i still work for this company. It's been a bumpy road learning how to deliver milk, but now i am a true professional at it. I put this truck places i didn't ever think a truck would fit. In my 4 years of employment here i have been fortunate enough to purchase a beautiful home, a car, motorcycle and a hot tub.

Trucking has been great to me. As much as i regret quitting Roehl my timing in doing so couldn't have been better. I am one of the top drivers (humble brag) at my current company and make a decent living. I have learned so much about the industry but more importantly, i have learned a lot about myself. To this day this site continues to be a resource for me. So to Brett i say THANK YOU! You're the man. You have helped me more than you'll ever know. If you're reading this and thinking of getting into trucking please remember it's a lifestyle as much as it is a career.

Yea for real. I could maybe, and I stress maybe, see trucks having an autopilot feature similar to airplanes. Driver is still in the drivers seat hands on the wheel and paying full attention while the truck drives it self on the highway. Still not a system I would want in my truck.

As someone who drives in Chicago and surrounding suburbs I can’t imagine a truck navigating itself around low bridges, taking tight turns and making backing maneuvers into some of the docks I see. Especially the ones where your using a busy street waiting for a small break in the traffic to set up and back the trailer into the dock. Tesla may have the best self driving system right now and it’s faaaar from perfect and that’s a tiny car. But what do I know, I’m just a truck driver.

I also think it’s kind of funny to think that if you’re in the second truck, your expected to sleep while your truck drives it’s self at highway speeds...

I would have terrible anxiety having to trust the computer software in the truck to get me where I’m going safely.

Seems like unnecessary risk. Why not just let one tractor pull multiple trailers?

I have limited knowledge about owning a truck. What I do know is being a good driver is a small portion of being successful. You need to be part accountant and part mechanic to have any Chance at making it. Best of luck in your ventures though. I’m rooting for ya.

Though I didn’t work for PTI, I worked for another company that had a Georgia pacific dedicated account and it was a good gig.

Company wants me to pay

I work for a small company and pay for my own physical. My thought is I have no problem spending $80 to have the ability to make $75,000.

I drive around chicago and the suburbs All day and the lack of traffic is kinda of freaky. But I will admit it’s been much less stressful and that’s the only thing I’ll miss when the pandemic is so Over.

I live in IL and am so happy to have a CDL right now. Almost everyone I know can’t work meanwhile my company is busier than its ever been before.

Hats Off to the Grocery Delivery Drivers; Shelves are Full

I have never seen this much milk being delivered before. We generally have between 18-20 loaded trailers delivered Per day. The last couple days we have seen up to 40 loads. Very happy to be able to work still.

I would highly recommend Roehl Transport as a company to get your CDL. They have great training and multiple home time options. But before you do anything please please please You and your husband research and understand what he is getting himself into. Trucking is a lifestyle and the fact that you are having a child in 2 months is going to make a challenging career even harder. A lot of people get into this business as a way to make “quick and easy” money and they underestimate what it takes to be successful. I am one of these people! Thankfully after a lot of hard work and discipline I plowed through and have found success, but it was not easy. Best of luck to you and your husband! Trucking is a rewarding and finically stable career but it is also a lifestyle.

The media is doing what they do best with this. Inciting fear in the general public. Remember the Ebola scare?

Wait a minimum of 90 days. Cut your hair down to 1/2 inch. Shave all your body hair now and then do it again after it grows out 1/4-1/2 inch. Find a private testing center near you and have them pull sample from your head to be tested.