Comments By Pete B.

William J., I just see a whole lotta bad decisions being made here, by your friend. If he’s not going to use the navigation system supplied by his company with the truck, then he should have made himself real familiar with the trucker’s atlas, or have at least invested in a professional GPS programmed for trucks by one of those companies like Garmin, Rand McNally, or RoadPro. You reported he was using his phone’s GPS to begin with, which got him lost, and sticking with that same phone’s GPS to get him out of trouble? It should be a surprise to no one that he wound up in that predicament. I’ve taken a wrong turn on a back country road before, but I just kept going ‘til I found a suitable place to turn around (7 mi later). Did not interact with my phone or Qualcomm. The road was narrow and I was unfamiliar with it. And no, there is no reason to mess with the Qualcomm while driving. In our trucks, when the wheels are turning we can’t interact with any of its functions anyway.

Seeing phones mounted on others’ windshields and dashes: what constructive point are you making? You’re not suggesting a hundred wrongs make it right, are you?

And Mikey B, phones and CBs... apples and oranges. Do the differences really need to be enumerated?

C’mon guys, stop arguing this stuff... be professional and be better.

Re: CDL schools, not all companies have in-house schools. At the time I began working for Schneider, Schneider did not. So I went to a private school. Yes, you do pay all of the money up-front, but most companies, as Schneider does, offer tuition reimbursement with a one year contract, the payments made in installments throughout the year.

Those are some great photos, Pete.

Get you head inside the cab!

Ha ha! It was! I grabbed those from my dash cam video.

I froze some frames taken from my dash cam:

So many gadgets, so little space....

Timothy, I’d like to shed some light on one topic you’ve raised: that Schneider seems to pay really well. That leads me to believe you are about to make your first and one of the most common rookie mistakes, and that is believing that higher cpm’s = better pay. I know the high cpm’s Schneider advertises with its tanker division seems very appealing, and they may even be offering a significant sign-on bonus in the area you live… but the reason for the high cpm’s is to compensate for the low miles.. the average run is not very long. And most of the time you are given considerably more time than is needed to complete the assignment. That means you end up sitting. A lot. I firmly believe that if you subtract out my sign-on bonus and tuition reimbursement, I would have made more money in Schneider’s s dry van division because 1.) I only asked for time off twice during that first year (for 3 days and 1 day) and 2.) I studied and followed Old School’s rules for success. Which brings me to my next point.

The only thing I think Schneider does wrong is putting brand new CDL holders behind the wheel of a truck hauling tankers. Learning to drive big trucks is challenging in itself; pulling tankers and you multiply the degree of difficulty by 100. 99% of our trailers don’t have baffles, so you’re experiencing the full surge of the liquids pretty much every time you go out.. The only trailers we have that qualify as ‘baffled’ are our compartmental trailers. The over-the-road training period is only two weeks, which I think is much too short.. As excellent as Schneider’s training is, I just don’t think that two weeks is enough time to adequately prepare the new driver to handle the many nuances of pulling tankers safely.

Schneider is a great company to begin and finish your career with.... the training is first-class, equipment is well-maintained, drivers are treated great, the OCs are plentiful and feature showers, laundry, and most have cafés. If you do end up in the tanker division you’ll find no better instruction for offloading chemical liquids safely and with the best equipment. However, I urge you to consider starting out in their dry-van division; give it 6 mos. - 1 year. First learn to drive a big truck; once comfortable with it, then consider the tanker division. It will still be there, and moving from one division to another is pretty easy. This will also provide you the opportunity to speak with bulk/tanker drivers. You will see them at some of the OCs; ask them about their pay. Find out if the money is worth switching divisions.

I know you’ve got some time before you start CDL school; I hope you take this post into consideration. Best of luck to you with your decisions. I look forward to reading about your progress throughout all this. If you do become a Schneider driver, I sincerely hope our paths will cross... coffee’s on me.

The TruckingTruth Meet Up Thread

A negative about being local is you can't do these meet-ups anymore. I miss you everyday Old School!

Do you still run local out of Sacramento?

Following up on what PJ asks, are you presently a truck driver, or are you new to this lifestyle? I’m asking because I know that Schneider Is not currently accepting new drivers into their bulk (tanker) training program; they’re accepting experienced drivers only.

I should add that most of the regs were written before comp shoes became prevalent., and that “steel toes” have become part of the lexicon when referring to safety shoes. People ask, ‘ Do you have steel toes?’ rather than ‘are you wearing safety shoes?’ For the purpose of keeping your feet safe, in this line of work your comp shoes are more than adequate.

Timothy, those boots will be fine. Most of the notices at Schneider and the facilities we enter list as part of the minimum PPE steel toe footwear, but for practical purposes your comp toe boots will suffice. I also wouldn’t draw attention to the fact that they’re comp toe; if asked if you’re wearing steel toe boots, just say “yes.”

I heard a rumor once that she might have a website where she sells stuff, if you can find it. You have to know someone who knows someone… It’s somewhere on The Dark Web... gimp suits, whips, masks, that sort of thing. It’s all alleged and unconfirmed.

Get This Monkey Off My Back!

I met a lady driver about 2 1/2 years ago who kept a potbellied pig on her truck; she too used a ramp. I suppose that’s the only way that animal is going to get into the truck. I wonder if it was the same pair? Seems too much of a coincidence for it not to be.

I had exact same scenario, minus the morphine. Having visited the ER, everything that happened in the ER will have been recorded and can be found in the ER notes. These notes can be requested by your trucker friend from the medical records department of that hospital. He will want to get these. They will show where the doctor or nurse administered morphine.

Ever had one of those days?

The real crime here appears to be that guy’s choice of Ferrari; of all the Ferraris out there, he chose that one? What is that, a hatchback? That thing needed to be crushed.

Great news Scott! Congratulations on your reductions in weight, A1C, and BMI. I know that couldn’t have been easy. Really looking forward to another post, announcing your return into a truck! Awesome job.

I'm starting a new thread dealing with idiotic, preventable things you may have seen occur at truck stops, rest areas, or shippers/receivers.

Backing fiascos, stand-offs, loads that shifted, bridges that were too low (or trucks that were too tall), etc. G-Town constantly stresses, "Watch Your Wagon!", and I always say, "Don't make it onto the TV news."

I will start with this backing fiasco from last week. This was in Texas at a truck stop. The culprit was attempting to back in, got his setup wrong, and clobbered this poor guy hard when then the trailer swung around. The victim was parked, taking a break when this went down. He was towed away after dark. 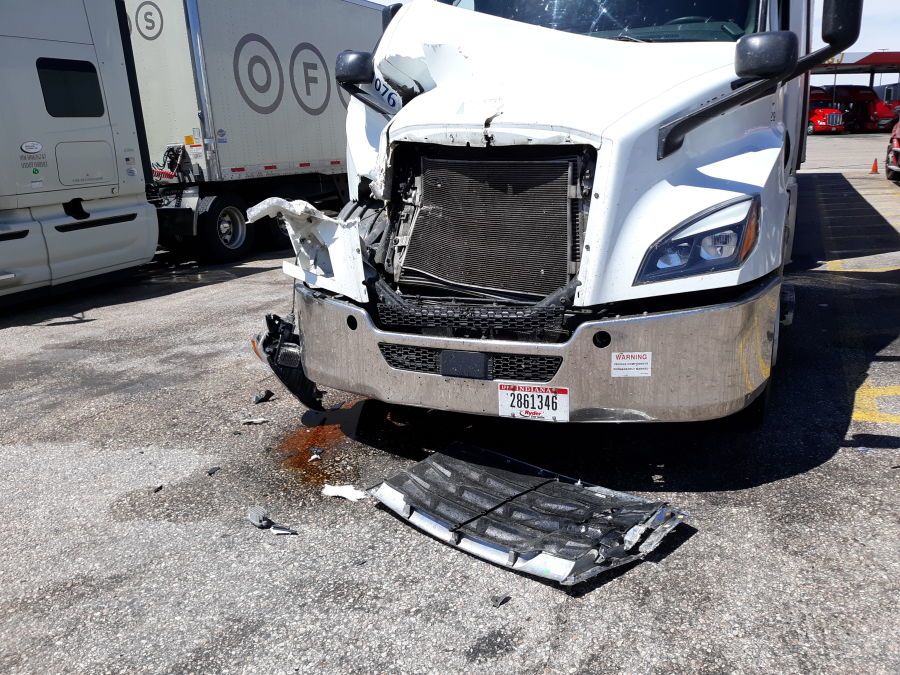 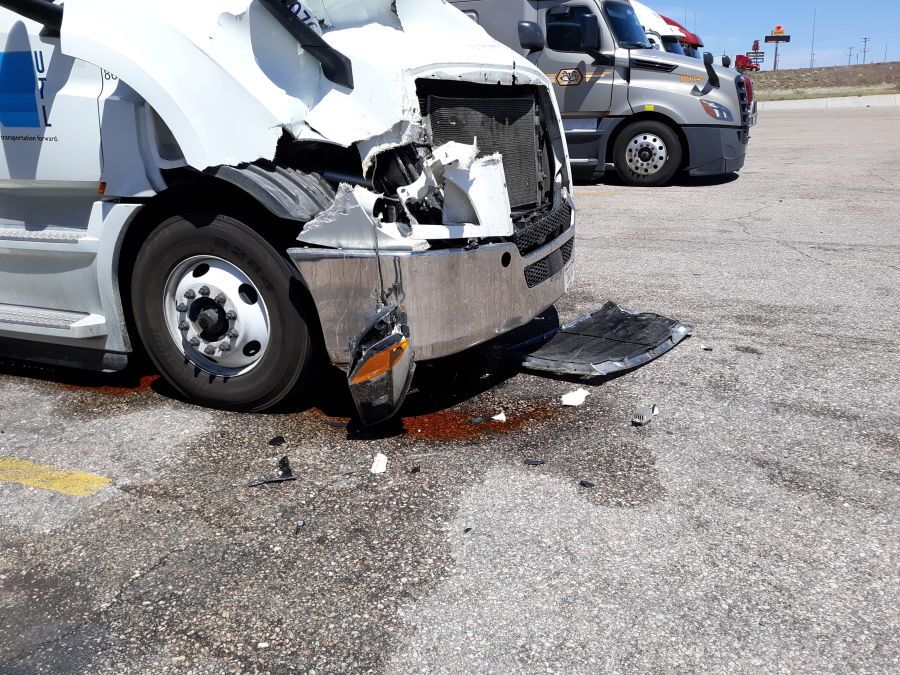 That amount of damage just amazes me; I don’t back up with near enough speed or momentum to cause that much destruction.

Yeah, I was very surprised to see him get so close to me; I thought maybe there was a nest nearby, but then saw him picking at and eating something white on the ground. I can’t imagine what it was, because the customer manufactures cardboard. He also appeared to be young... probably hadn’t developed a wariness of the humans yet. When he walked his body pitched forward; you can really tell how well they’ve adapted to running. Very streamlined. 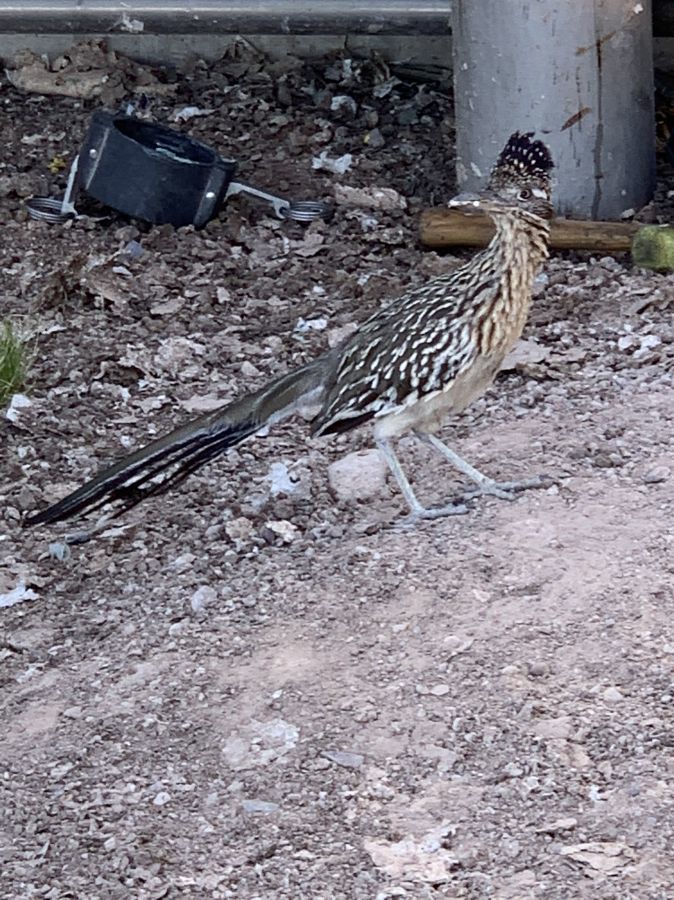 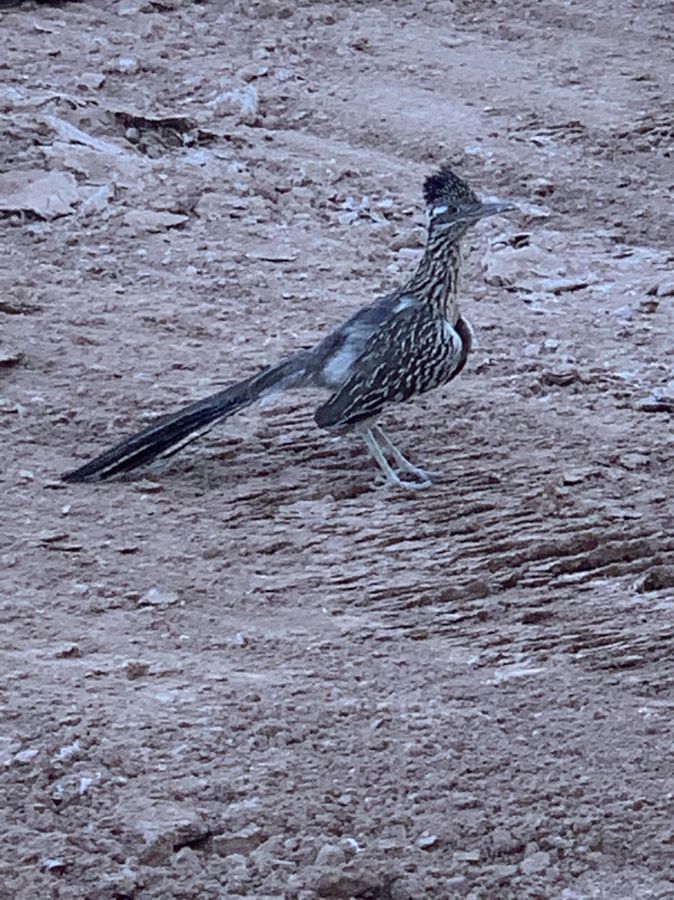 And here’s a video clip of him NOT RUNNING!

This little fella paid me a visit while I was offloading earlier this afternoon; allowed me to get within several feet of it... 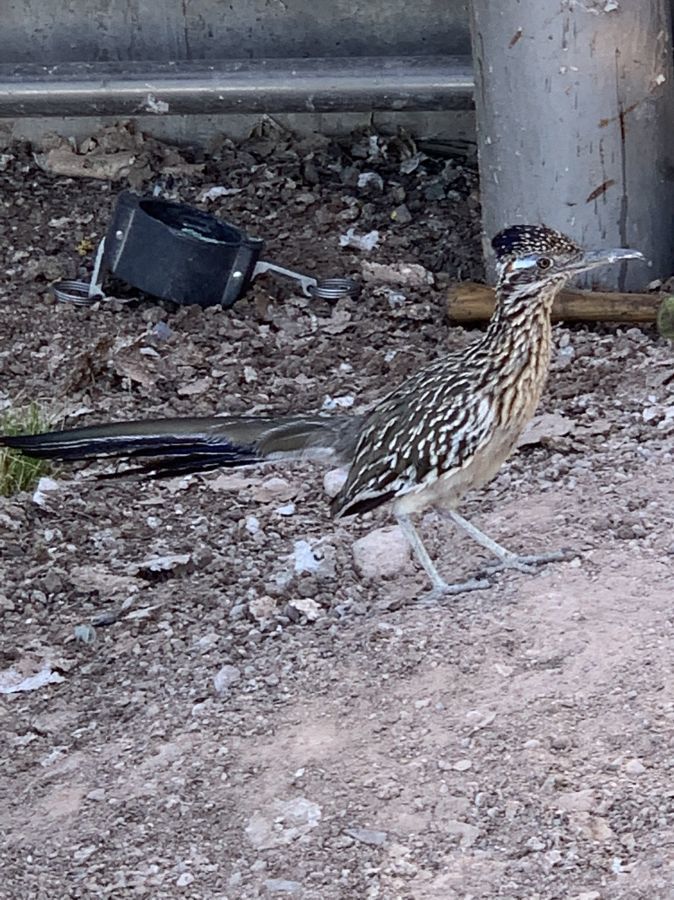