Until recently, I had never actually been on Donner's Pass in California. Donners Pass is usually touted as one of the more dangerous areas for truck drivers and is the site of many fatal accidents. It's quite an experience! I had the pleasure of going through it at night. I would have liked to take it during the day so I could see some of the scenery around me, but I'm sure I'll get that chance in the future. I was still able to make some key observations though... 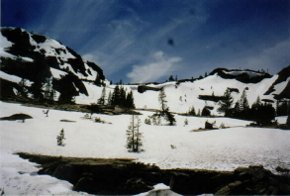 First, it wasn't as bad as I thought. I think it was just hyped up so much that I was expecting something more dramatic. Don't get me wrong, the brakes on my truck definitely had a workout and the palms of my hands were slightly moist afterwards, but it certainly wasn't what I expected.

Second, I didn't expect all the traffic! When I thought of Donners Pass, I thought about a lightly used portion of the expressway. Boy did I have that wrong. Being a Sunday night, I got all the 4-wheelers coming back from a weekend in Reno, NV. Traffic was moving, but it was bumper to bumper during the entire ordeal. The CB definitely helped out in one situation. I was coming down one of the steep declines and somebody on the CB indicated there was a wrecked 4-wheeler ahead and traffic was coming to a stop. Sure enough, on the decline and right around a turn it was nothing but solid brake lights. The idiot trucker behind me obviously didn't have the CB on. The truck ahead of me and myself slowed down since we knew what was ahead. The moron behind me was right on my butt, probably all upset we were going so slow. Being the super trucker that he is, he wanted to go faster down the decline. Needless to say, I was nearly rear ended by that truck when we had to mash on the brakes and come to a dead stop on a 6% grade. Maybe he'll think about leaving some more space next time. The backup didn't last long thankfully.

One last observation is the lack of parking in the area! I had checked earlier in the day what the parking situation was like, and I knew it wasn't going to be good. But there are 2 rest areas through there and I was coming through about 7pm local time. I figured I'd just grab a spot at one of the rest areas and if all else fails, hit up the 49er truck stop at exit 85. Both rest areas were SLAM full. I probably should have just parked in the "brake check" area like many other people were doing, but I really don't like parking on the side of the road like that. Thankfully, I was able to get one of the last remaining parking spaces at the 49er truck stop. Too bad it cost me 12 bucks to park there overnight. Let the2010 tax deductions begin!

The next day, I had to head east back over Donners Pass. This time was a little more interesting as it was snowing over the pass. It wasn't too bad, but enough to make the roads slick and reduce visibility. I got behind oneparticulartruck that was driving especially slow. I stayed behind him for a bit before I decided to go for the pass. After I passed him, the driver called me up on the CB. He stated his wipers weren't working and he couldn't see very well then asked if I could slow up so he could follow my lead. Helping out this driver gave me a good excuse to drive slow down the snowy mountain and that driver was very gracious for the help.

So after a full year of driving, I'm still experiencing things for the first time. It's a never ending adventure out here, and I'm glad I have finallyconqueredDonners Pass!

You never know when a beautiful day for a drive can suddenly turn ugly, as it did for Rhonda in her big rig on a typical summer day in Wisconsin.

My First Solo Run Went Better Than I Expected

My first ever solo run as a trucker went pretty well, but of course I ran into several issues and learned some good lessons right off the bat.

Nothing could be more exciting than climbing behind the wheel of a rig for your first run ever as a professional driver! Here's how it went for me.