During the last couple years, I've learned that all truck drivers tend to be referred to as "professional" truck drivers. Most are indeed professionals, but unfortunately, this isn't always the case. The fact that somebody drives a truck for a living does not make them professional. What I'm about to say here is almost entirely opinion based, but I challenge anybody to argue differently.

What is a Truck Driver?

A truck driver is somebody with unique skills. They can back into spaces most drivers couldn't back their SUV into. They can maneuver a warehouse on wheels through city traffic and around drivers who drive as if they have a death wish. They drive on roads that were designed for a horse and buggy. They get cut off, flipped off, yelled at, and taken advantage of by other drivers at, usually at no fault of their own. Truckers are truly unique individuals with truly unique abilities to handle a large vehicle while dealing with a tremendous amount of stress. But does that make them professional? Not exactly.

What is a Professional Truck Driver? 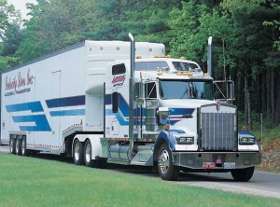 Often times, I see truck drivers who are simply 4-wheelers driving a truck. They have big egos. They feel like they must prove something by tailgating, blocking cars or trucks from merging or changing lanes, flipping their middle fingers, yelling on the CB radio, speeding, tailgating, not using their turn signal, and other things you'd expect from people who are not professional in their driving, or in the mannerisms. These might be truck drivers, and heck, they might even have millions of safe miles under their belts. But it doesn't make them professional.

We all have our moments out there on the roadways when we just can't take anymore. But a true professional driver leaves his or her ego at home. They don't try to teach people a lesson. They don't try to let somebody know when they've done something wrong by tailgating, honking, or blocking the flow of traffic.

When truck drivers have this mentality, they can't help but to be safer drivers. A driver who remains calm and drives using their head instead of their emotions will almost always come out on top. Sure, you might let a few jerks "win" by allowing them to cut into traffic or make stupid moves. But who cares? That's what being professional is all about. Doing what is safe, even if it doesn't seem right or fair. Everyday truck drivers see plenty of stupidity on the roads. That's because most drivers aren't professionals. As truck drivers, it's part of our job to be professional and protect the public. Only allowing people to makemaneuverswhen it's "fair for everyone" is a childish and unprofessional mentality.

Be a Happier Driver

Expect unprofessional drivers will do dumb things. Try to predict when a driver is going to do something stupid, and take action before it happens by leaving enough space so they can make their stupid move. Leave your ego at home and never drive with your emotions. I guarantee if you do these things, you'll be a much happier driver and will suffer far less stress. I also guarantee that being a professional driver will not waste much, if any, of your precious time.

As a professional, you have enough on your plate trying to drive your own vehicle. Let the unprofessionals drive theirs and simply adjust to them. You aren't going to teach them a thing, and will only succeed in increasing your own stress level by trying to do so.

So relax. And of course, drive safely!

From The Driver's Seat

I've seen a lot in my 10 years on the road. Some of my favorite memories are of the little things.

What's A Desert Dude Doing Driving In A Blizzard?

I live in the desert. Blowing sand is common, and we have days when roads are closed due to blowing sand, but not snow! Oh man, here comes a blizzard!

Trucking Safety: What Exactly Is The Golden Rule?

Trucking driving safety is the most important aspect of life on the road, and safety can be boiled down to one golden rule - let's see what it is.

For rookie truck drivers, time management skills are critically important to making good money and being safe out there. Here are some important tips.

Over The Road Challenges

Truckers face a litany of challenges on the road every day and new drivers often learn about them the hard way. Here's a few of the big ones you'll see.