I live in Ohio, I am an Associate Pastor and I love Chicken

The first time I got shocked. I would probably. Hand it back to you, throw water on your u and make it go off.....

In reality no electrical shock would not work. Shocking someone can lead to stroke, heart attack, asthma attack...etc.

If it worries you that much stop smoking pot

Hauled a load for Nintendo...hope the pics work 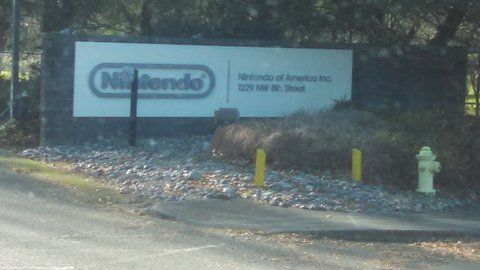 So the past couple of months iv had a strong interest in becoming a truck driver and iv been studying as I should as well as finding a company such as Pam transport to start off with for their training and gaining the experience il need in the long run,yet i have no idea how to drive a manual. I have no experience what so ever in driving with a stick shift and using the clutch. Does anyone have any suggestions,tips or link any info that may help?

So I was driving westbout on I 80 yesterday and got through the storm. Stopped in Cheyenne for a minute and there were some people shutting down I think from the eastbound closure. Made it through to Rawlins to stop for the night and now everything is frozen.

Gotta make it to salt lake city by 4pm and have about 330 miles to make. Hoping I'll make it in time but I don't feel safe driving when it's dark in these conditions.

Sure was scary though. My windshield kept freezing up along with my wipers . That combined with the already low visibility and wind scared the crap outta me. Saw one rolled over Werner truck, and hope the driver is ok.

If I stopped in Cheyenne any longer I feel like I would of been stuck there. And sure enough road conditions are closed. I was going about 25mph down on that Lincoln monument and got passed by trucks going at least 60. Scary times, I'm sure it won't be the last scare out here just the first.

Feel pretty good about getting out of Cheyenne though once I got near rawlins the elevation dropped and everything cleared up.

Someone told me to use rubbing alcohol on windshield wiper blades to stop them from freezing but I'm sure we are not allowed to have alcohol on the trucks. Anyone have any reccomendations? Like using heat on them or something similar? Had to pull over 3 times in an hour to knock the ice off of them.

I keep a bottle of deicer in my car, its base is alcohol. But I do not know about regs with rubbing alcohol in a semi.

Also be careful! I will be praying for your safety there

Happy Turkey Day OS!!! Enjoy your family that is what working hard is for so we can provide for those we love

Bungy cords can be dangers

My son, a carpenter had a cut on hand, got infected with a red streak on hand, got the antibiotics and Drs cleaned it. Thank God it healed. I'm glad you pointed out that this could have been much, much worse.

That's blood poisoning. I got bit by my cat and that's what happened to me, when I was in junior high. I was in the hospital FIVE days.

Sounds like these might be 2 different things?- My son's infected hand (maybe blood poisoning), and murderspoly's rot (gangrene).

I'm not trying to be sickening. Maybe multiple things are going on at once in muderspoly's situation.

Jetguy's was blood poison, and murders was MRSA a bad type of staph infection that literally can eat the bone. Not gangreane.

If anyone gets a cut, even a small cut it is good to have alcohol or peroxide around so it doesn't start an infection. I always keep a bottle of alcohol and a tube of triple antibiotic ointment on hand. I used to work for a foot doctor and you cannot believe the stuff I have seen that just started as a small cut that barely broke the skin

Robert B, that's probably right. I didn't want to hand type the whole message, but it's OK to buy anti-gel with your ComData card.

I personally probably will not have this privilege since I have a regional account that stays Ohio and South.

So far in Ohio its been decent weather if not strange...but like they say in this region if you don't like the weather wait five minutes it will change

Where have all the Professional Truckers gone?

Beyond that it becomes the responsibility of the trainer/mentor during road-training to demonstrate and teach the finer details of being a professional trucker to the trainee. This is perhaps where the process needs improvement and there is clearly inconsistencies. Good trainers usually produce good truck drivers capable of at least standing on their own two feet, able to assume the responsibility of furthering their own professional development. Bad trainers, it's a crap shoot and unfortunately there are still bad trainers teaching bad habits and dangerous practices. Good trainers/mentors, no doubt more are needed.

Best answer. Its like college, they teach you enough to pass a test. But your real training is being trained by an individual.

Marijuana as a medical necessity is one thing. People with cancer, als, and other forms of debilitating, painful diseases have shown progress while using marijuana medically. With that being said you should not use it to just get high. And by no means be able to if you work at a job where you put other peoples lives at risk.. ie...transport, healthcare, heavy machinery operations

Either the worst or best truckers song of all time.

Best is Roll on 18 wheeler by Alabama

Most of the mobile satellite devices are pretty pricey. I think most people just use their phones as hotspots for internet since cell coverage is quite good with most major carriers. There are some threads on here just do a search for "cell phone". You can also find wifi at most truck stops.

That came from letf field???

Im shocked it took this long for politics to enter this discussion. Now we just need religion to weigh in and we can call it a day.

Did someone say they needed a Pastor!

Honestly you will get the same answer from all of the people. The best company is the company that fits you best. That is the honest truth. The difference will be in the minor details

Unions are a good thing. My wife works for a union and they take care of us. I work non-union and I am just a number, and as long as my number is cheap they are happy at the top. We only get at most a 5% raise every year, most of the time it is just a 3.5% raise. Let's do some math here I make 13.93hr if I get a 3.5% raise that means I will make 14.41hr. My wife on the other hand makes around 18hr within 3 years she will be making close to 40hr. The point I am making is a union will pay you a liveable wage, most non-union companies pay you the bare minimum that they can pay to fill the position

I actually play a game called euro truck simulator 2. I have a wheel and pedals. It helps me with backing.

I only have two but have decided on one.

I will end up doing the 7/7. I have children, wife and a church to think about. Might get a part time job for the off weeks

According to Schneider, the OH run is mostly night driving.