So yesterday morning I'm traveling south on I-85, mm 86 about 2 miles before Bill's truck stop. I got the cruise on 58 mph, traffic is real light, two cars on my left just passing me. I felt a thump, look out the mirror car in the Highway sort of spinning and car parts flying. I told my husband I think he just hit my trailer. I pulled over run to the back of my trailer glass all over my dot bumper. The car is about a half mile behind me, but it now off the road. I'm calling 911 my husband is going to see about the driver. . 911 asked if any injuries I said other driver has to be injured his car is destroyed. She said hold on other party is calling in he said no injuries. North Carolina state trooper was there in seconds. He stopped at car! I called my dispatch in seconds safety from PA called asked if I was okay, then safety from Springfield called. Finally the officer came to me. I'm like what happened? He said I call it distracted driving at a high rate of speed. What? Driver said he dropped something, reached for it and never saw my trailer till he hit it! By this time my nerves were getting the best of me, I was actually shaking! Trooper was like I want u to sit here till you calm down. I been over this all day yesterday and most of the night , trying to figure what I could have done different, what I could have done to have prevented this accident.

Post from another page! Next week begins a CVSA enforcement blitz with a focus on speeding and other dangerous driving behaviors. Last year, over 2000 CMVs were put out of service and MANY citations written. 2020 saw a significant increase in fatalities, with speed the dominant factor, and states lost a TON of revenue when no one was driving, so expect AGGRESSIVE enforcement efforts. NOW is the time to: Use your cruise control! Stop before crossing state lines to walk around your truck and be sure everything is as it should be. Do NOT accept a "warning"---it is a CONVICTION, and cannot be contested in court. Instead, respectfully request a citation and court date. Your CDL is your livelihood, and points on your MVR can make you uninsurable, and so unemployable. If you get snagged, or want to protect your CDL proactively, I can help. Be safe out there!

Well my day is off to a rough start

I've always struggled when there were no lines. Sometimes you can use the cuts in the cement. Sometimes you just have to get out see what angle the trailer is so you know how to straighten. I will look for a point in front of me a trash can, a car anything directly in front to aim for and center my truck for that point!

Let me see if I understand... 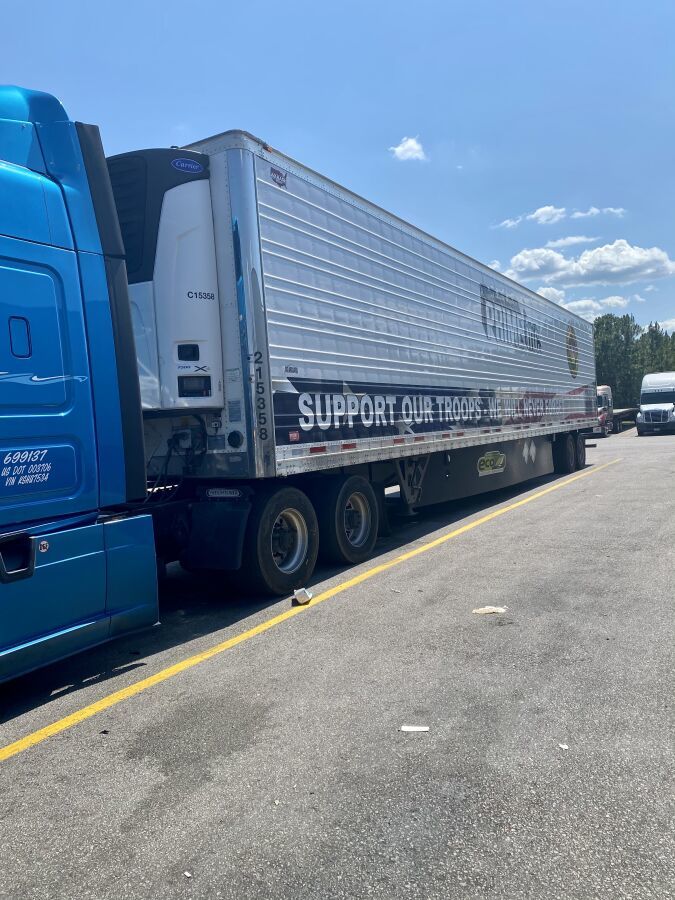 Geez what a first week! Sounds like you have more than one problem, you aren't watching your mirrors! You didn't SEE your trailer slamming into the back of your truck, you didn't SEE your trailer hitting another trailer! There are plenty of places u can't swing wide enough in one movement. You'll have to stop and readjust for space u have. If u don't learn to watch your mirrors u will continue to hit things!

It only took Kearsey about 10 minutes after my post to call me and get my thinking straight. I've just been thinking about a new truck, getting out of a light weight! These guys offer brand new trucks with all the bells and whistles and .60 cpm. However if I figure my bonuses I make way better than that plus I get a good bit of extra pay, a gift from from my fm, i guess never questioned it! I can't see, changing fm I don't believe prime would be the same under a different fm. I think like a company driver more miles more money! O/o think less miles on the truck more money on the load. That would be a problem. And as Kearsey said we're company drivers, believe it not we're not use to being micromanaged. I receive a load run it the way I want as long as I make the appointment, then receive another. Very little interaction with fm. I may be a little to forward....or outspoken to deal with a middleman.

I've been asked several times in the last months about driving for o/o ? I would still be a company driver. Can anyone tell me how this works and the pros and cons?

You're traveling at the speed of light! Your logs look so totally different than mine.

Weighing at scale and sliding tandems

So I'll ask the obvious question! Have u been asking the same question on here for 5 years?

Do u have a drivers license? If so, you can drive anything that doesn't require a cdl!

How does the 7/3 or 8/2 work when passing the midnight recap? Couple days ago I drove 8 hours and 40 minutes , so I had 2 hours and 20 left on my clock. I'm 2 hours from delivery and figured I'd get the 3 hours on the unload. After 7 hours in sleeper I've got 5:30 in hours. It's got something to do with the midnight recap even tho my recap was 9:5.

Texas CDL my 16 YO teen had an injury free accident.

I'm sure it will effect your insurance especially if u didn't have coverage for a under 17 driver.

Would i get in trouble for this?

Thanks for the replies everyone. I just got a message from my DM saying that requested a re schedule so I'll still be able to deliver the load.

A reschedule! Which means u will probably sit on the load for 2 days!

Dry van ...OR Conestoga? Your thoughts?

I've always wondered about the onions! Guess that would make a real stinky reefer. When I started running reefer I thought it would be only food products but I've run some odd stuff in a reefer. I've carried Michelin tires, bicycles, wagons, exercise equipment, cooking oil, insulation, even potting soil. I've carried several loads of apparel for Bloomingdales. Children wear for Carter's, and a load of Hanes underwear. I've learned if it will fit they will ship.

Dan, sorry it didn't work out. I'm sure at this point you're just ready to get home. Perhaps u could share with us what u didn't like, so maybe other readers will more understand that trucking is a new lifestyle not just a job. Best of luck.

Now I'm curious what state does one have the right away to turn left on a solid green light, with out yielding to on coming traffic.?

I feel for u! My fm sent me the ppl with the floral, I sent back never done a floral, but u know I’m to old to be unloading flowers! He said oh I won’t put u on one with multi stops! I’d play any card to get out that mess!