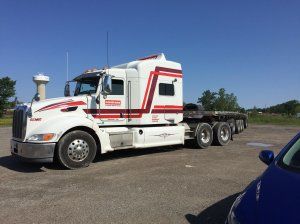 After driving for my first company about 20 months I found a new one in the same town I live in. The move will save me about 6 hrs weekend time and lots of gas money. I can ride my bicycle to the yard. This company is only 10 trucks so quite a bit smaller and not as much maintenance support but they do seem to stay on top of things. The biggest change is they mainly haul to the USA and previously I had only hauled in Canada, mostly in Ontario and a few times to Quebec. I had previously hauled heavy with the truck licensed for 132,000 and am looking forward to now driving half empty lol, the difference being the variety of loads I will now have. So far I have had 2 trips to Wisconson and one to Pennsilvania all with reloads. Getting used to the different speed signs and the location of truck stops has been trying. My Garmin was set to avoid tolls but it would also try to avoid going over the bridges at the border and so I have had some interesting rerouting going on which has cost a few hours to say the least. It was iteresting reading another post on flatbedding here because I just finished a load of well casing, I had hauled square tube and I-beams, coils, slabs, billets and angle iron but that round well casing was as scary as anything. I put more straps and fed belly straps and still it moved, I guess thats why they use stakes. I have never tightend straps as much as this load and stopped as often to check them. On the other hand I also had my first load of insulation board. Stacked to the rafters so throwing straps was a good workout but then what? I never put a twist in them and I think the vibration caused them to compress the material and loosen so I climbed up on top at a stop and repositioned the corners then added some twist. I usually have had a pole to do this with but conveiently left it at home in the garage, its in the truck now. Anyhow looking forward to seeing more of the USA.

One thing I forgot to mention is my old company used peoplenet the new one uses qualcom. They arent the same thats for sure and the only person who seemes to know how to work it is the girl friend of one of the other drivers. Hopefully I’ll nail it down before I get into a transmit logs situation.