I was wondering what the difference in types of pay are. I've heard terms like "zip code" pay, actual pay, hub pay, stop pay, breakdown pay, etc. I haven't gotten a lot of details about it yet though. Can you guys elaborate on it for me and tell me what I should be asking about? 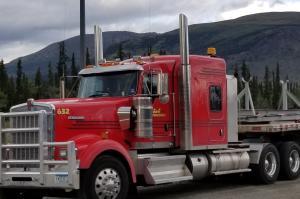 I was wondering what the difference in types of pay are. I've heard terms like "zip code" pay, actual pay, hub pay, stop pay, breakdown pay, etc. I haven't gotten a lot of details about it yet though. Can you guys elaborate on it for me and tell me what I should be asking about?

There are a lot of pays out here... never heard of zip code pay but i'll break em down to best of my abbilities.

CPM - Cents per Mile, generally what all drivers are paid. The miles you roll X .cpm = what you make.

Breakdown - Every company is different on this, but after x amount of hours (usually 24hrs), you are paid either by the hour or a flatt rate per/day.

Layover - As with breakdown, after sitting waiting for a load you get paid x amount after a certain amount of hours. (usually 24hrs)

Detention pay - After sitting at a customer's facilities for X amount of time, you get paid x amount per hour. Most of the time its after 2hrs of appointment time you get paid XX/hr. so if you appt is at 7am, they don't finish unloading you untill 12pm, thats 5hrs. first 2hrs doesnt count so you get paid for the 3hrs.

Stop Pay - if your load has multiple stops, either pick up or delivery's, your company will pay you for the addition stop.

Border Crossing - Some companies that go into Mexico and Canada will pay X amount for crossing the boarder. (must have Passport)

Canada Miles - not sure on other companies, but I get a .4CPM for every loaded canada mile i drive. nice bonus i guess.

Hazmat - Some companies will pay you extra for hauling hazmat loads. (pay is anywhere from .01cmp - .05cpm)

Load/Unload - Payed for loading or unloading a trailer. I don't often hear of anyone doing this. But it can/does happen.

Theres probably more but thats what I get with GTI. Below is what they have as "Extra" pay

At my company we get similar compensation, some others:

Drop/Hook Hand Unload, $ per stop, plus a per piece rate (don't remember what it is) Safe Miles Bonus Fuel Bonus (scales up the better mileage you get) Layover/Breakdown $ per day - also pay motel if you can't be in truck during breakdown Tuition Bonus - payback for your CDL school Recruiting Bonus Vacation Pay Dispatch Pay - If you do something special for dispatch, like ontime delivery of a hot load or extra compensation for a difficult load. Local - If you do a local run while waiting for an OTR load

Truck Driver Salary
Click on any of the buttons above to view topics with that tag, or you can view a list of all forum tags here.