That is awesome!!! Glad you have a good trainer (it would be a mess spending 2 days with a bad one :) ) and gotten that many miles!! Look forward to hearing from you again.

Well, training is finally over! I'll be getting a truck on Monday. So for an update on the last few days.

Technically my training was scheduled to be over the Wednesday before Thanksgiving day. On Monday we ended up near our Ohio terminal so we headed over there to see if I could go ahead and get my own truck. Unfortunately this terminal is not much more than a drop yard and they had no truck available. There was another trainer there who had been sitting for several days due to an injury that prevented him from driving. So the company was trying to figure out how to get him and his stuff closer to home, which is not far from our main terminal in Tulsa. So to fix two problems they had me drive him and his truck back to Tulsa where he can get home and I can get a truck. No complaints from me because I am likelier to get a better truck here than at another terminal. So they've put me up in a hotel till Monday and I'm still getting student pay. That may sound bad, but if they had switched me over to driver pay(by the mile) I would be sitting with no pay, so it works out in my favor.

I'm sure some of you may be wondering about mileage. During the 21 days that count towards my training I ran 7,479 miles. Company policy is that the trainee has to run 70% of the time minimum. I ran 100% of the miles. At $.41/ mile that comes out to $3,066.39. Not bad for 21 days. During this time due to delivery dates we had two 34 hour resets. Most days we drove 7-9 hours. From what I have heard this is somewhat average getting into this time of year due to weather and such. Most of our time was spent in the southeast, but talking to other drivers and trainees others spent a good bit of time up northeast and northwest.

So far I really like this company and they seem to take good care of their drivers. The equipment is kept up better than most places I've seen. Not sure what truck I'll be getting, but hoping for a T680. Most of the T660's are being phased out so even if I get one it shouldn't be for long. All the trucks come with a 1500w inverter and APU and the 680's have refrigerators. There are a few Freightliners in the fleet, mostly for trainers since they have a little more room.

Any questions just let me know, I will answer the best I can.

That sounds great!!! Are you just staying in the truck until Monday? with student pay?

When will your insurance kick in, if you are getting it with your job? I did not know if fridge came on the truck or not. Let us know when you get your truck and all about it, mattresses, fridge etc.

Glad to know it is still going so well. And this is supposed to be the worst part right ? :)

That sounds great!!! Are you just staying in the truck until Monday? with student pay?

When will your insurance kick in, if you are getting it with your job? I did not know if fridge came on the truck or not. Let us know when you get your truck and all about it, mattresses, fridge etc.

Glad to know it is still going so well. And this is supposed to be the worst part right ? :)

No they have me in a hotel till I get my truck. Was hoping today, but they are really backed up with the holiday so it'll be tomorrow. Melton has one of the best medical and dental insurance policies I've ever had outside the military. It'll kick in mid-January. Just to give you an example with my last company insurance it was going to cost me near about $800 for my dentist to do a deep cleaning, with Melton I will get it free.

Soon as I get my truck I'll post the details. Really hoping for a T680.

Finally getting a chance to update a bit. So they put me in a 2015 KW T680, really nice truck. Just need to get home to get all my stuff set up in it. Decided to way until the week of Christmas to go home. I'll have enough time I can take a week off so that'll be nice. I'm on my second run since I got the truck, both over 700 miles. So for I'll be getting paid for over 1400 miles. It's actually closer to 1500 and I haven't put in a full week yet. First load took me to Kentucky and this one is going to Minnesota.

I'll try again when I get better net service. The WiFi here apparently doesn't like to pull up photo sharing type sites. Or anything else beyond basic text. 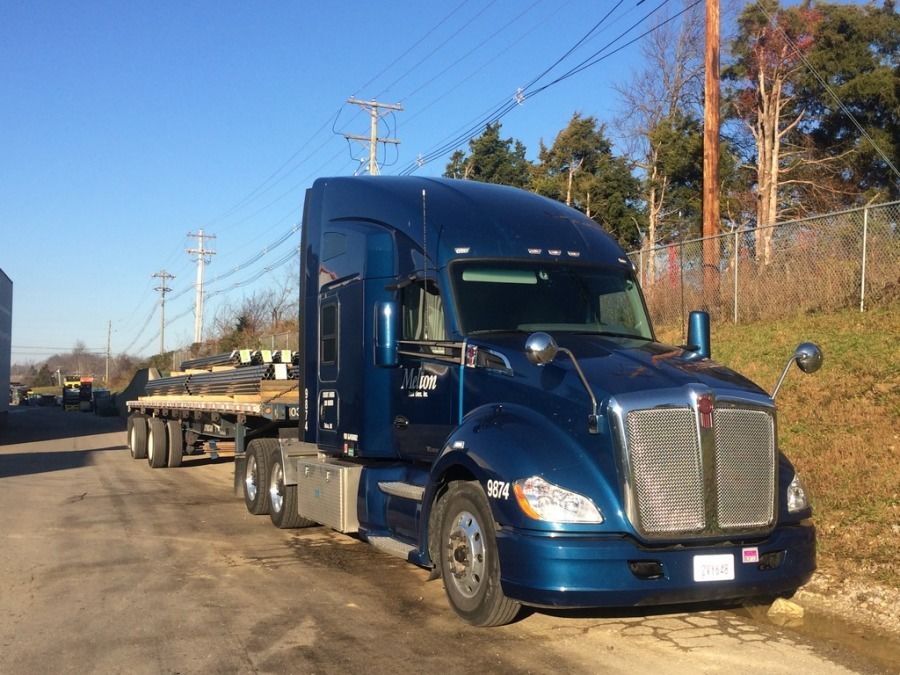 Thought I'd drop in for a quick update. I'm now I'm the middle of my third week solo, second full week. Things are going great so far. I've had the chance to see some pretty cool sites and make money traveling, so no complaints here. I'll post some pics when I get home this weekend. Mileage so far: 5,660. (Once I complete delivery of current load Friday morning.) And my DM is apologizing for it being so slow. That comes out to $2320 just for mileage. It's a bit higher with tarp pay/ detention pay/ and extra stop pay. Oh and $75 for going into DC. All of that will be up around $250 or so. Would have to look it up to be sure.

And a shout out to SamTon. Met him and his wife today and enjoyed a good homemade burger. Real nice folks, look forward to seeing them on the road next year.

The primary person a driver communicates with at his/her company. A dispatcher can play many roles, depending on the company's structure. Dispatchers may assign freight, file requests for home time, relay messages between the driver and management, inform customer service of any delays, change appointment times, and report information to the load planners.
SamTon's Comment

Aww.. I am glad we got to meet you too!! Sam was like a kid... he is so excited to do this! I thought afterwards, once we get on the road we may not see you that much but how cool that we got to meet. Thanks for giving us a peek into the trucking world. Now on to organizing and planning on how we will cook in that thing :)

Look forward to hearing more about your adventures . Be safe out there!

Their trip planning was pretty neat and they have you plan it out like you were taking that load; with your 10 break too. 50mph for rate of speed divided by your trip miles gives you how many hours it will take altogether. We did one on the last day I was there at the Tulsa terminal that went from Lake city, Florida to Seattle, Washington.

Tomorrow more load securement, tarping, and driving for those that need a little work.

Melton Becoming A Truck Driver CDL Training Cooking In The Truck First Truck Driving Job Flatbed
Click on any of the buttons above to view topics with that tag, or you can view a list of all forum tags here.