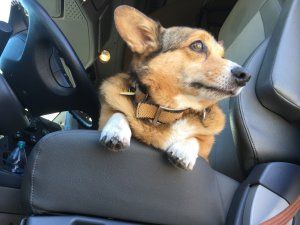 For the past 11 weeks Buster and I have been tooling around the US and Canada in a 2013 Freightliner Cascadia 13 speed. We live in the truck and I had it all set up nice and pretty and some custom furniture so the Corgi could go from the passenger seat to the bunk without having to jump (for those unfamiliar with Corgis think small German Shepard with Dachshund legs). Loved our ride and life was pretty grand.

Those days are over, or at least significantly modified. They pulled me in Sunday to put us in an old T660! I feel like I've gone from a Lincoln to a Yugo. Last week I felt like I was driving a shiny new RV, now I'm having flashbacks to 25 years ago when I drove around the country living out of an old Ford Ranger. Although I think I had more space in the Ford.

Still, the most import thing is Buster still thinks he has enough room. He's not constantly banging his head. Guess we're off on a whole new set of compact adventures.

Hopefully it won't take me too long to get the hang of this 10 speed.

Oh man, that's a serious bummer. Downsizing is tough. Hopefully you won't be in that truck long if it's pretty old already.

This is all part of XPO's plan to "Maximize Asset Allocations", as it says on the posters plastered everywhere. They took all the old Freightliners from Truckload (OTR) and moved them to the LTL Division. I didn't understand why they didn't give the day shift guys the tiny trucks and leave the big comfy rigs to those of us that live in them until I arrived at the customer last night and tried to turn around in their lot. Strains of the Willis Brothers' "Give Me 40 Acres And I'll Turn This Rig Around" echoed in my head as I wrestled it back in line and searched for a section with a few trailers parked further back so I had that few more inches of clearance I apparently now need. I was officially told that XPO is buying new trucks next year and I'll be first in line. If I'm still here, that is. Only 7 months to fulfill my training contract. Who knows, maybe I'll get used to this once I get a chance to swing by my storage locker and offload the stuff I couldn't bring myself to just throw away.

For folks considering XPO/Con-way I should point out that the 4 guys that graduated from Crowder with me are all driving 2016 Volvo Automatics. I just tend to naturally have more Adventures than those around me.