Page 1 of 2 Next Page Go To Page:
Giggles's Comment

I was wonder what the "Touchless 5th wheel Release is all about.... 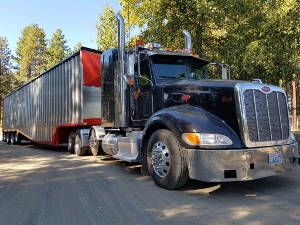 I've used them. Also known as "in-cab 5th wheel release", they can save a few seconds in a drop n hook operation, but much more importantly, they can save wear and tear on your shoulder. There's a safety feature that won't allow you to release the 5th wheel until the brakes are set, and you can also release the 5th wheel the conventional way if the in-cab control doesn't function. In the 3 years that I had one, I never had an issue with it. They're cool.

Our trucks have air assisted incab release. It's quite handy.

I agree, it's definitely a nice feature. I did have one truck briefly that sometimes had issues with it and I had to release it manually, but that was an old beat up truck and that was the least of its issues.

Thank you very much folks. I am researching Millis Transfer. It's been a long time since I have been behind the wheel!

I dont get any fancy tricks like that on my freightliner haha. Never thought pulling the release was that hard, maybe because I am young.. haha

I dont get any fancy tricks like that on my freightliner haha. Never thought pulling the release was that hard, maybe because I am young.. haha

Chances are pretty good you have that feature on that freightliner. Every truck I've been in, several freightliners, a couple of Pete's and a couple of kws, have had an in can fifth wheel release. The freightliners had a knob to pull. The petes and the kws had a switch you had to depress for 3 seconds.

It's not really hard to pull the release manually most of the time, but the angle you are pulling at does increase the risk of shoulder injury.