Update After A Year 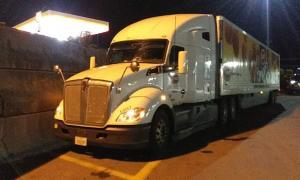 I appologize for not posting in a year after I finished with my schooling in Philly but the last year has been a little hetic and the mindset of 'Ill post later' had set in. I have finished the first year with my training company PAM Transport and currently am running walmart dedicated out of Smyrna DE and am on a 34 hour reset. after I had finished with school I wound up waiting 3 weeks for PA to send me my CDL via mail and wound up on my mentors truck 4 days after it arrived.

My mentor, a man whom had meen driving for 16 years and someone whom I got along with quiet well was the type whom helped and guided you but having you learn for yourself. he would have you figure it out but would be ready to help if you started floundering or yell for you to stop if you were going to hit something. The first week with him was solo with me driving and him sitting in the passengers seat making sure i didnt screw up and learning the basics. Second week was teaming style but still he came up and helped me when I needed it. The truck was one of the older ones in the fleet, a 16 international with a 10 speed, oh boy did my left leg hurt when it came to backing practice in our yards.

I will skip over orientation as it involved the typical test drive and showing you can bend a truck into a parking spot along with company policies and safety stuff.

Onto the truck with a teammate, my teammate was someone whom I had spent 3 weeks in a hotel room with during training, so I had a decient grasp on whom I would be living with in a tiny rolling metal box (a 19 peterbilt 579 midroof). 6 months, we ran hard had a DM whom would have us preplanned atleast 24 hours in advance of arriving at a reciever. 6 months, Northern jerssey (still hate jersey city and Newark with a passion) to mid florida to sacramento to LA. I wound up becoming the night driver between the two of us because of my tendancy to be a night owl (I still perfer night driving)

After 5 months we had surpassed the reqired milage for teaming (as the reqirement of 60Kmiles or 6 months was in place when we joined the company) I went solo in january. One week after being solo I wound up on another dispatchers' board. Oh boy she loves her phone calls (Previous DM was almost entirely through quallcomm). Raan as hard as Icould and over the last 3 months Ihad wound up being the fill in for dedicated lanes when the driver took time off or needed to be filled untill a new driver for the lane was dropped into the spot. Good steady miles for those lanes and a fixed schedule and once I got used to them I got into a routiene, stop at the same locations for a 30 minute break or a 10 hour break or a 34 if needed. Druing the forst couple of months of being solo I made mistakes. Preventables if Ihad taken the time to properly look. First one I rubbed my trailer against a parked truck while trying to drop the trailer (GOAL and walk all the way around the truck Iwas in a rush and Iburned myself for it). The second one was in a truck I had recovered (The first one had an exhaust leak off of hte downside of the turbo) dropping off a load of glass (live unload) Istupidly tried a 90 degree alley dock off the right side and was more focused on my convex mirror on that side, wound up hooking the left fendor mirror on some empty racks infront of the docks. again I screwed up.

Now I am on a dedicated account out of Smyrna DE wal-mart DC as I had stated at the beginning, Loving it sofar (I get my first pay for the dedicated wendsday night) Been to a couple of other DCs and ran loads out of them more than Smyrna. Sofar, I have to say my backing skills are improving some of those walmart docks are difficult to get into and have passenger traffic to deal with as well and are tight sometimes.

I believe that this first year has tought me alot, but always much more to learn. To those of you getting ready to go to school, there are things out here on the road that will get you angry and impatient, calm down and think, that person that cut you off doesnt know better, that blindside dock around a corner, GOAL and ask for a spotter. That vetran driver that offers advice, atleast listen to what they say. You make the wrong turn and you have a 11 foot bridge infront of you, think things through on how to get off that road and back on route safely, even if you call the cops on yourself to have them guide you back out on the road you were on safely (Glad I havent had this happen to me yet).

So just a update of my last year (and a month or so more) All of you out there stay safe.

That's some great info you shared. The highs and lows of a first year, learning from your mistakes, and improving. Congratulations on getting to the one year mark! I wish you continued success in your dedicated role.