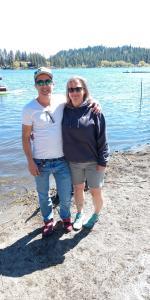 PakRat... Thanks man I made it. Now I gotta get to trucking. I was talking to friend that has been solo for the last two weeks. He talked about the stress he has endured in such a short time. I can only imagine that I'll experience the same thing but that things will get better with experience. Persevere, baby.

I had a two day break that wraps up tonight but they gave me my first 2 runs to make it home for the break. I hauled a load of beer from Payette, ID to Portland, OR then a home depot run from Salem, OR to Lewiston, ID. I live about a half hour from Lewiston in Washington State and I'm out in the middle of a bunch of rolling wheat fields so they let me take the truck and trailer home. Convenient and awesome. I already made some mistakes. Same mistakes that I've already read from others but I went ahead and made them anyway. I accidentally went off route in the Kennewick, WA area and into a residential area around midnight. I made it out without incident but I was sweating and praying. I passed my truck route in Lewiston but found a turnaround. I've been getting lucky and I'll take luck any day. Now the exciting part... I've been dispatched from Quincy, WA to Coxsackie, NY. Over 2,700 miles. WhoaTalk about a rookie run. It's right on the Hudson River and by satellite the area looks gorgeous so I'm excited to see upstate New York for the first time. I've planned it out and it's doable for me because it starts early tomorrow and ends late on the 28th at 23:30. Working for May means you are governed way lower than most, I'm at 61mph and so it just takes longer to get to places. Everybody passes May Trucking. On my break I was able to pick up a fridge and microwave and my dog, Bettie. She's a black German Shepherd and I love her so I hope this goes well for her. She travels well but she's never made it past the big D. I plan to buy some collapsible steps for her but haven't yet. I'm not sure when I'll actually be able to get my fridge and microwave set up. I'm gonna leave it to the pros in the shop. I'm rambling like a fool I know but I'm excited and nervous. Rookie nerves ya know. I'll probably stop in Post Falls, Idaho tomorrow or maybe Haugan, Montana. Next night, probably Billings, Montana followed by Bismarck, ND or just passed. Gee, this is my first time where I've really had to do some planning on my own. I better work on getting some sleep. I'll let you know how it goes. God bless y'all. Jojack

I run 60 mph most of the time. There's nothing wrong with getting passed all the time. To be honest with you, it's safer and less stressful than trying to figure out how to pass the guy ahead of you who is running about one mph slower than you.

Excellent point, Old School. Safety is always on my mind. I'm still not over how huge these trucks are. I had a real easy back into my dock... Thank the good Lord. I'm still at the dock waiting to be loaded. Hope you have a great day and until next time, safe travels. Jojack