Hey there TT. I have been reading tons of threads and watching videos. They've been interesting and informative to me so I'd like to document my experiences so it may be entertaining or informative to others.

I'll be updating this thread as I move through the process, so if you stumble on this after a few months/years keep reading!

So I've been working retail and retail Loss Prevention for 2 years now. Just turned 21. Tired of being on my feet all day and crap pay I've been looking for a change. Took a short trip from Wichita down to the OK/TX border and seeing all the trucks I started wondering what it takes to get into trucking. Turns out not a lot, and it's been moving a lot faster than expected.

About three weeks ago I started looking for OTR companies that would pay for a CDL out of my area since I'm a retail lackey and lacked the money or time off to pay my way through CDL school. Out of the few I applied for Roehl and Swift replied. Roehl sounded nice with the getting paid during CDL school and all, but after talking with the recruiter it didn't work out because of an at fault (fender bender) accident 2 years and 9 months ago, he said to call back after it had been 3 years. I really don't want to be a glorified door greeter for 3-4 more months so next to reply was Swift.

Application process was easy enough and they only cared about 2 years of history unless it was more than one or two things or a suspension/DUI. Great. Recruiter called the next day and was already scheduling my DOT physical. I also had to schedule a written test at the DMV which let me tell you, they're all booked out a month or more because they're appointment only right now due to the 'rona. But I called one in the sticks an hour out of Wichita and they got me in 2 weeks later. My recruiter set me up with a Swift online course to pass the permit test.

Went to the clinic to do the DOT Physical. Thought they were going to refer me to do a sleep study since I'm overweight but they didn't. (Would've been fun since they likely would've referred me to my mother, the only person who does sleep studies in that hospital chain...) Passed fine. Note that even though Swift doesn't have the clinic do a drug test, they still do a urinalysis for some health check. Whoops, peed before I left home. They just gave me a bunch of water and had me try again after the exam.

Passed the permit test with flying colors. PROTIP: After the Swift course and reading the manual I used an app (iOS) called CDL Test Prep 2020 (developer Tanh Hung) and did the practice test over and over until I got 100%. When I got to the DMV the test questions and answers were WORD FOR WORD THE SAME. Awesome. Also on Swift's online course don't watch the Truckers against Trafficking video. You'll have to sit through the whole 30 minute video again at the DMV.

Called my recruiter, paper permit in hand and she set me up to head to Kansas City just one week later. (July 1st, anyone else going?) They offered to get me a greyhound ticket but I've ridden a Greyhound before and I'm determined not to do that again. Besides, it's only a 3 hour drive and having your own car should be nice for getting out on the weekends/the evenings.

A day later got an email to review the Academy packet. First mistake, I did the DOT physical before the permit. The physical card said "No" next to "CDL Holder/Permit". Recruiter didn't catch that fact and I didn't know. My academy packet specifically said it had to say yes there. Just called up the clinic after I got my permit and the doctor re-signed it. Cost $16 but not a huge deal, trying to make this whole thing as trouble free as possible.

Also got a one night hotel voucher, with a promise for the rest of the stay to be covered on the first day of class. I've looked at the hotel and some reviews and I gotta say it sounds pretty sketchy. But due to COVID I get my own room at least, apparently that's not normal.

And that's pretty much where I am now. Heading out Tuesday, class starts early Wednesday morning. Stay tuned to see if I make it! I hope so since if I don't I'll owe Swift money for training and be out a job. 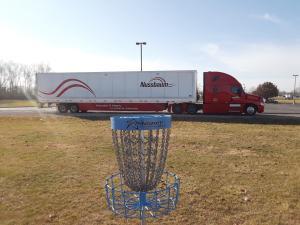 Guy B.
Indianapolis , IN
In CDL School
Posts: 15
Joined Us:
6 months ago

You couldn't have picked a better resource than this one, best of luck on your journey!

Update: The hotel, and day one.

Drove up to KC just fine. Got to the hotel and first thing someone asks for a ride to the gas station. Lots of tweakers here. Lovely. Checked into the hotel, staff was a bit short with me but did help. Despite the reviews and outside appearances the room was clean and in order. Though you can hear everything going on outside...

Paperwork said the shuttle was supposed to leave at 0630 and that grab and go breakfast was provided before then, but when I got to the ground floor at 0615 they were already piling into the shuttle van. "Breakfast" consisted of either two granola bars or two prepackaged muffins, so if you thought you could go cheap and live off of the provided "breakfast", you might want to reconsider.

There were 9 people headed to the academy. When I first got down there I didn't see or hear anything to do with Swift but I assumed that's what they were there for. But I really didn't know until we got there, should've asked lol but it all worked out. The shuttle is provided by the hotel so no logos or anything. Also remember when I said we get our own hotel rooms due to COVID? Well so much for social distancing because including the driver and one employee (I think?) there were 11 of us in a little Ford Transit, shoulder to shoulder.

Normally the academy is held at a local community college but I guess due to COVID that's closed, so we took a 40 minute ride in that little Transit back across the state line to Swift's Edwardsville terminal. We rode in complete silence. It's early, or maybe trucking just doesn't attract the social types; who knows? When we arrived I found that only three of us were there for our first day. The other 6 were at various stages out on the range. We three were directed upstairs to a classroom where a very pleasant trainer introduced herself. The day went very slowly. For the first 45 minutes or so we read some paperwork (that took 10 minutes to read, max) while the trainer was dealing with a few other students poking their head to talk to her. Just a packet with the academy rules and expectations and schedule and such.

Eventually, us three new guys got into another (thankfully not packed) van and the trainer drove us to a nearby clinic to do drug screening. It was standard urine and a hair test. One guy also had to do his DOT Physical, not sure why they sent him without that first. He ended up not passing the physical got sent home and it was down to just me and one other guy. Took a good 2 hours at the clinic, mostly just waiting. The trainer picked us up and took us back to class. It was 11 by this point so she stopped and got two pizzas for our lunch. The first day is the only day lunch is provided. But in the driver's lounge downstairs you can get some cold packaged sandwiches and drinks for very cheap (half off because of COVID and driver appreciation I think. 83¢ for a bottle of soda).

The rest of the day was spent initialing and signing forms, checking our physical cards, a very easy English language test on the computers and then just watching videos/PowerPoints until 4 when the hotel van came back.

I'll update again tomorrow or possibly just a wrap up when we finish the classroom portion, depends on how interesting things are.

Oh, and online in videos and posts I've heard Kansas City is one of the few that still trains in manuals. This is no longer the case. The Swift academy in Kansas City is now all automatic. If you come through here you will have a license restriction.

This is very helpful! I'm waiting to hear back from swift myself. Not sure if i'll do a diary post or not but I love reading about yours so it gives me some idea of what to expect.