Want To Learn Trucking But Have Some Questions.

I've always liked travel, being by myself and driving. I've had a rough three years, but I've decided to look into becoming a trucker. I'm a 30 year old woman and I have a lot of fears about traveling by myself. I live with my parents but want to help them live better. I don't have a family of my own. So, I'd like to ask y'all in this forum some questions about being on the road and a few other things I've wondered.

I live in Texas. There's many different cdl's from what I've seen. Whats the best one for a new driver? Whats the best way to earn the license? Through a company or taking a loan for college or grant?

I drive a standard corrola with 6 gears. How is a big rig different? Or will my experience with driving standard help me learn?

I'd like to know how safe it is for a woman to drive a big rig. What are some things you wished you knew to prepare for starting? What are some of the dangers?

How difficult is it to find where you need to be? I can find my way around but I rely on GPS for first time visits anywhere.

How stressful is the job? I prefer being by myself and do a better job working alone than with partners. Are you put on tight schedules?

And, I would like to know how the pay is. You don't have to give exact numbers but I know absolutely nothing about how trucking companies pay their employees. Is it by haul, mileage, etc?

I know its a lot of questions. I found a lot of technical information browsing the web but then I ended up here. I really peoples personal opinions. This is a really big thing for me and its a little daunting thinking about driving such big equipment but I can't shake the feeling that its what I really want to do. I would just like to learn a few things first.

Thank you for reading

I am kinda busy right now but will respond i. The morning. Try looking here:

These are some articles I wrote that may answer some of your questions. 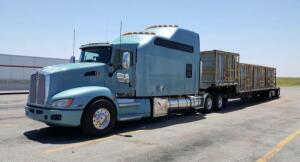 You've asked a lot of questions but I'll do my best to answer as many as I can. I guess getting your CDL depends on your situation money and time wise. You can definitely pay for a school and have more flexibility about your 1st trucking job that way but those programs generally cost a lot. There are companies out there who will train you for your CDL but afterwards you generally owe them a year and leaving before that time sometimes winds up getting charged for the cost of training, which would out you back in scenario one anyway!

Today driving a truck is very safe compared to decades ago. The "dangers" are few physically. I've never felt like I was in danger of being raped or assaulted on the road but I also walk through parking lots looking confident and with purpose. There are the occasional times when a guy will start being a bit overly friendly and starts asking questions like "are you alone out here" and such. Once I detect he's probably after companionship, which I'm not, I respond " I've got to get back to our truck, my husband's sleeping" and he usually fades away! Walk confidently like you own the place and you'll be fine! Most all major brands of modern truck stops today are equipped with several cameras for security reasons.

Knowing where you are going is a matter of experience. You'll know in a year if trucking is right for you.

Stress is a part of every new driver's experience, even the guys! The schedule you get depends on what type of commodity you wind up hauling. Food haulers and cattle hauling are often on tighter schedules because their cargo is time sensitive whereas dry van freight like a bunch of towels can take longer and less time critical. Tankers are sometimes in the same category. Some tanker freight is food grade, temperature controlled or something that changes in consistency over time like asphalt or concrete. There are literally thousands of commodity types out there. Some loads take hours and some take weeks or longer! I've hauled loads that delivered the same day and I've taken loads that delivered 10 days later!

The pay isn't great as a new driver but after your first year you can expect to see your earnings increase IF you wind up being an asset to your company not a liability. If you're a driver who plans, loads, drives and arrives on time, or early, you can expect to be rewarded by CONSISTENTLY doing that over and over. If you're a driver who cares about nothing but complaining, tears up trucks and makes excuses for constantly being late you won't do well in this industry, so a lot depends on you!

I applaud you for doing your research first. Should you decide to embark on this journey one thing is for sure: You'll probably never be out of work again so there is security and peace knowing that!