Tony, I have only been out seven months driving OTR. Maybe I just haven't had the call return to me yet. Some of my work is rig driving, some days I drive a pick up and others a forklift in one of our warehouses. I suppose the variety could be shielding me from consistent burn out that you seem to be suffering from.

I definitely don't miss all the mountain and steep incline driving, chains and anti gel. There was some independent factor that was nice but I was suffering weight gain and all.

My gig now is strict Mon through Friday so I've been able to exercise, go to the beach and work on the house again. Those kinds of things just conquer all thoughts of OTR.

THAT BEING SAID, if I started over again for CDL training, I'd be right back at Prime in the solo flatbed division. I still count straps I see on trucks and pity the poor drivers tarping in the next lot while I wipe down my mirrors or something equally taxing.

Anne and old school, good to see familiar faces (profiles). Hope all is well. I'll post an update thread soon as to not hijack this guy's entirely. 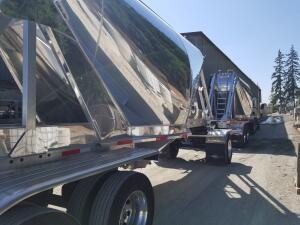 I just don’t know if I can give up the local though. I’ve got kids and don’t want to be away from them... but I can’t help but feel this desire for “real trucking”. Any help here? What would you do

There are so many trucking jobs of all kinds available right now. Not just available, but actually bidding for drivers. I applied for 4 jobs online and i had recruiters coming out of the woodwork and they're still calling. I've only been driving since 2018. I work Monday to Friday days and the job comes with many perks. The company is very organized, has 24/7 maintenance, and is very safety oriented. Your choice isn't an either/or. If you have a clean MVR , you can get anything you want right now.

I'm not a driver but have posted here about my 23 year old son's experiences a few times and will just share what he is doing in case that is of any interest to you.

He got his CDL from a local private school (not the suggested route here but it got him enough of an idea if this was something he wanted to do after dropping out of college). He worked for CR England for 8 months, was forced to do team driving and his third partner was great but then that partner wanted to do regional driving back east so my son took a Dollar General refer dedicated route which had a lot of frustrations for him (broken equipment, waiting at stores for hours before they would let him unload, etc.) The pay for some of those weeks were low due to long detentions, broken equipment, etc. So he decided to look for driving jobs elsewhere.

He looked at DOT Transportation first. Very little written about that here but those who have driven for DOT are largely very happy with their work. DOT allows flexible work schedules and pay is good. Of course, if you take a job that is 4 days on and 3 days off, you make less than 5/2, etc. Not sure if they have openings in your area. My son applied for them but did not get hired, probably not enough experience with 7 months.

Next he applied with Marten Transportation after I pointed out a posting on Indeed to him. The recruiter steered him into a position that was a bit different than the one he was looking at. He has been at that for 4 months and typically is on the road for 12 days and off for about 2.5 days. He came home yesterday morning and asked him how he likes it at Marten and he replied "I love it." He drives a dedicated route for Nestle, though some other work sometimes gets mixed in. He drives out of Stockton yard, going from from stops mostly in Springville, Utah and some other stops in Utah, Jurupa Valley, CA, Tracy, CA, Lathrop, CA, Lemore, CA, and some trips to Oregon and southern Washington. He originally reported to the regional manager but a new DM got hired and he loves working with her and she lets her know she appreciates his efforts, etc. He makes a lot less than you, last week was about $1,550 with 3,000 miles (he gets 51 cpm plus detention and breakdown pay. In his second week his transmission had serious troubles and truck was in ship for most of the week and he got paid the minimum weekly pay of $1175, worked about 1.5 days. This week he had a hazmat load and will get paid some extra for that, not sure how much. He had a hiring bonus of $3,500 which was paid at 30, 60, and 120 days. I see some posting snow for much more. He gets to bring his truck home (usually just tractor) after submitting photos of where he would park it here on our farm (he lives at home). Besides his days off, he sometimes stops by here if he has extra time on his way to a next stop for shower or even sleeping a few times in the past four months. He drives a Kenworth T680 which took a bit of time to get used to (backs up faster, different noises) but he likes much better than the Cascadia he drove in with CR England.

There is such a demand for drivers that I would think you could find something that can work for you, except all the fancy lights.