Page 3 of 5 Previous Page Next Page Go To Page:
Anne A. (and sometimes To's Comment 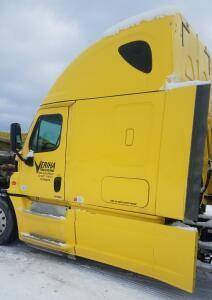 A little bit of pretrip review in the morning, and then we got on the road for more driving around town. However, since today we got it in in the morning there was less traffic. Each student got 90 minutes behind the wheel, although if they had the 8-10 students they planned on that would probably be less. I will say that an hour and a half of city driving in a semi is a lot. I did feel a lot better about today's drive than yesterday's, but that may just have been the instructor.

We have 2 driving instructors that we've been alternating with. The one I was with today and last week is more laid back and mostly lets you get on with operating the truck, unless he needs to say something. The one I had yesterday is much chattier, which does sprinkle in some good nuggets of wisdom that might not come up otherwise, but it does mean you have to split your concentration between him and the road, which is tough for a rookie. That said, it's probably valuable prep for the real deal.

After lunch we rebuilt the range after the last snow/plow cycle, and tried some more backing. Straight line went smoothly, but then I at least, made a complete hash of an offset. Just before sundown (~1600) they demonstrated the alley back, but we didn't get to try it ourselves.

Tomorrow we get to try mock CDL tests, at least for the pretrip and possibly straight and offset backing.

We had our first elimination yesterday afternoon. Since he was my roommate and was still staying the night, I felt it was indelicate to post about while he was still here.

He had been struggling for most of the class. He's an immigrant and English is not his first language. I think that certainly contributed to his struggles. Without wanting to speak ill of anyone, I do think he could have done better if he had concentrated more on learning the curriculum as presented.

Bottom line, Veriha has their curriculum and they've had success with it. If you come here you need to be prepared to follow it and keep up. If you don't, you will go home.

I'd also like to mention that they usually try to drop people early in the day, so they can go back to the hotel pack their stuff and leave without an awkward overnight stay. In this case they guy had flown up from Georgia and had been getting around by hitching rides with other students. That's not how this normally works.

Marinette is a small town in Wisconsin. There is no public transportation. Nothing is in walking distance. The hotel is in the middle of nowhere and it's 2 miles from the school. You need your own car. Bring it.

Since we are now down to 3 students, the logisics just got a little easier. One of the trainers has whatever official certification he needs to take 3 students in a truck, so he's taking us on drives around town in the morning and we're heading back to the range for backing/pretrips in the afternoon. That's all in between dodging snowstorms. I think it's supposed to be in the 40s next week. Of course, next Thursday/Friday is when we're supposed to test.

Today's road course went OK, but that is officially the part of the CDL test I'm most worried about. Trying to figure out how to handle each corner is nuts, and most of these corners I've been around half a dozen times already. I'm already terrifed of what it'll be like when I've got to do it by myself the first time.

Today we had mock tests. I missed a couple things on the pretrip, but I was OK overall. Definitely something to practice over the weekend. We still haven't tried the alley dock yet, just seen it once. So for backing we just did straight line and offset. Everybody pretty much sailed through the straight line. The offset was a little more entertaining.

The way we've been practicing the offset is to start completely behind the "box", then pull forward and right into the next lane and drive forward to the end of the range to set up. From there we do the actual offset back to the left into the "box" then continue straight back to the starting point.

The first guy pulled forward into the setup lane, stopped at the end of the cones, and honked his horn. We all got a good chuckle out of that. Then he actually pulled forward and did the backing part.

I was next. I was lucky enough to have the instructor tell me to "honk my bumper" when I got in position. I figured there was nothing I could do at that point to make it any more of a farce and relaxed. I came in a little wide on my initial setup, but stayed off the cones and was able to pull up and fishtail it in. I only used 1 GOAL. I'll call it a win for now.

The last guy was running up against sundown and I think that got to him a bit. He got pretty out of sorts, but got through it eventually. I think he took some points on the way though.

We're supposed to get more snow tomorrow, but hopefully it holds off long enought for us to get started on the alley dock.

Following and wishing you well, G! Honk the bumper; that's a new one! Sounds like you are doing well, tho. Kudos!

Re: The corners; did you see the thread in the 'general' section, re: the 'buttonhook' as opposed to 'jughandle?' Seriously, most drivers DO a cross between the two . . . but NOT during a road test.

Carry on, good sir. Thanks!

Thanks, Anne for the continued good vibes.

My problem isn't understanding the "button hook" per se. It's knowing exactly where to put it on each corner. Some you have to really put it out there, and some you don't have to put it out much at all. Some corners even have nice wide aprons to pull the trailer through so you don't even need it (and if you cross the centerline on those, that's points off), but if you're making a left through that corner you do need to button hook through the apron to keep the trailer on your side. Plus, I'm trying to learn all this with the edges of the road covered in snow so you can't even see what's there and where it is.

Bottom line: Trucks and cities do not mix well.

Week 2, Day 5, CDL test penciled in for end of next week

Today wound up being all range time. There was a big snowstorm bearing down and people decided we needed a chance to work on the alley dock. So we basically spent today alternating between learning alley docks and offset backing practice.

It was still fairly tricky because we had leftover snow, on a gravel lot, at about freezing, and getting repeatedly ground on by semis. There were some definite slick spots by the time we were done. They even went and found us a loaded trailer to practice the alley dock with, so we could have enough weight for decent traction.

I've got the offset pretty much down. At the worst I'm doing 1 GOAL and 1 pullup and I'm allowed 2 of each. The alley dock is still tricky, but it's coming along. Learning to back around corners for the offset is has been really helpful.

At this point I think I can pass the pretrip. I'm confident I'll have backing sorted out by test day. The road test still has me worried though.

The weather's supposed to be in the 40s next week. Hopefully some of the snow melts off and we don't have to worry about any more.

Keep your eye on the prize, good sir.

I have faith in ya!

Once the trucks got warmed up and moved free of the snow, we had a nice little drive today. We got out on the highway for the first time. That was actually pretty straightforward. I understand why they didn't worry about it earlier. We drove what officially "may or may not" have been the route for the CDL exam. It went OK, I've still got some rough edges to sand off.

This afternoon was backing practice. I'm still figuring out the alley dock, but I think it's coming together.

At the end of the day, they told us that we pretty much know what we need to know to pass the CDL, we just need to refine it a bit and not get our heads screwed on crossways. The rest of the week will be practice and then 2 of us will test Thursday, and the other one Friday.

More road practice in the morning and alley docks in the afternoon. I had 1 good one and 1 that fell out of the the ugly tree and hit every branch. I'm sure I'll get it eventually, but time is running out.

They gave out test times today. Mine is 1300 Thursday. So I guess I get one more day of practice.

Not really much more to say at this point.

Veriha Trucking Attending Truck Driving School Choosing A Trucking Company Company Sponsored CDL Training Truck Driver Training
Click on any of the buttons above to view topics with that tag, or you can view a list of all forum tags here.