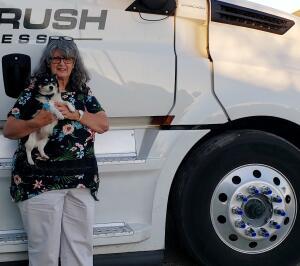 Since I am in an older 2019 FL that I started driving 3 weeks ago, I haven't let it get down past the quarter mark until these last couple days.

Had a load going from Dodge City KS to the Port of Oakland. We are not allowed to fuel in California. So I fueled in Lake Havasu City AZ, ran to the Port of Oakland, then down to Los Banos to pick up my load that was going to Commerce City CO. Since I didn't have enough hours to make it, that container was repowered in Vegas. My fuel stop was up the road at Love's at the junction of I-15 and US 93. Total miles driven was 1181 plus many hours idling in optimum idle, which seems to be at higher RPMs. By the time I got to the Love's north of Vegas, I was down almost to the "E". We have two 120 gallons tanks. I threw on 173 gallons ($1030!!). So I had 67 gal to spare. My next stop was Fernley NV, 453 mi away. After swapping containers and getting my new load I ran to the Love's in Fernley and topped off the tank, because the next stop is either Cheyenne or the new Love's at exit 250 on I-25 in Colorado...too far to make it without having to stop and throw on 50 gallons somewhere along the way.

When I know my truck, I will get down in the red during the summer but NEVER let it go pass the quarter mark in the winter and a lot of times I fill it up around the 3/8 mark.

And I'll holler at her when she does this, too!