Truck Of The Future Aims To Drive Itself

Truck of the future aims to drive itself

(CNN) -- Tractor-trailer drivers, if you text while driving in the middle of the freeway, then the future may belong to you.

If you can afford a Mercedes truck, that is.

The German vehicle maker sent an 18-wheeler barreling down the Autobahn recently, while the driver surfed the Internet for food recipes on tablet computer -- at least that's how media photos told the story.

The trucker's hands didn't touch the wheel and his eyes were fixed on pork cutlets. But that could be the way some drive in the future, perhaps in the next decade or so.

That's the message of the prototype "Future Truck 2025," which Mercedes says is the first self-driven freight vehicle. It may seem illogical right now, but the hands-off idea is aimed at eliminating human error.

Special cameras and multiple radar systems watch the road, the sides of the road, and cars and trucks behind the vehicle.

Future Truck is also envisioned to communicate with other vehicles and connect to growing sources of online information as Big Data balloons on the road.

Once the truck merges into traffic, it won't accelerate to clichéd Autobahn breakneck speeds. The system will throttle it to a meek 50 mph, Mercedes says.

Many of the component parts to put a vehicle like this into production are already available in trucks on the market: Systems that help drivers keep their distance from other drivers, active braking assistance, guidance and mapping systems, and fine-tuned cruise control and tons of other hi-tech tchotchke.

If a puttering slowpoke pulls out in front of Future Truck 2025, it will slow down automatically to keep off of its bumper, but the 18-wheeler won't pass it by itself.

That's when the driver will have to turn off the ball game, put down the iPad or lay away the knife and fork, then take the wheel.

But he'd be ill advised to goof off too much, because two cameras and a sensor under his seat will monitor his activities.

Mercedes says that the trucker will still be expected to be responsible for controlling the vehicle. But by then they won't be called that anymore.

I have NO DOUBT that this is the next evolution of transportation, for passengers and freight. Think about it. Always on time, no "home time", fewer accidents due to human error, no need to pay for drivers, their insurance/benefits, reduced costs passed to shippers, thereby increasing profit margins, etc. Of course by the time they have the Infrastructure in place and begin testing this stuff, we will all be well into our retirements...

No doubt about it. It is coming. Read Glen Beck he's a big time news guy on one of those channels CNN I think or one of the other big ones. Like you say though I hope I can get my 20 to 25 years in and retire before it comes. This technology is going nowhere unless something catastrophic happens. This guy who's very educated and on the front lines of the media and technology thinks the world going to be like the Terminator movies one day . With skynet and machines taking over. And the truth is it's possible.

Going to be tough for our kids.

Heck, that's nothin'! I've already got an autopilot truck. I let go of the wheel and it goes in the ditch every time! ;) 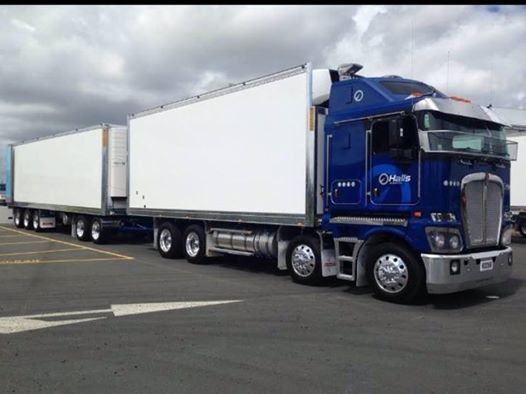 What company wouldn't get that? :P

Would be great except you would still need a driver on board and would still have to pay him. The "self drive" truck does not pass any vehicles therefore you can conclude it does not do turns either. Good for long Highway runs but for the areas that require driving skill it is lacking. Inner city driving. Adverse weather road conditions. The stop and go and Lane shifts of construction.

Remember these test were done on the autobahn which has just about the best roads in the world with well marked lines. What about the road work areas where the line markings are all screwed up? Or accidents scenes where you have to drive on the shoulder or onto the grass? What about human error like what happened to me in Oklahoma City where a mini van full of kids hit me?

While an automated truck would sound nice there is no way to pull it off with our current road infrastructure. So yes drivers will still have to be employed on the trucks and companies will still need skills people inside of the trucks.