Update On My Experience With Boyd

Can't remember the last time I've posted in here, old school you may remember back in December or so I posted on here about getting into flatbed with Boyd.

First of all, before I get into all the details, I LOVE it !!!!!! For those who haven't seen my previous post, I'm a 7 year army vet my MOS was an 88m and trucking has always fascinated me, but I never did want to just be "driving" every day and I wanted to make the big bucks so flatbed was my choice.

I was a small guy startin out, 5'7" 130 lbs and more fit than strong, these 180 pound lumber tarps and 80 lb steel tarps really made it a bit rough for a while. But now, after all these loads and tons of hard work, I'm every bit of 145 pounds and that's all muscle gain in the shoulders, chest and arms! It's nothin now to handle these tarps and work with loads slinging chains around 3 or 4 at a time or puttin a good winch down for tight straps. I think of it as a twice a day crossfit workout.

Ok back to the story lol. January 30th 2014 was my first day on my own, I was assigned a brand spankin new truck with litetally zero miles minus the 278 piggyback miles, which I now have 91,061 on it no problems whatsoever. There I was day 1 a brand new truck, after only 2 weeks with a trainer I was off with my first load, winter time super cold and a lumber load of course so I knew it was gonna be fun taking them off all frozen. Eye opener lol.

Break down, first let me explain how I am and what my work attitude is with this job and why. I do not have a place of my own, a wife, kids, not even a GF. Flatbed trucking is my world. I never get picky about loads, I don't ask to be home, I stay gone for weeks at a time, and I run as hard as I can taking what I can get.

From day 1, that attitude has gotten me to where I am now with the company.

When I first started folks, this guy here was penching pennies, had over 19,000 dollars in debt, thought I was gonna be miserable for years. But I got in this truck, built a solid relationship with those at the company who made my work for me, and did my job to surprise them as much as I could.

Right out of the gate I was on E logs and still running around 2300 to 2600 miles a week in WINTER!!! Did some canada runs here and there, at 40 cents a mile and 20 bucks tarp pay I was loving that. That's the first couple months. The cold slow bitter and harsh times that most fear.

Let me say again I was not picky about loads, I took whatever I could get and didn't demand anything. Constantly told my dispatcher to keep me out keep me movin. Sure there was PLENTY of times I had some garbage complete waste of time loads, but I thought of it all as a test. A test that every time I passed with flying colors to stand there and say I bet you didn't see that comin did ya?

So now the spring months come along, I'm comfortable with the road, excited about gettin movin more, so on so forth. I started gettin between 2,600 and 2,800 miles a week, my work speed picked up with securing/tarping and things became so easy I got greedy. The company started recognizing more and more that I was bringing in some serious revenue and things just kept getting better. Summer months I was nailing 3000 mile weeks no problem and my best being 3,800 miles! And I have all the proof in the world of that. I screenshot every single pay stub I get in my email.

Remember that 19,000 dollars of debt I mentioned? I paid that all off all at once in a matter of 2 hours on the phone. That was only a couple months ago. I still have 16,000 saved up. Priorities folks, you can make awesome money doing this if you just set your mind to it, focus on YOURSELF for a while, and come back to things later. One of my sayings is build a solid foundation, a big one,,, big enough that someday you can build everything else you've ever wanted right on top of it.

At the rate I am making money now, I am planning to throw down a nice down payment on a fitzgerald glider kit spec'd out for flatbed in spring 2016. While I may only put down 50 or 60,000 on it, I'll keep a cushion of 15,000 to 20,000 getting started. Nice low payments, get into it slow, learn the process and reap the benefits. How I wore I'm sure I'll have that thing paid off in less than a year.

Now I'm sure there's folks out there who have nothing but bad things to say about Boyd, but im here to tell ya right now, you get what you put into it. That's with ANY company out there. I'll be here to reply as much as I can I'm sure I left a lot out for discussion. Thanks ! " war machine "

Awesome post. Glad to hear your success. It mekes me feel like i made the right choice in this career change. Thank you and stay safe.

John, I do remember you - Welcome back!

It's great to hear that you are living and loving this lifestyle. That was a great post - my favorite part was:

I couldn't have said it better!

I will say that it kind of concerned me since you started out talking about how this job has helped you pay off all your debts, and then you kind of went into how your success at it is making you want to get back into debt. I'll leave you to sort all that out, but I will just say that you have done well as a company driver. Sometimes success tends to make us think there are greener pastures just over the horizon. Here's a photo of an owner operator's truck that I came across somewhere in my journeys. He summed it all up in the name of his trucking operation. 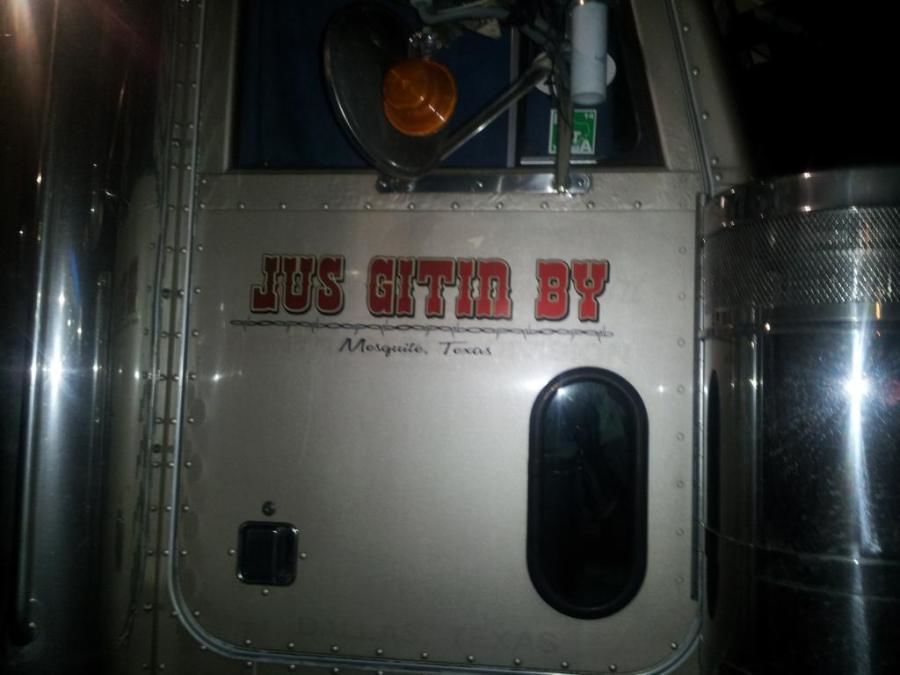 Look, it's your money, and you've got every right to invest it how you like. I'll just say that every big truck I have owned, and I've had my share, was a big money pit. The pleasure of throwing money away doesn't appeal to me anymore, and it doesn't take long for a big rig to drain you no matter how hard you are working at it.

I wish you the best, and I am really glad to hear of your success! Keep up the great work, maybe we will run across each other one day.