Page 1 of 2 Next Page Go To Page:
Greenhorn88's Comment

Officially started my daily blog here for everyone to enjoy. I'll put it all in here, the good, bad , and ugly. Hopefully not too much of the latter, but my hope is to keep running tabs for everyone to learn from.

Today started day 0 of orientation with TMC. Des Moines, Iowa, in the middle of no-where. Tomorrow will be day one festivities to include peeing in a cup and filling out paperwork. I arrived at the hotel, which is owned by TMC, at 130pm. Not too much to report on, but definitely make sure you come with money. My budget didn't allow for it, and it's going to be two weeks before I see my first paycheck, and not much to survive on until then. Lunch is provided daily, everything else is out of pocket. Looks like I'll be eating Ramen daily until I get paid. Hey, it even tastes like poverty, so it'll be great. More to follow for day 1.

Day 1 of orientation officially over. Here's a list of what you need to know. First off-pee before you leave the hotel at 0645. You will NOT be going for at least 2-3 hours after that. After you get to the orientation center, across town, you will be finding your seat in the classroom. After that, they split the class into groups of 10 to head out in a van to the place where you take your drug test (pee only) and your physical, which doesn't really differ from the one you took to get your permit at your CDL school. After the physical, you get back on the van and head back to the schoolhouse. From there, you go promptly to the mechanic's bay, where you meet up with TMC's physical therapist and proceed to do their version of physical readiness. You will go through some prolonged squatting exercises, and then move onto the real stuff. First, get down on all fours and crawl under the trailer. Next, go through, one by one, picking up the 40, and the 80lb tarp with proper lifting technique, demonstrated by the therapist. Finally, the hard part. Pick up the 120lb tarp, place it on your shoulder, walk around to the front of the trailer, and place the tarp on the trailer. Then, proceed to climb/clamber/flop your fat self on to the trailer. Next, pick up the tarp again, and shimmy it on top of a steel coil (which for short people, is about 6ft tall). Shimmy around the side of the coil and chains alongside the trailer, and retrieve the tarp from the top of the coil without letting it hit you and take you out. Finally, proceed to the end of the trailer and demonstrate the proper technique to get of the trailer. Proceed back to where the tarp is on the trailer, put it back on your shoulder, walk back to the end of the trailer, and drop the tarp on the ground for the next student. The final portion is probably the easiest, and that's to climb a 20ft ladder about 15ft up and climb back down. Next, back to the classroom to get some hot lunch (only free meal of the day), and then back to the computers to finish up some tests that are all due by thursday of the first week. You will also fill out your direct deposit forms. That wraps up your first day, which should be over by 4pm. Trust me, you will be tired by the end of the first day.

Now, notes of interest for those coming in winter. I came ahead of a blizzard that struck about 5 hours after I arrived at the hotel yesterday. The blizzard is still going strong right now, as far as wind and cold is concerned. Not too much snow, but the wind is the killer. Make sure you have sniffle gear, because winter is cold here in Iowa. The end of the first week into the second week is outside, so hopefully the wind will die down before then, otherwise I will become a human icicle. Well, that's all for today. Hope this helped those interested in TMC.

TMC is my top choice of companies. This will be a great tool for me.

I was in St Iowa for a few years, and the wind is the worst part of Iowa winters. There may not be much snow, but it drifts like crazy, and creates Hella icy conditions.

TMC is my top choice of companies. This will be a great tool for me.

I was in St Iowa for a few years, and the wind is the worst part of Iowa winters. There may not be much snow, but it drifts like crazy, and creates Hella icy conditions. 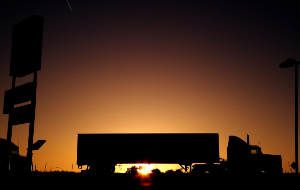 This is great!! I am hoping to be there the 29th! Plz keep us posted! A buddy of mine began this week as well so it will be interesting to see the difference in experiences.

Day 2 officially almost over. Today the class was split into 4 groups. Group 4 got off at 4, last 3 groups are here until 8pm. Today was filling out paperwork and finishing up tests and training modules. The three groups that stayed (myself included) rotated through three stations after 4. They were 1)shifting practice on the 13spd simulators (which are now obsolete as the company is moving towards all automatics with some 9spds left), straight line backing in the new 579s outside (9spd) and an hour in the classroom to finish up the modules. The trucks are pretty and well maintained. I mean strikingly beautiful for a hulking behemoth. They drive and handle like a dream. A hell of a lot better than what I spent the past 6 months practicing on at the CDL school I went to. Not much else to say about today, it was pretty straight forward. Got final approval on my medical card, although it's only good for a year since apparently the docs didn't understand the concept of not having been on meds for PTSD for 5 months. Oh well, at least it was approved, so I can officially move forward. Next one should be a standard 2 year. Pace is picking up, we'll be moving on to strapping, tarping and real world driving (as well as simualtion driving) by friday (or thursday, depending on how fast we move, being as we have a very small class)

Ok sorry this is late. Day 3. Classroom. Finish up testing and forms. Stay awake. Get called out in class for your haircut, when there's at least 4 people walking around with tattoos around their fingers, piercings in, or the remains of an ear that was gauged. Apparently the VP of training seems to think my hair was more important because it looked like a mohawk. I went to dispute respectfully, as I know it isn't a mohawk. I have the hair directly on top of my head, long enough to comb to the side. Skin tight sides and back, all the way up to the top. But he's not hearing it, so that night I had to make a call, hair or job. Even though it's bull****, I now look like a basic training recruit. Something I said would never happen again. Other than that, nothing major day 3 to report.

Ok, day four down. Met the strapping/tarping trainer today. Gruff ex marine, but fair. Gave us the run down for the next 3 days. Also the VP of the company came in and talked to us for about an hour. Did not make a very welcoming or positive speech to the class at all. I didn't let it bother me, but he kind of came off as a "if you don't like something we do, well f you and find some other company that's crap compared to us" person. I got it, TMC is a company that's mostly veterans, and prides itself on having the military standards of doing more than what's required, but at least make it seem like you value or at least appreciate the people coming to work for you. Anyways, like I said, this isn't a diary of complaining, so back to facts. After some gruesome videos that were safety related, we went outside to the strapping bay, where we will be on Saturday through Sunday from 7am until whenever learning how to tarp and strap every load we should come across on a regular basis. Also, confirmed, TMC is getting rid of all 379s and 389s within 3 months. 589s will be all that's left, and eventually they will be all automatics. Also, cameras will be installed in all trucks to "protect the drivers". They will turn on "only during heavy braking, or side to side movements, and will be off once the truck stops moving." Basically if the truck is moving, they're watching you. Tomorrow, which is Friday, will be all outside, doing backing drills. Figure is, serpentines, etc will be demonstrated and then practiced all day, from 6am until 4pm. We will be graded on these skills some time next week, and tested Sunday on the tarping and strapping portions.

TMC Transportation
Click on any of the buttons above to view topics with that tag, or you can view a list of all forum tags here.