An Observation On Reaching One Million Miles

Reaching one million safe miles as a driver is a big goal that takes dedication and commitment, and maybe even a little luck. I throw in the luck part because I have discovered that most of the million miler club members I have had contact with will use that word when referring to their accomplishment. I think when you reach that milestone you are humbled enough by all the experiences you've been through to realize that there were times along the way that you avoided several catastrophes through the years by luck alone, or God's grace, or what ever you choose to call it.

I wanted to share a different sort of observation with you in this post though, and that is the fact that a member of the million miler club gets there on his own merit, and not that of the company they work for. We see so much bashing of companies in this greatly misunderstood industry, and we try to do our part here at Trucking Truth to point out the driver's responsibility in the game of success as opposed to making sure that you are with just the right company for success. I learned this by my experience at what most online trucking chat rooms and forums for drivers consider a terrible company to go to work for - Western Express. I was very successful there by anyone's standard and built a great foundation for my career while turning out the miles there for the first sixteen months of my trucking career. In our forum when I see a new member come in here and start right off the bat by using "buzz" phrases like "starter company, indentured servitude, starving out their drivers," or my all time favorite, "slave labor!" - well, I know they need a gentle nudge into the truth, and I will usually oblige them.

There is a bi-monthly "fish wrap" publication available in most truck stops called "The Trucker." I like to look at it for current news or trends in our industry, but I especially enjoy a little section in it where Prime sponsors a section called "Prime Performers." This section shows different drivers from different companies who have received honors or accolades from their various employers, things like "driver of the month," or "top producer," or whatever designated honor a company happens to be giving to one of their drivers that month. It is a showcase of sorts that Prime sponsors for companies to show off their best "go to guys and gals." This month featured four drivers in the million milers club. They are John Pratt for reaching four million safe miles, Richie Young for reaching 2 million safe miles, and Clayton Foster and Dan Richardson for reaching one million safe miles each. Here's a photo of their pictures as featured in "The Trucker" newspaper. 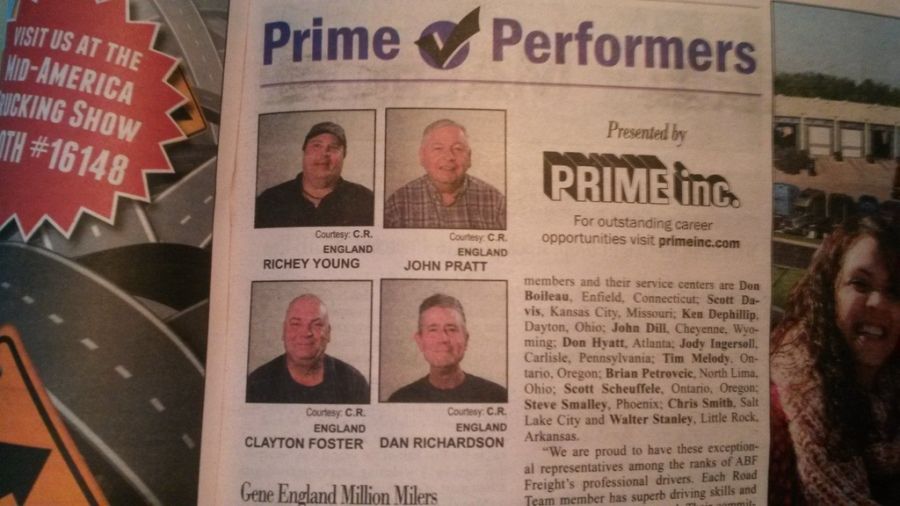 What is most interesting to me about their accomplishment is that they did that at C.R. England! Any one of you who has been in here for a little while has seen us comment on how these companies all have their "core group" of drivers who are the ones who are getting things accomplished - the "go to guys," as we are fond of calling them. Okay, we all agree that C.R. England will start you out at one of the lowest paying driver wages, but my point is that you can make a successful career there and many people do. I had trouble getting hired when I first started this career, and that is not an uncommon experience for some, especially those with some background issues. There are some companies with a little less stringent hiring policies, and that is how I got started at Western Express. Many people get started at C.R. England for that same reason, but it doesn't make them any less desirable a place to start, or to finish up at, as evidenced by the fact that they obviously have some great drivers there, some of which are featured in this publication.

Okay, my whole point in bringing all this to light is that you can start anywhere in this great industry and your success does not depend on whether or not you chose "just the right company." You will control your own destiny in this career, and if you are the type who can forge the path to success, you will be welcomed at, and successful at, just about any place you choose to demonstrate the skills and the mind set of a wildly successful professional driver.

For those of you who thought C.R. England was just a "starter company," I adjure you to reconsider that observation.

Fantastic article Old School. It seems that no matter where you look it's always easier to find the drivers who are complaining about any given company. I (currently) am working in the entertainment industry as the manager of an exhibitor (fancy talk for a movie theatre). What I've noticed is when people are happy, you (typically) won't hear a peep from them. When you do have someone who's day (or career) isn't going their way, they tend to make the most noise.

We have "Pop-up" surveys where 1 out of 3 transactions will include a survey code. We had 62 surveys returned last month (out of 11,600 issued). Out of those 62 only about 12 of them were overwhelmingly positive. The other 50/11,600 that took the time to log online and provide feedback were from guests that had some sort of service shortfall. That may seem like my employee's aren't doing a very good job... but what you must consider is the other 11,550 people who were issued a survey didn't have anything to complain about.

You bring to light a very good point others should consider. When I hear drivers inquire about a company that's hard to find reviews for.,. Yes, it's possible that they are just a smaller operation...on the other hand, perhaps the employee's there are just happy.

This is the type of thread that will help somebody out who is struggling with the decision to become a driver after being exposed to all the negativity on the internet. I'm grateful that I stumbled onto this website when I first became disillusioned. My wife and I were initially very excited to have found a career that I'd enjoy and would support our growing family. Needless to say, it doesn't take long to second guess yourself after hearing all the noise - mostly on trucking forums. That's where this forum is different.

Thanks for the post OS. I saw this publication at the Smithton truck stop in PA off I-70 - just took notice of it the other day. I'll have to pick up a copy this coming week.

Here is the online edition of the current issue. You can find the "Prime Performers" on page 33.

When I hear drivers inquire about a company that's hard to find reviews for.,. Yes, it's possible that they are just a smaller operation...on the other hand, perhaps the employee's there are just happy.

That's the way it is at West Side Transport. They're smaller with 550 trucks and their drivers are happy so you just can't find too much information on them.

Fantastic- Anchor and O School- on line edition of The Trucker is neat!

What is most interesting to me about their accomplishment is that they did that at C.R. England!

C.R. England has added 3 drivers to its Million Mile Club.

Gerald McCaul has 1 million safe miles. He has been with the company for 9 years and has been a trainer for 4 years

Sandy Wilkes has 1 million safe miles. She has been with the company for 15 years as a driver and trainer.

Randy Immoos has 4 million safe miles. He has been with the company for 23 years and has been a trainer for 21 years.

As Old School originally stated, these are all amazing accomplisments coming from a company none other than C.R. England! They must not be so bad after all huh?