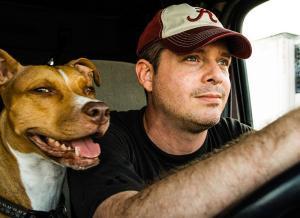 The last time I was in Missouri was for basic training in the Army 17 years ago. I had flashbacks when the Greyhound stopped at Fort Leonard Wood. I’ve been in orientation here at Prime for a week now, and I just got cleared by the skin of my teeth. At the beginning of the day the head of the student training program said that at the end of the day there would be one student left with him that hadn’t cleared yet, as that’s the way it always is. It turned out to be me. I had hernia surgery about three months ago, so they needed a work release from my surgeon in order to give me my DOT medical card. They faxed what they needed to my surgeon on Tuesday, I immediately followed up with the surgeon (who had already sent it back before I even called), yet somehow it took until about 5:30 Friday afternoon to clear me for medical. So even though I passed my permit test on Wednesday, I haven’t yet been able to go to the DMV to pick it up because you have to have the medical card to get your permit. I’ll be getting it in the morning, and I won’t be official and able to go out for my training until Monday, while most people are leaving tonight with their trainers. But that’s okay, because I can use a down weekend to catch up on sleep (my roommate snores loudly and constantly), and I’ve already got an instructor who doesn’t mind waiting until Monday to leave for my CDL training. So it’s been stressful waiting for medical to clear, but all in all it’s been a good week and everything turned out all right. There are annoyances, but it’s how you deal with them that makes all the difference in the world.

The simulators seem to be used more for the purpose of racking your nerves than actually getting better at driving, because the instructors barely instructed except for showing us how to double clutch. They just sat back and let us figure things out, and acted like we were idiots when we messed up. But when it’s all over and your nerves are frazzled and you’re feeling embarrassed for taking 20 minutes to NOT back into a dock while 15 other students are watching while they wait for you to finish, the instructors’ attitudes change and they say “Don’t worry, it’s just practice.”

Since I haven’t gotten my permit yet, I haven’t been able to go on the pad yet and I won’t until Monday. DEFINITELY come here with a permit from your state if you can. I wanted to, because of course everyone here on Truckingtruth.com says you should, and my recruiter said I should, but I didn’t have the money to get a physical before I came here. I knew I would be at a disadvantage, I just had no choice. And it really did set me behind, thanks to the whole surgery thing. On the other hand, my roommate came here with his permit, but it didn’t show in the system. Apparently because he had just gotten it on Saturday. So he took almost as long as I did to clear, since they had to straighten that out.

Any little thing could be an issue here. They are VERY anal about everything, from background checks to job history to medical. If you don’t list a job, they will know – they can see your work history on a computer. I don’t know where they get the information, but they get it. Someone on another post about Prime said that the interview consists of them checking your written application against your online application. Nope, that’s not what they’re doing. They’re checking your written application against work records and criminal records that have nothing to do with the information you’ve given them. If you’ve worked somewhere or broken a law (whether convicted or not) or even had a ticket thrown out, they will know. And if you don’t tell them before they find it on their own, it’s not a good thing.

I’ve tried to give the aspects of my experience that maybe aren’t described in other posts about Prime training, or to expand on things other people have said. Other people have done great jobs of describing minute details of what orientation is like. I don’t want to get into every little thing, like the food and the rooms and stuff like that. If you’re overly concerned about the food you’re going to be eating for one week or the room you’re going to be staying in, you’re not focusing on the right things. I really thought this post would be much more organized, but I haven’t slept well this week so I’m REALLY tired. So you get this rambling account. Sorry. But I’m excited to start this new chapter in my life. I’ve read so much great advice on this site, and I can’t wait to start putting it to use and eventually offering some of my own.

Paul glad you got it straight, but it's just minor as you already realized. I think you have a great attitude. Some folks don't and are destined for failure from the start...Your covering other aspects is a great thing, expands the knowledge base for those coming in behind us....I hate the news about your instructors use of the simulators. I don't know what ones you have, but being a simulator instructor for 12 years in law enforcement and a consultant with a top notch manufacturer I don't like hearing news like that. Simulators are great tools if used properly. But as with everything else you can have instructors not well versed, or worse don't believe in the value they can provide and makes them totally useless. Well I guess they could be a very expensive video game. Hang in there, and things will be on the upswing very shortly it sounds like...Above all be safe out there....

Don't get me wrong, I wasn't complaining about the simulators. If you have time, you can always go back after you've finished your five (I believe it was five) modules, simulations, scenarios, whatever-you-call-thems, and practice more. I just think that their main purpose in putting you through the minimum five scenarios is to get acquainted with the shifting, and to rattle your nerves. I'm not too concerned with the small amount of time I had on them, because I know this is a great training program and they know what they're doing. I honestly think there's a rhyme and reason to why the simulator instructors did what they did. It was definitely a test of my temper, because they were talking to me like I was stupid, when I asked a very reasonable question while I was driving. But as soon as I was done, they were cool again. I think they're testing your temperament more than anything, because they obviously don't really expect us to know what we're doing yet. I mean, they just taught us how to shift five minutes earlier! Because I spent so much time dealing with trying to get cleared, and because I didn't already have my permit, I didn't get any extra time on the simulators, which is disappointing. But my instructor I'm going on the road with is supposed to be really good. Two-time instructor of the year, if I heard right. So I'll be in good hands.

I just finished filling out an online application for Prime. I got turned down by driversolutions who train people for PAM and USA today for whatever reason I haven't asked them why yet. I have only worked about 6 months out of the last 3 years though and I'm afraid thats why everyone is turning me down. I guess we'll see. I'll post on here when i hear something.

Ok Paul got it, sorry if I misunderstood your earlier post. It's just I've seen people use them very improperly which gives the students a bad taste in their mouth and never even get a chance to get any value from it. Also the scenarios are meant to teach thought process, not mechanical skill. There will never be a replacement of behind the wheel for that. Shifting can be very stressful for some, so I can see what their doing on that. They are killing 2 birds with one stone so to speak before you get in the truck.

Bob you will have to fill out a federal form for DOT for your unemployed time but its not an issue at all as long as the reason was being in jail. I had not worked in a year, filled out the form explaining why and was off and running.